Post news RSS Release in 2016, and hammering the graphics

Busy development times continue with hammering the graphics, redrawing NPCs and bringing some eye candy in the darkness. The next version is now scheduled to be released as early in 2016 as possible.

We dreamt of releasing the new version still this year, but after serious considerations about what's still left to do it turns out to be impossible. It's only a month before holiday season and we're hardly at alpha stage. Renewals and improvements we've been dealing with are just plain massive and a month won't suffice to finalize and test it all. So, we'll be releasing the next version as early in 2016 as possible. It's a schedule that allows all the upcoming awesomeness to be perfected even better - as follows:

Long, dirty, oily, sweaty days with hammering the graphics engine into a brand new shape. I don't bore you with details but it's quite a feat to do this big data structure changes and still maintain savegame compatibility. As you can imagine with the current fixed tile-sheet size and fixed tile proportions we've been using lots of code customized solely for the current format. That why the engine gets seriously hammered and the whole logic of map drawing is being renewed to quite extent.

At its' current the stage the version in development probably uses around 60% of new graphics engine and renewed tiles, but the more I keep abandoning the old code the more code replacements there need to be. Nevertheless, the outlook is settling in nicely day by day. Lately NPC redrawing was initiated. Even though the next version is not yet the major graphics update, we're already increasing NPC tile size and giving them proper perspective and two facing directions: 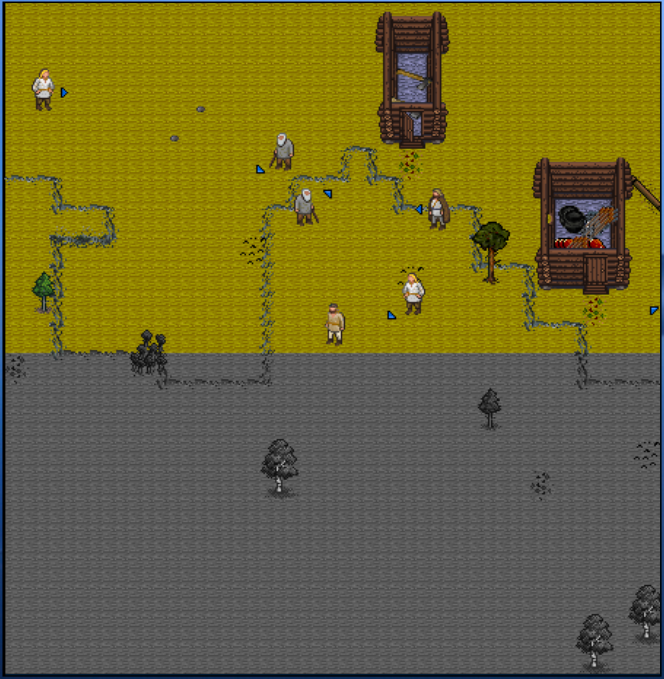 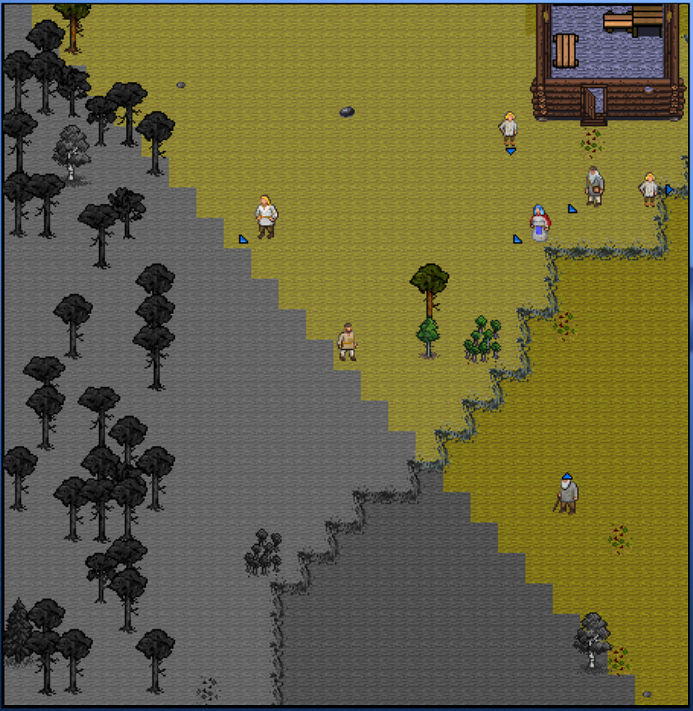 Notice pigs in the pen. Also the animals have got two facing directions now. 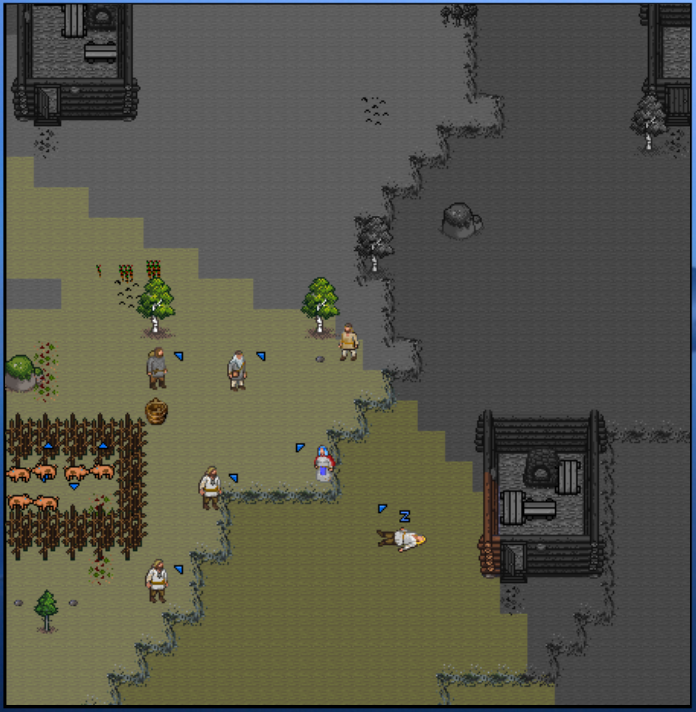 Circle Of Light -- An Eye Candy In The Darkness

It's been months since the day and night lighting cycle was featured, and back then it was left at "to-do" phase how the light sources (ie. burning fires) would interact with darkened palettes during low visibility times like winter nights. That question and how to handle it has been bugging me every now and then but now it's all sorted out and we've got a bit of eye candy in the darkness.

"It'd be pretty cool if fires and torches gave the surrounding tiles a fire-coloured tint."
That's what Stove said on the forums back then, and many agreed. Me too, as you can see in the screenshots below.

The first one is in the winter forest, and the second one in the autumn forest. It's pitch-dark night in both cases. By the way, that circle of light isn't fixed but keeps flickering too. (Now you can imagine how much more cosy it looks and feels like to sit by the fireside in your warm cottage during the darkest seasons.)

Campfire circle of light in a pitch-dark winter forest: 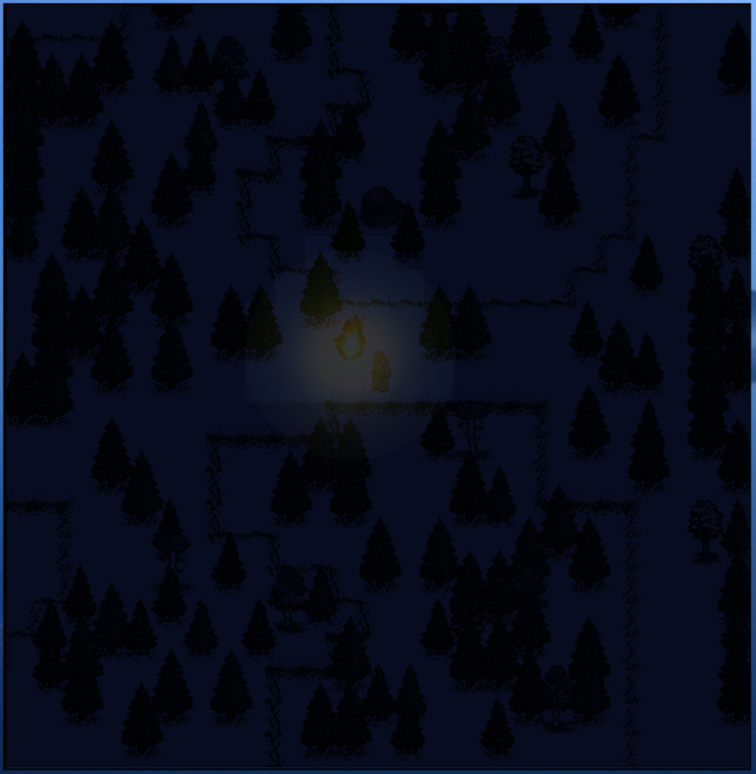 Two campfires and their circles of light in a pitch-dark autumn forest: 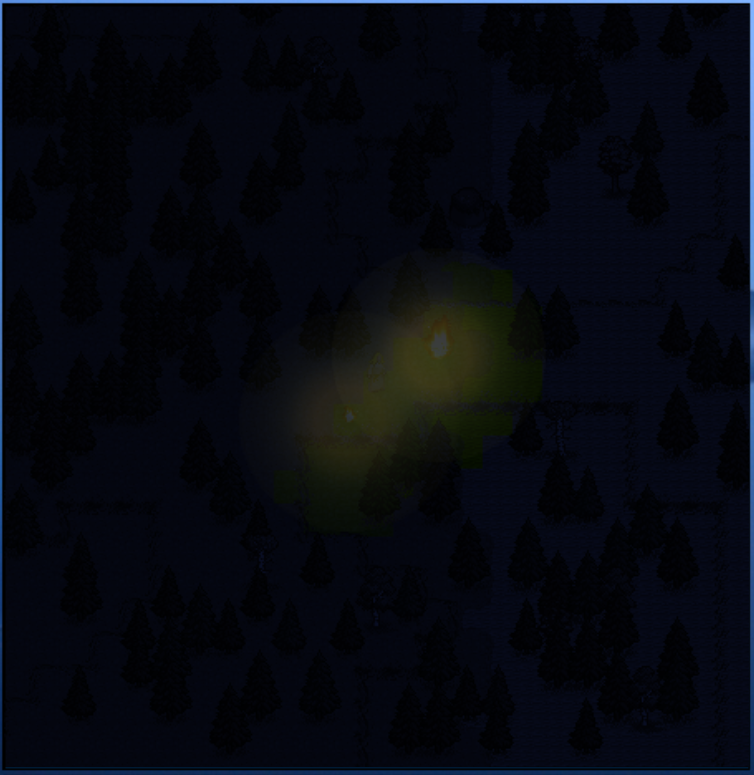 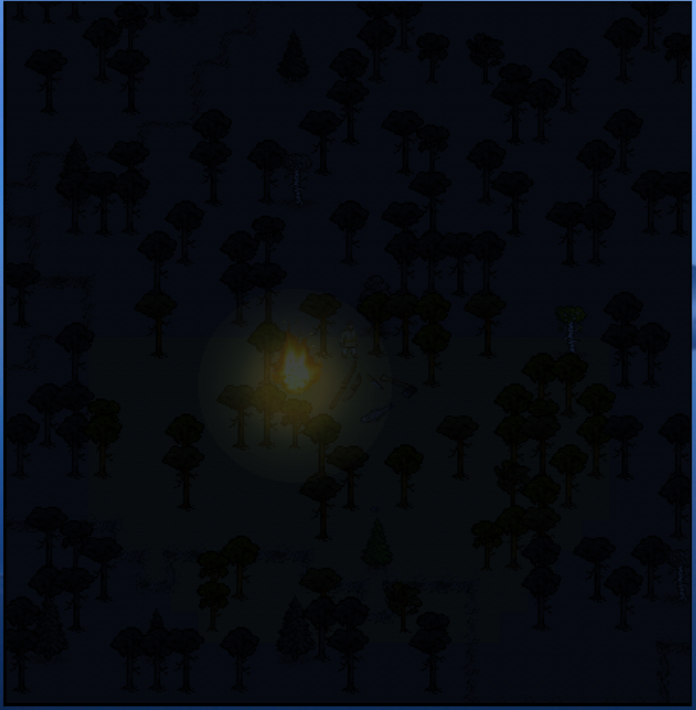 The first snow - in real world

The first snow has come turning the long dark autumn into bright white early winter.
Busy development times continue in a different color-scheme.
I want YOU to remain patient. 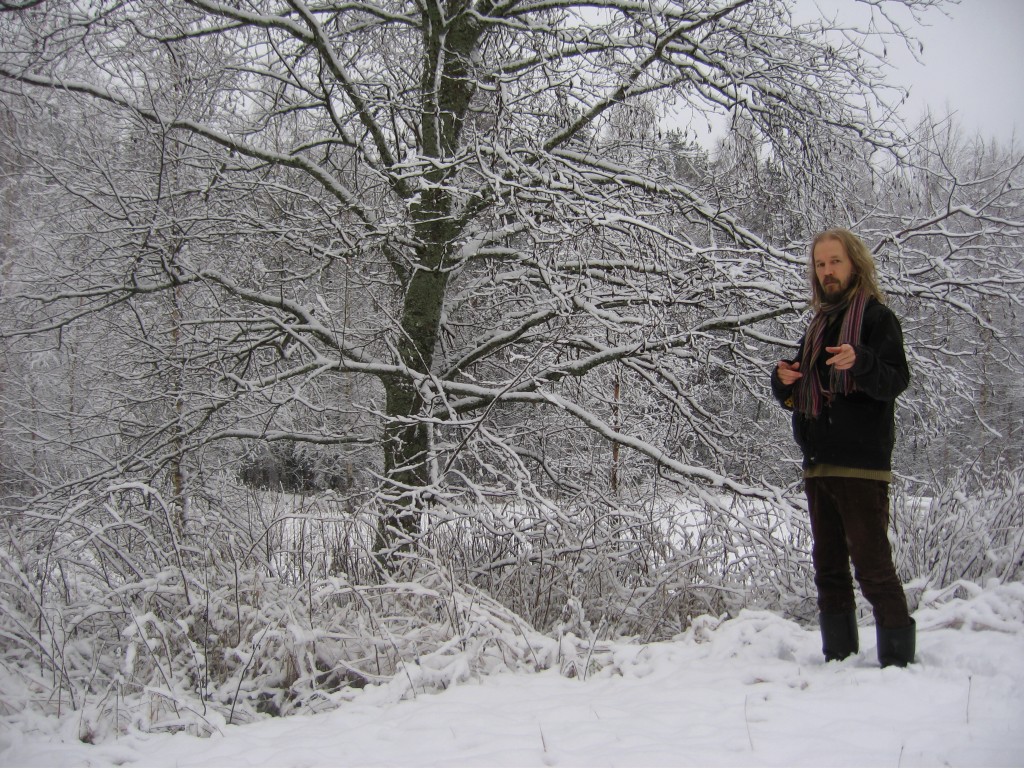 I really like those NPC tiles. A welcome improvement.:)

That looks wonderful and very atmospheric! I'm really looking forward to the next version. Please accept my humble admiration for your great work - I don't know anything similar to it both in creativity and in originality. I wished there were more people so dedicated to their game like you are. It's always a pleasure to read the news about your developments.
All the best to you!

Wow, it's a big change in the art style. It will feel a lot different now. But I like it, nice job.