In this Iteration was planned to add the Statistic History Feature for Persons. Also the Linux version should work now. A big change is the new Construction Storage behavior, that should make it way easier to deal with multiple construction sites.

In this iteration the Steam Playtest started. Part of the feedback was bug reports, that we couldn't analyse, due to missing info :( to prevent that in the future a new Problem Report tool was added. It can be reached by the player pressing F11 in the game or using the "Problem?" Button at the top left. Its sending the current screenshot, Savegame and other data that are useful data to analyse the Problem. 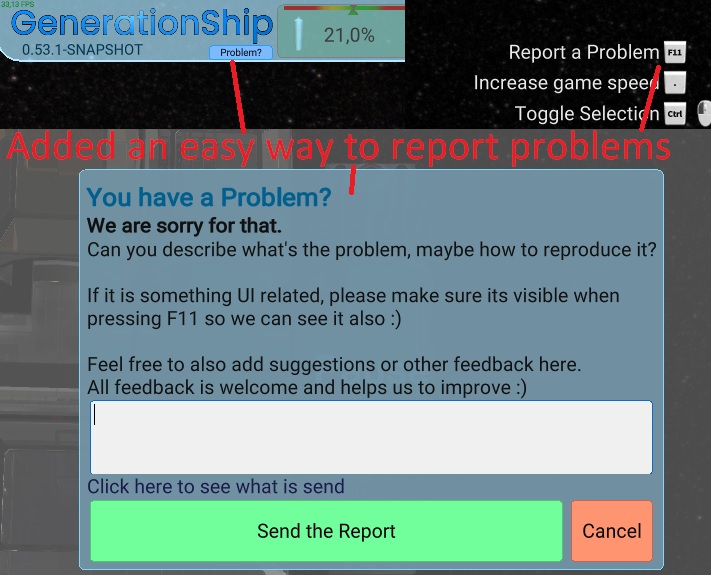 The PersonDetails have now also a history included. Its showing the time using of the person in real-time of the last 24h for now. In further iterations, i plan to add more details and different timespans. For now, its just differentiating work and service usage (so sleep is the same color as eating).

Zoom to mouse from Overview

When zooming in with the Mouse Wheel from the Overview Perspective its not zooming directly to the mouse position, so its way faster to switch to different parts of the ship.

The algorithm for the Timespeed animation has been redone. It warps way faster, also longer periods, so the waiting times are way less, to speed up the game pace if you want it.Also the timewarp buttons not acting smoother. No more need to double click, they just add the value to the current timewarp if the skip Timewarp is already active.The timewarp is also not longer FPS dependent, so it should be the similar timings on all pc's.

Before, the construction sites created connections to other storages. This had several problems: Once initialized with a storage, it was not reacting on changes of other storages anymore and were fixed to the first chosen storage. The storages was also flooded with many connections. The build priority could not be handled and much more.To improve that, i changed the behavior of the construction storages instead. The storage for constructions have now a separate connection for "Building lots" checking for it. This means, it can be prioritized as normal, without handling every building lot.It causes big changes in all parts of storage-handling, so it took a while to fix all of it. So what we have now?