In our development blog #5 we talk about level design, UI, new animations and 3D models, and what is more important about seamless travel as a one of the most difficult parts of any open-world MMO.

Notice: We respect the desire of the IndieDB community to get familiar with the new projects within IndieDB, so we decided to publish regularly (every 2 days) previously released reports on our IndieDB page, until we catch up with the current ones. By the way, you can read all the reports on our website.
Reign of Guilds roadmap - combines all development reports at one place.
And here's our Development blog #5 (originally released 08/31/18)​

It is the second county from south to north on the eastern mainland where the climate is cooler.

Tulglas is the administrative centre of the county. It is located in the cosy bay formed by main freshwater artery of ROG world. Similar to Harbourmaritime trade and extensive commercial exchanges thrive here with the other counties.

We found new architectural solutions for the county. You can meet them everywhere, except southernmost and northernmost cities and villages.

Counties of the outer circle (i.e. entry level) would have 2-3 additional villages without banks, associations, auction, trading space. But there would be NPC, portals, respawn places. It reduces burden on the starting locations.

In addition, we reconsidered the concept. Now every county would have 12-15 mining locations. The range and resource level depend on the geographical location. Total resource level will remain the same. It was intended to reduce any possibility of monopoly through the one TOP-guild zerg.

Last time we talked about the role of castles in the ROG world and prepared basis for its creation. It was about picket fences, wooden platforms and towers, stone walls and also about gates. The larger part of the castle siege is connected with the gates.

Entry level castles (15 and 30 lvl.) will be surrounded by wooden picket fence, also they will have 4-5 towers, and all necessary buildings will be located on their territory: keep, barracks, armory, forge, and also a tavern. Furthermore, this castles has small lookout forts. These forts are important strategic positions during the sieges.

More information about forts, their role, process of capture and division of castles into internal and external parts will be described in the next article.

Our team started work on the important element - user interface or, simply put, UI. The challenge ahead is to make UI pleasing to eye, user-friendly, clear and fitting into the setting and visual ROG style. And now we are ready to show the results of the work on the main player screen which includes HP and MP bars, energy, compass, clock, equipment, hotbar, chat, buff panel, and interface to control the groups. This, of course, is not the final version and everything can change. 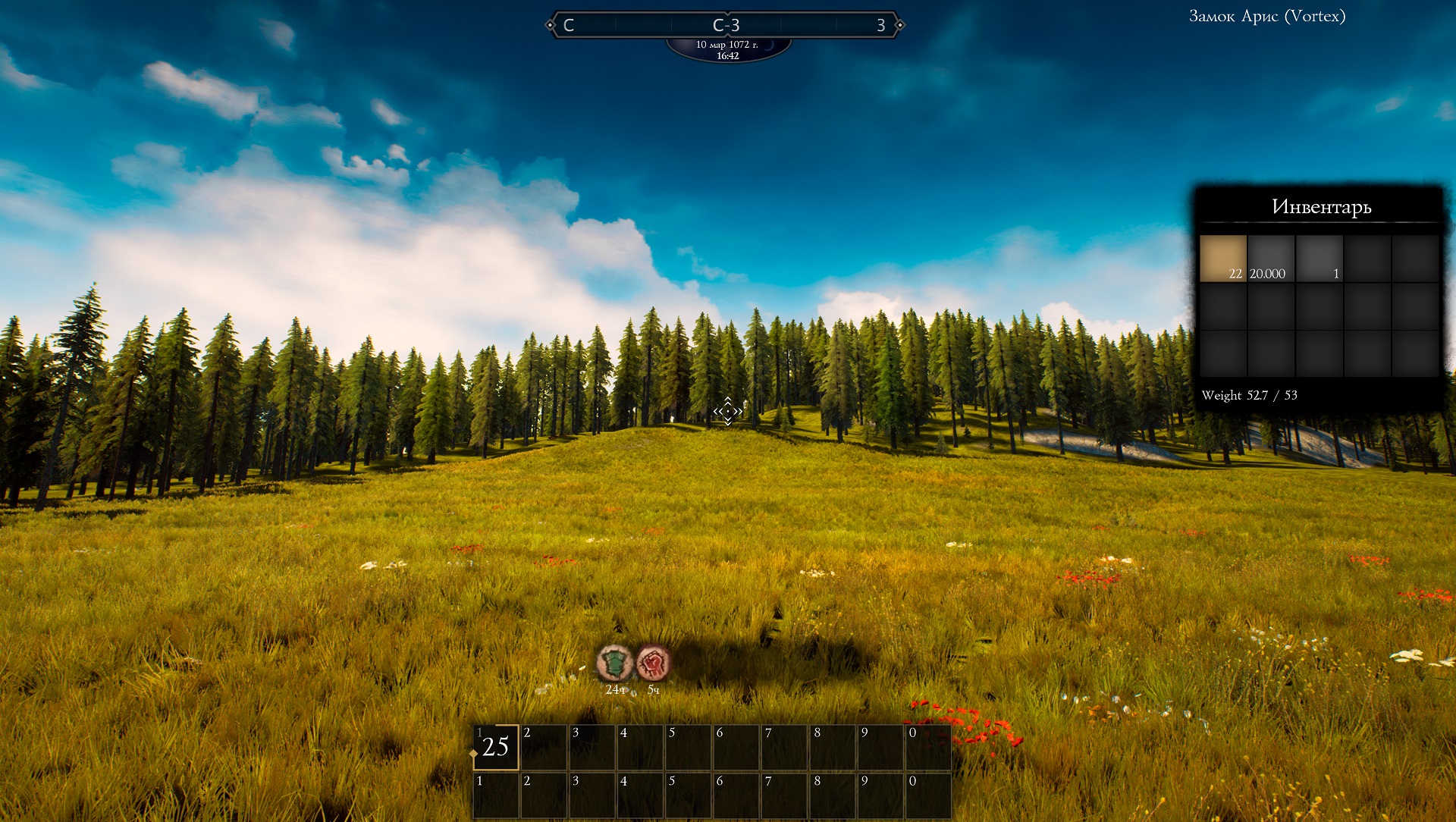 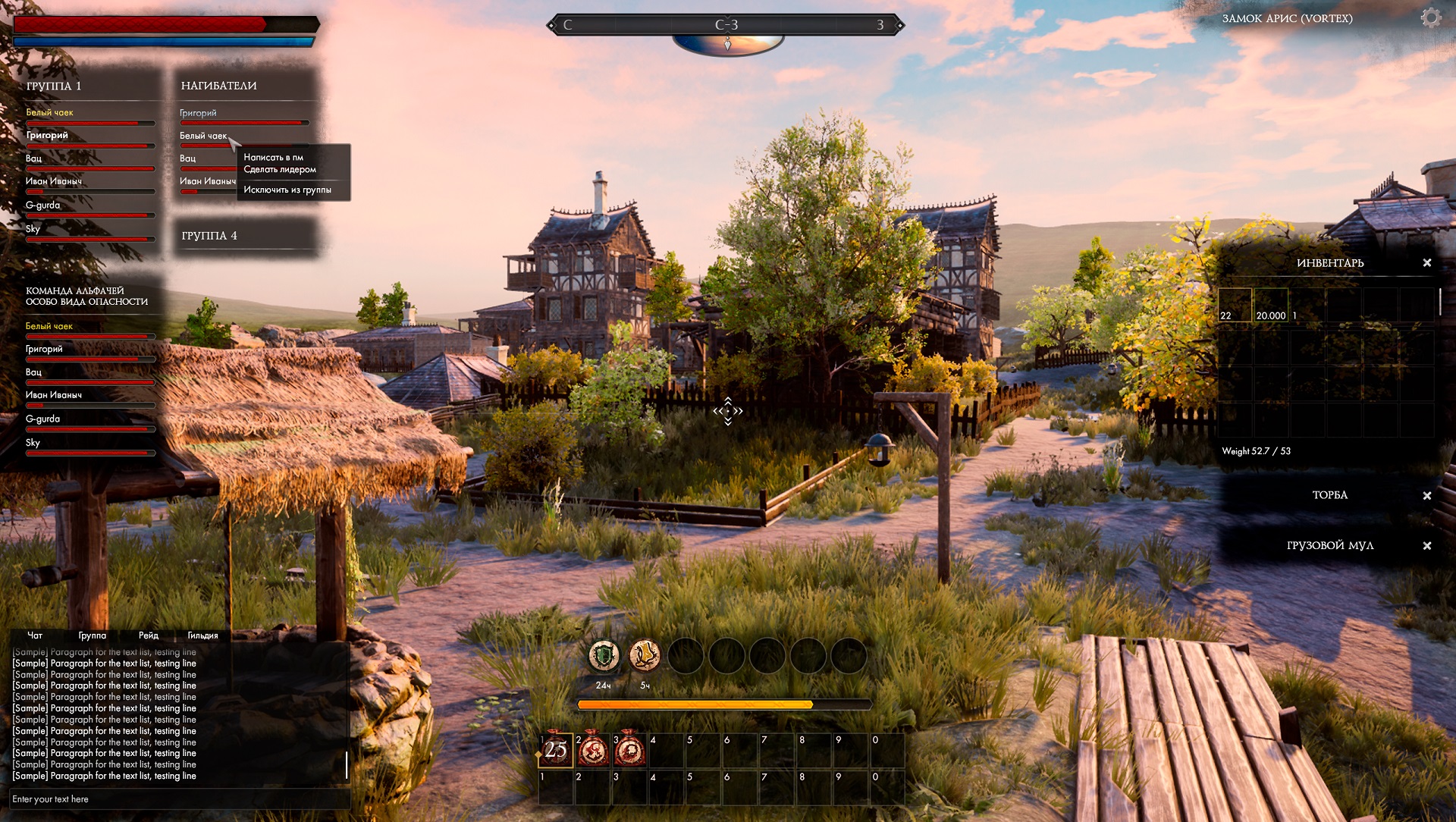 Initially, the larger part of animations after prototype should be transferred to a new character with the necessary corrections. However, quality requirements are not static. That’s why we decided to redesign about 80% of animations and to correct 20%.

The reason for the new animations falls not only to our aesthetic point of view but to the creation of new combat system 2.0. It will become more dynamic, sneakier, and harder. In addition, new version of engine let us redesign the rebounds mechanic. It became more vibrant in terms of code.

But, fortunately, our new animator can easily handle it!)

3.2. Animations with shield and sword

All maps in MMO games are divided into many servers unbeknownst to a player. Using the case of WoW, Ogrimmar hosts one server, and Durotar the other. At the same time, it is not a problem to move from one location to another. These locations are divided by huge gates. When you go through the gates, the previous location becomes hidden from view before you can see the next one. Thus, disconnecting the previous server and connecting the new one, a player does not suspect that he hosts completely different server. This technology is called Seamless travel.

This is one of the most difficult parts of any open world MMO. In some games the transition between servers poses many technical problems, including disconnections, dupe of items, zeroing of equipment. The prevention of such problems is our priority.

At the moment, the seamless system is already added to the PTR server, and testing is about to start.

5.1. Models for the buildings constructor

Our team like to optimize the process of the creation of different objects, that’s why we prepared a whole set of logs of varying lengths and thickness for the gate constructions and other buildings (maybe even sauna). A wide range of logs let us create many variations of using it. A possibility of applying one of 6 materials (light, light aged, dark, dark aged, and materials with mold and moss) will make every building unique.

5.2. Models of the commodities and resources

Commodities and resources we can divide into 4 main groups:

We already told about places and ways of mining in the previous articles. And now we want to tell about the models of the commodities and resources.

5.3. Models of the armour and capes

We can boast about new 4 tiers of medium armour.

The first 4 tiers almost doesn’t show metal elements. It is based on the quilted and woven fabric and leather.

This armour is universal, i.e. without profession requirements.

We don’t forget about decorative elements of the outfit. We prepared the sets of capes in different colours and prices.

Among these capes there are some models that player can get only for pre-order.

However, it should be recalled that the capes and shoulder pads are rather social element. It almost doesn’t have any useful characteristics for a player.

Hand on heart, we can tell that we are satisfied with the increasing speed of work on the project.

Alpha-test is not far off. Information about it will be sent to every participant on the email (the number of participants no less than 12 thousands). Our team looks forward to the start of this new and important stage.

We intend to enter the final stretch before alpha-test and we will meet:

See you in the world of ROG later!