In which the Redux Demo has a significant update; more polish is applied to combat audio; the combat tutorial becomes more reliable (and a bug is fixed in doing so); the top of a tree is felled; the model for the second level is split; and old data is automatically removed.

The big news this week is that a significant update to the Redux Demo has been posted!

As before, you can get it on Itch or IndieDB:
Thaumaturge-art.itch.io
Indiedb.com

I hope that you enjoy it, and let me know what you think! :D

And with it, a short video depicting some of the update's more-salient changes:

As to the things done in the week just past--the release of the abovementioned demo and video aside:

To start with, I continued to tweak and polish the sounds used in combat, both in the audio-files themselves and to a degree in how I handle them internally. (I now have a means of setting the overall volume of various sounds, for example.) And indeed, I believe that I'm rather happier with the current audio than that of the previous demo!

Fixing this was fairly straightforward: the landing of the player's attack put the enemy into a state in which its AI method wasn't being run (by design)--but the combat tutorials were being controlled by that AI method. The solution, then, was to instead have the combat tutorials be handled by the enemy's general "update" method, which is run even in that "paused AI" state. 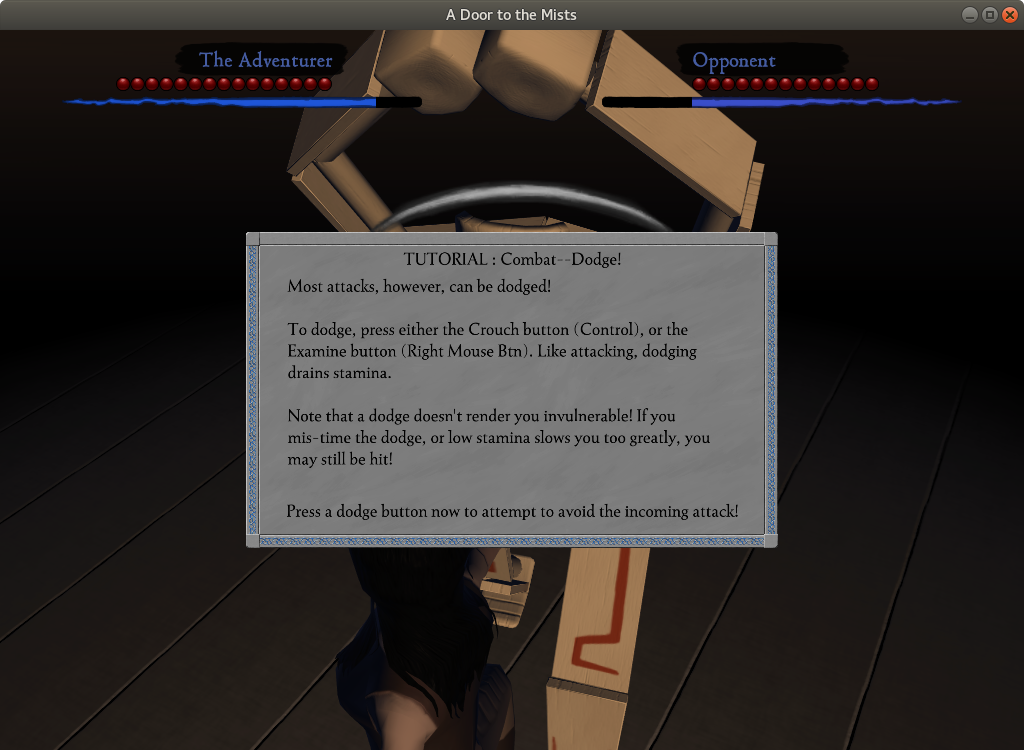 (And in dealing with this, I discovered and fixed a bug in which enemy attacks seemed to land without transition if the enemy was hit during the telegraphing of their attack.)

Moving over to level-design, I made a last-minute change to the second level: There's a tree in that level which the player is expected to climb. For the most part, I was happy with this--but did also at times find that the very top of the tree made for some slightly-awkward traversal.

So, given that this tree appears early in the game, and that anything appearing so early should generally be extremely easy from my perspective as the developer, I decided to cut off that troublesome top. And that's what I did: the top of the tree is now gone, leaving traversal up there much less difficult, I do feel! 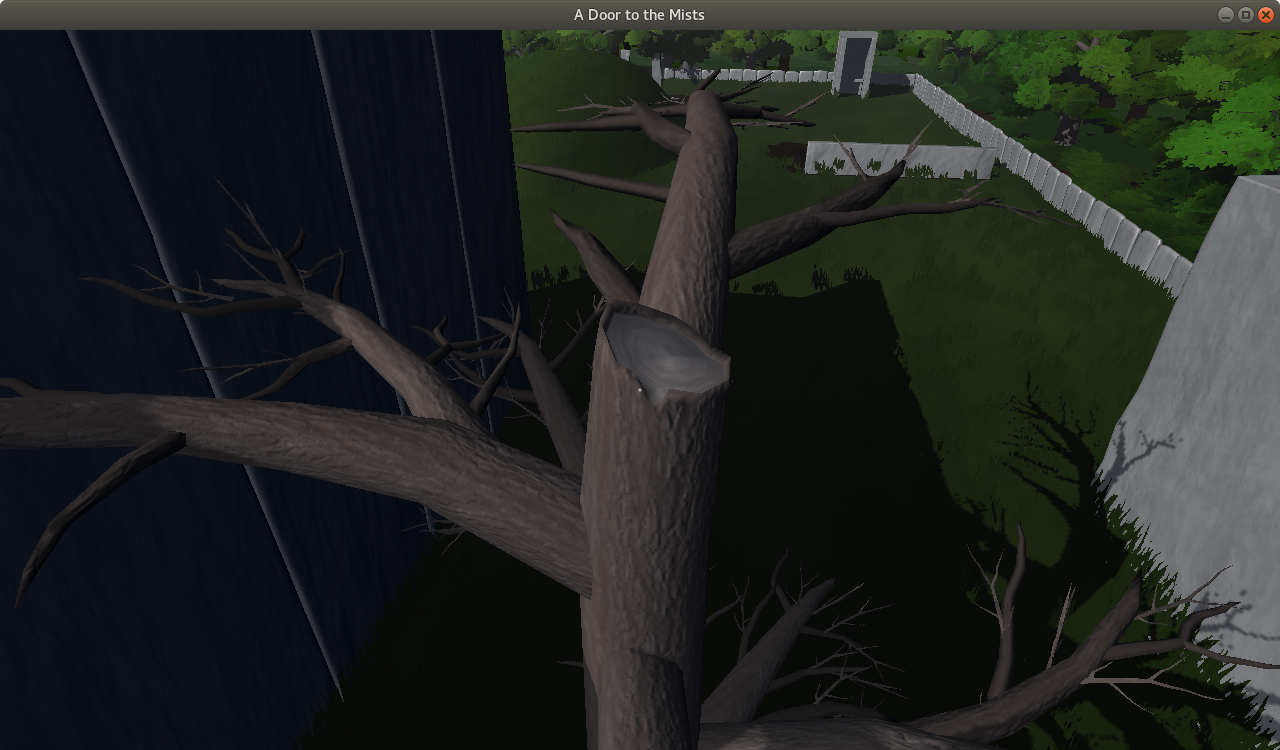 Speaking of which, you may also recall that I mentioned in last week's blog post that the game now has the means to load level-models in parts, and that I'd split up the third level accordingly. In the week just past, then, I furthermore split up the second level--something that proved beneficial when I came to make the above-mentioned tree-cutting change, I believe!

And indeed, the difference when exporting from Blender and importing into Panda, and especially when generating a build, is quite amazing! Previously, builds took hours to complete, and eventually rendered the computer effectively unusable until done. Now, building for a single platform takes all of about fifteen minutes, with only a little impact on the responsiveness of the machine! (And building for two platforms--i.e. Windows 64-bit and Linux 64-bit both--takes less than half an hour.)

Speaking of builds, and thus of the demo-update, I realised something troubling ahead of the release of that demo: some of the changes meant that old saves or config-files could potentially be problematic. Loading an old save could potentially cause changes to not appear, or even result in a crash.

I wanted, thus, to clear out this old data from a user's system. But how to do so? Deleting files automatically might be seen as undesirable by players--but asking players to do it themselves could be easily missed, misapplied, or appear suspect, depending on execution.

I asked for advice, and what I was told was this: Do it automatically--don't require that players do it for me--and inform players that it's happening.

So that's what I did: the game now checks for a special file in the game's user-data folder. If the file isn't present, it assumes that the data in the folder is out-of-date, and erases it. It then shows a brief message to the player, informing them of this action.

Hopefully this will prove both effective and acceptable to players! 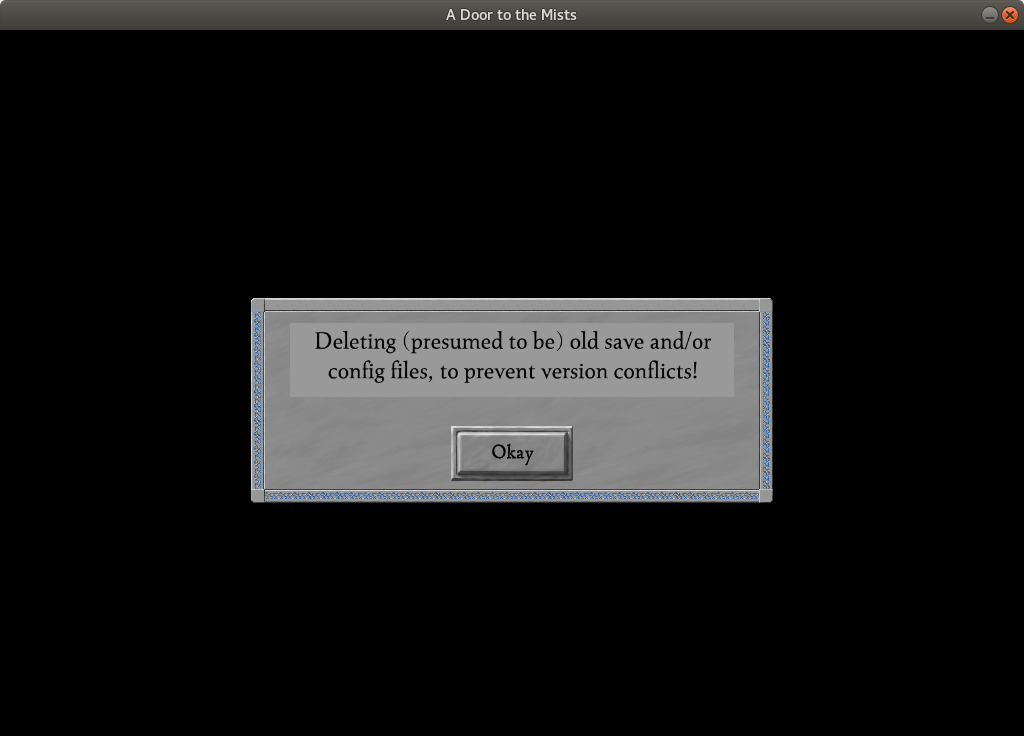 And along with all the above were a variety of other changes, fixes and tweaks that don't seem worth detailing here!