Hello Everyone. Things are taking a little longer but more and more features are coming together right now. Here is a list of the recent developments and what you can except soon.

Construction Animations
I was planning this for a while now and finally I could make a first version of this system. Without performance loss each object can now grow piece by piece. I will add this animation for each building one by one to replace the placeholder scale-up animation we currently have.

Performance note
Shadow rendering is not very efficient right now and I noticed on a slower machine that the game can run very slow. Also the shadow options seem not working properly. So if the game runs bad on you machine it can be related to that issue and I will provide the option to reduce shadow quality that really aids performance. In the long run I will also be able to improve overall performance so that higher quality will also run on slower machines.

Refactoring and labor force
As you may know this game is mainly developed by one programmer (2 days a week) and myself (up to 4 days a week). That is not much workforce at all.

Usually we are very effective and get things done without major tweaks and issues afterwards. Although from time to time you must maintain code and one of these things was our Entity-Component system as well as the AI system. Originally it was developed by myself, but my programmer had a few ideas to streamline the system.

What I try to explain is that it took him about 6 days to make these changes which results in 3 weeks as he can only work fixed hours per week. Also this prevents me from doing anything game-logic related. That is the downside of such a small team.

Therefore, we will only make such changes if they seem necessary and provide a benefit to the development process. With the growing number of components/features it was necessary to make this change. Adding new features is now much easier and some aspects like saving the data is automated by that framework.

As a result the video was delayed and I want to update it once the new features are in the game. 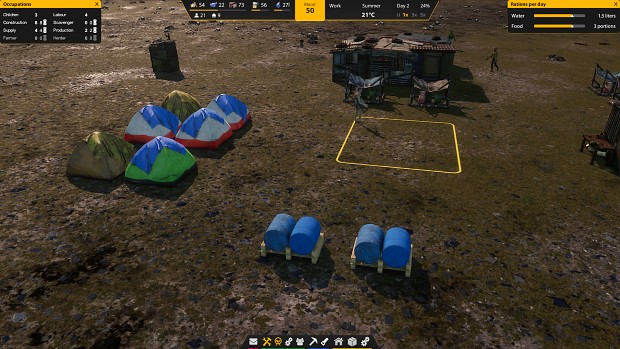 Weather and season system
I was working on the weather model and came up with a rather simple solution that seems to fulfill all requirements. For example the weather should be predictable and consistent. For example, If you play three matches with a slight change of rain then the average amount of rainfall of all three games shall be similar and not rely on luck.

Here are two graphs which show the same weather seed with two different parameters. If it is cold enough rain will turn into snow. You can notice for example that thunder is much more likely in summer and very unlikely in winter, which is usual at least here in Europe.

The major benefit of this system is that it can be adapted quickly by providing different presets. Later in development I plan to offer different scenarios like hot and dry weather or heavy winters.

Rain sounds have been added, too. Thunder, wind and all the other sounds will be added step by step.

Texture Streaming
Currently the load times of people are very slow. I therefore added async texture creation so if you have many people in your city and load a savegame for example the people may remain grey for a while. Later I will improve this to load much faster, there are several ways such as utilizing the GPU.

We are improving the agriculture and livestock aspect of the game. Farming is already part of the game and will be updated with the next build.

Cattle is in the making but I cannot promise that it is in the next build already but most likely in the second next build.

This is becoming so awesome. Continue the good work, guys.