We have a lot to share regarding what’s happened in the world of Railgun over the past few months! The team has been working extra hard staying on track with the high level overview of our goals for this year. Our current trajectory allows us to release a public beta and alpha, as well as a finished product, by the end of 2016. We’ll have more information on these releases in the near future, so be sure to follow us!

Posted by FullImpactGames on Mar 1st, 2016

We have a lot to share regarding what’s happened in the world of Railgun over the past few months! The team has been working extra hard staying on track with the high level overview of our goals for this year. Our current trajectory allows us to release a public beta and alpha, as well as a finished product, by the end of 2016. We’ll have more information on these releases in the near future, so be sure to follow us on IndieDB, Twitter, and Facebook.

We’ve conquered GameACon! With roughly fifty indie games on display, this year’s show presented some very stiff and excellent competition. The crowd was pleased with the progress on Railgun, and the judges were too! We took home the “Game of the Year” award for 2015! Our team was thrilled to receive this honor and would like to thank everyone involved in making this year’s convention happen.

With the exception of the more complex weapons currently in development, we have a very solid core to the game. Most of the game play mechanics have been refined, so we plan to focus on game design and level art moving forward.

Our biggest game play update is the team’s decision to incorporate alien enemies. Our hope is that it will give the player sustainability throughout the game. Meteors, asteroids, and comets will still rain down throughout the stages, but we now have structured stage endings that require defeating an alien “boss” to advance. We’re really excited about this as it opens our imaginations up to so many possibilities. Our organic enemies are still in the design phase, but keep your eyes on our social media channels for sneak peeks and more information. Now, on to a few more of the updates the team has implemented since the start of the new year...

Animation : We’ve added firing animations to the Railgun vehicle’s auto cannon and shotgun as well as jump animations adding to the realism and feel of the jump mechanic.

Blink : A stylized attack/defense mechanism, the blink effect allows the player to quickly teleport out of a sticky situation. Skilled players will appreciate that it also serves as a powerful attack destroying anything between where you blinked from and where you blinked to. Online and operational blink saves as effectively as it destroys!

Alien Bomber : Space invaders have arrived! We finished the first pass on the new alien bomber enemy. This evil extraterrestrial drops sticky bombs that damage both the Railgun and the track. We still need to make some tweaks to its movement and patterns, but this baddie poses a challenging new threat to players. 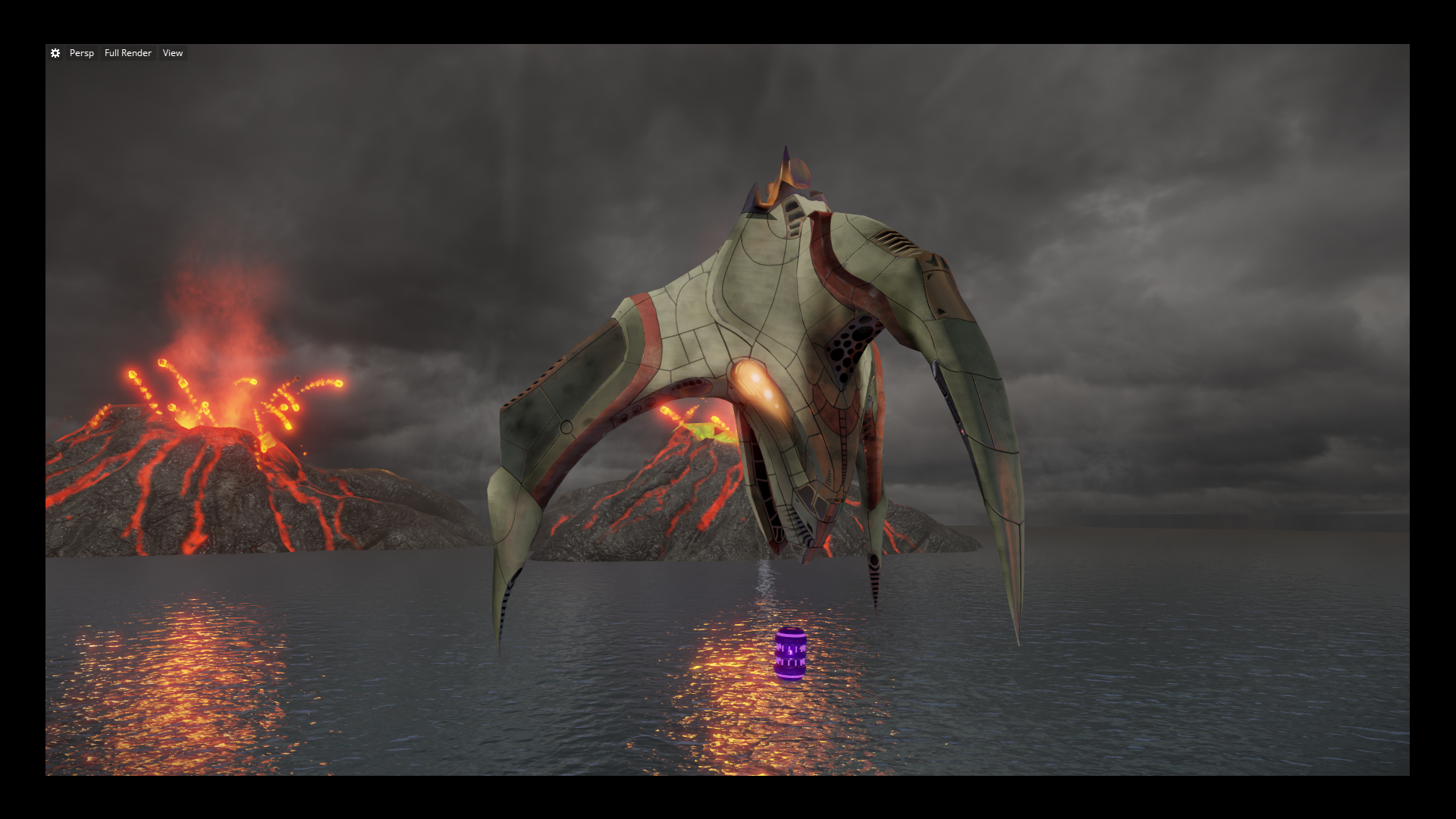 Magentoids : Devilish magnetic magnetoids seek out your destruction. Quick reflexes, fast weapon switching and a certain amount of panic are required to deal with these metal seeking bad boys. Be quick or be dead.

Comets : Our comets are cold blooded… literally! When a player is hit by one of these newly designed projectiles, they become frozen in place and vulnerable to attack. Tip: You can use the blink ability to avoid a direct hit from a comet.

Audio : We’re excited to announce that the very talented Matt Harwood has joined our team as lead audio engineer. Matt has worked on games like Homefront, Bit.Runner, and Infinite Crisis™! His first project since coming on board was to create audio queues that notify the player when they are switching weapons. This has vastly improved feedback as the player no longer has to look down at the UI.

Game Progression : With the addition of the new alien enemies, we’ve implemented a stage structure that consists of enemy waves and boss battles. Once we have all the mechanics in place for this format of progression, we’ll be focusing on enemy behaviors, patterns, and groupings.

Art : With the addition of a new artist and renewed fervor from the current art team, we have made major leaps forward in the art of the level. Roads and details are now present in the cities layout, animations on the ships, textures coming in and a more complete look overall is now obvious. With some luck, by the end of quarter 1, 2016 we should have the city laid out and ready for fine tuning, detail work and destruction animations. 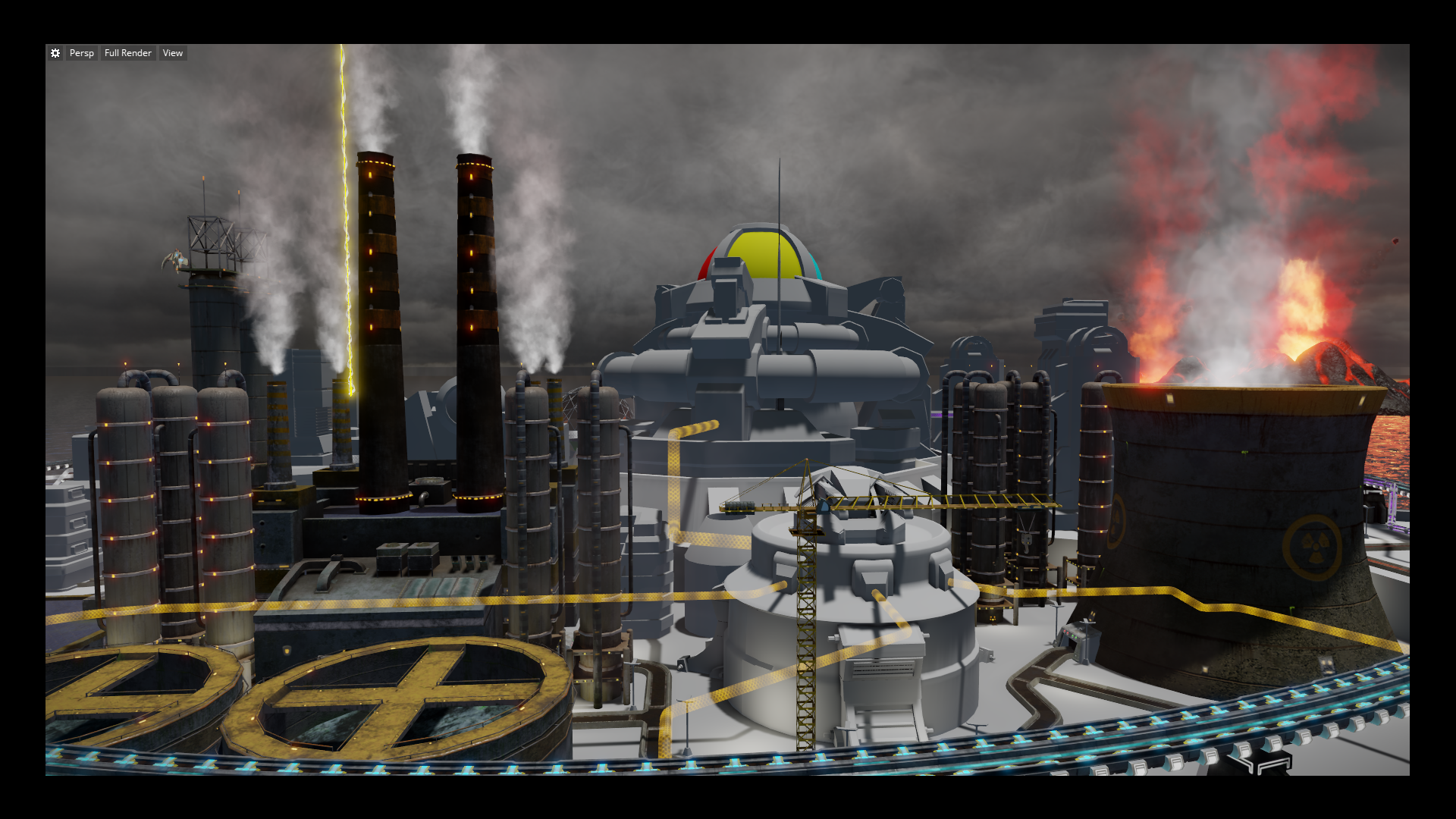 We’ll be working hard over the next couple of months to get the remaining weapons systems online. We’ll also be finalizing each section of the city with textures and additional art assets. Scoring, stage progression, and unlocks will be the next big systems we work on. The team feels that it is vital to thoroughly test the balance and sustainability of the game. Once we have all the core enemies and weapons in place, we can start putting together the puzzle on how the stages will increase in difficulty, how points will be awarded, and which unlocks will become available. The team is also working on creating assets to drop health resupplies on the track using the cranes you see in the video. These resupplies will be essential for player survival and the key to reaching higher levels.

We have quite the task ahead of us, and we look forward to you coming along on our journey to play a FUN game by year’s end!