Rage Runners Launch to OUYA is now Official. Check out our newest trailer, and a explanation of what to expect with Rage Runner. Coming soon to PC!

Posted by hypercanestudios on Mar 26th, 2013 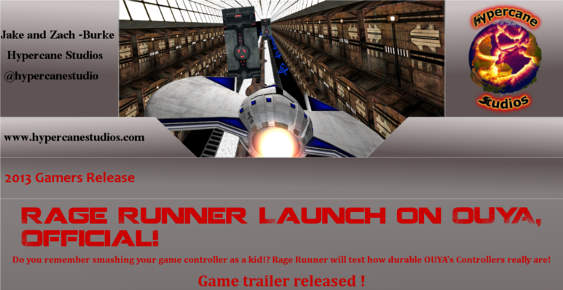 Fellow gamers, in the following days, do what you must to bolster your egos. This may mean moving out of the parents house, taking those training wheels off your bike and learning how to cry like a man. The dudes over at Hypercane Studios today announced the release of Rage Runner for the OUYA game console. Rage Runner’s self-heralding as the biggest gaming challenge since the era of square game controllers is a resounding reminder that, in the indie world, your mom does not make your video games for you.

Fast, Unforgiving Action with No Apologies
Rage Runner puts gamers in the cockpit of a rockin’ spaceship, the goal is to go fast and not hit stuff. The action is fast and the collisions are unforgiving. Gamers will need to flex their memories and sharpen their reflexes if they hope to survive the dubstep laden trenches of Rage Runner.

In retro-arcade fashion, the top 5 players get to boast to the world by etching their initials on the highscore server. The top ranked player each month gets ultimate bragging rights when his/her initials are branded onto the actual spaceship for all players to see.

Rage Runner includes an editor that allows building full-blown custom levels that can be shared with the community. All of the levels included with Rage Runner were made in the same editor. The features of the editor will be community driven and the most popular user generated content will find its way into the game itself.