Hello once more fellow space adventurers, here I am to bring you a new Questverse report, so, lets see the main things which happened since the last report

Append 1:
Forgot an interesting bug fix, which is the fact now you can play on linux without using terminal

Append 2:
Vote for up to 3 favorite concepts from the 3 main npcs of each race, the one with the less votes may need to be revised:

So, at my last Questverse report I showed the first demo(pre alpha though) of the project, and the first demo I ever made of a game since 2007(I had 17 years back then), that is a very good, as there is a difference to the 2007 small project, which is the fact Questverse is much more than that previous demo from eons ago(which wasn't serious) was. Interestingly a couple of things from that small, old project(called Bioweapon) made their way into Questverse.

I though the linux version would work well for my fellow game followers, since I tested it before releasing; but I soon discovered bugs which I hadn't anticipated(big thanks to AlexVSharp for telling me one of those), a thing all software developers face sooner or later. The demo was(and is) in a pre alpha state(it is not even a alpha yet or a full game pre alpha), and will remain that way for quite some time still, so that was expected. I soon also released a windows version, first 64 bits, then 32 bits, and also found some bugs, running windows tests with 4 friends helped me to locate and already fix some of those. 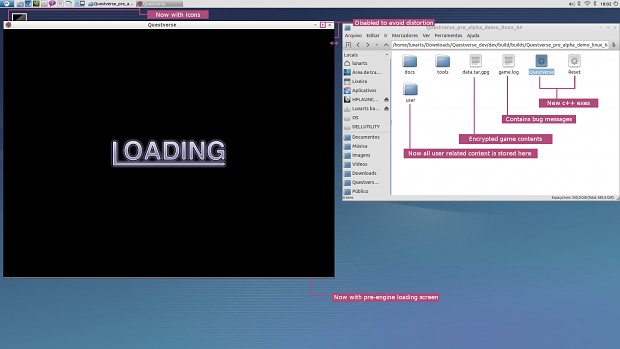 I'm currently porting the most recent changes I made to the linux version of the game to the windows one, so I can hopefully release an update this month for windows(linux already had his); after this I will have to fix just two more bugs on windows, and I will get back to the interesting part of the game(this time permanently) and to fixing non indispensable and non hard to solve bugs. Needless to say I halted progress on the space map and first quest until I fix those issues, I like to first solve nasty things and only then things I find more interesting.

So basically what happened, from older events to more recent ones were: 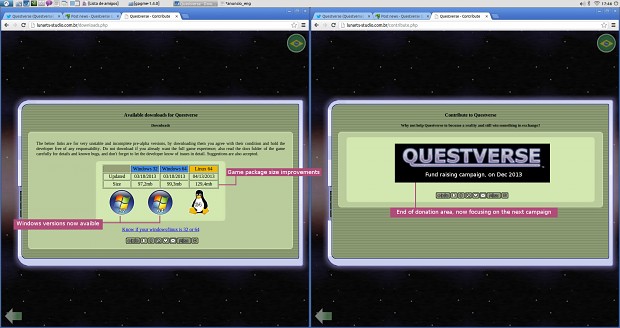 That is it space adventurers, visit the site downloads section of the game site at least once a month to check for new releases, as for the windows users, wait just one month or a bit less, I'm almost done with porting the linux updates to the windows version(hopefully). To check further updates visit indiedb for graphical updates(if those happen) and check the game twitter which is to the right of this news article for more detailed and frequent text reports.

Thanks for your visit, I hope to see you again at the next bimestral report, which you're liking the progress on the game and which you can participate on the game development, be it contributing with game testing data, tips, constructive criticism or/and by talking about it with people which may too be interested on it.