We wanted to talk a little bit about events and how they are organized, the branching paths of your syndicate, and the flexibility of dialogue. Branching quests, extended replay value and event density make up what is largely meant to extend the game from our base game plan, and what most of the Kickstarter funds will be used for.

Copper Dreams features a very open-ended campaign that is filled with intrigue, combat, puzzles and bureaucratic bookkeeping. (Minus the bookkeeping, your agent has the Operations Department take care of that.) As we’ve said in the main page, we are holding true to our philosophy behind Serpent in the Staglands to give you a very hands-off experience. We find that this is the most rewarding type of game to play, which means no quest markers or auto-populating journals to coach you into what to do. There is a joy to following street addresses to mysterious locations that just isn’t the same with a pop-up patting you on the head for your orientation skills. 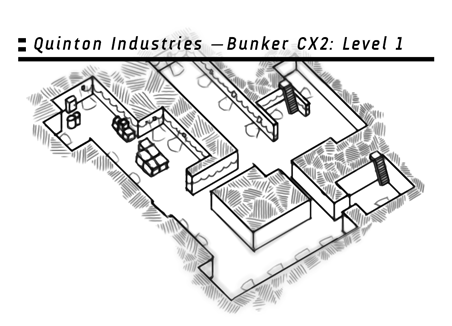 Copper Dreams is ripe with corporate espionage, conspiracies, and mysteries hidden throughout the city. Without a narrator or journal telling you what clues you found, you get the reward of actually piecing together the puzzle that is the city of Calitana and discern how you want to frame your findings.

Your reports influence how your syndicate operates, and the fate of the characters you meet will begin branching very early on and determine how Wolffz Bay plays the game of corporate warfare.

We’ve structured the experience by having your character being employed as an Agent of Asset Inquiries at Wolffz Bay Shipping and Services. As an agent of one of the more ambitious (if worse off) syndicates on Calitana, you benefit from a headquarters to rest at in their district, frugal amount of supplies, other agents to convince to come with you and intel for tracking assets. You’ll also be provided living quarters for you and your companions: a cozy little shipping container near the Wolffz docks! It's no log cabin, but it has a terminal, lights, a cot, and ample room to toss inventory items around, what more does an agent need? Don't get soft.

At your job, you’re assigned assets to inquire about throughout the campaign that change depending on the outcome of previous missions, your extracurricular work, or how you’ve decided to frame the information you’re giving back to Wolffz Bay. Your syndicate starts the game providing you with large, open-ended events, which aren’t time based (or are long durations you don’t have to stress too much about).

During these syndicate events you may find smaller tasks to do, and those can have timed elements. There's a day/night cycle which coordinates Calitana happenings you'll want to be savvy to. Timed missions vary in scope and are mechanically meant to only allow a certain number of rests before they can be completed, or are instead altered in a larger way that changes the nature of the mission and potential outcomes.

This also reflects a more realistic and sensible world where time exists for NPCs as well. For instance if you are dropped off in an enemy compound searching for an asset and must leave before morning, you can’t afford a rest. If you have 24 hours to detain an asset, you have time for one rest. Going beyond that time, that asset may be captured by another syndicate, move to another location you need to discover, or be killed.

Non-syndicate quests range from large scale mysteries to solve, to ones with urgent timing, and inter-company issues like giving traitorous employees a severance package. A Wolffz Bay Agent can also be a source of aid in their district and you might find yourself aiding the civilians under your protection. You have a range of events that keep your agent busy in an open city and island to explore at your leisure - just make sure to bring some hardware if you're treading in hostile districts.

If there is a rogue agent that needs intel and you would like to help him, dragging confidential data diskettes into the dialogue screen (literally handing them over) will turn the flow of your current conversation. NPCs retain their personality and character to drive the conversation. 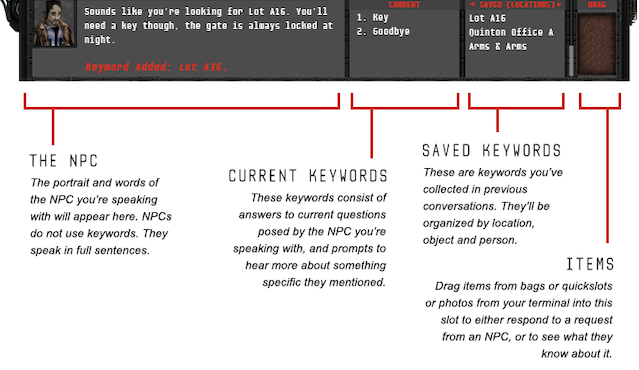 In a nutshell, a keyword-based dialogue system will involve conducting conversation through keyword prompts while the person you are talking to is discussing in detail their responses or questions. There are mid-conversation keywords that adapt to the conversation at hand, and also global keywords that are stored which you can ask different people about (more on that below). If you’re having a conversation about Agro-Fax with another agent and he says something along the lines of “Agro-Fax supply routes are something we’re gunning after," “supply routes” would be a keyword that would appear to continue the conversation in that direction.

This system works by always making the keywords generated in tangible ways, not just being somewhere or watching something happen. Instead you need physical evidence or spoken evidence to generate those keywords to be used.

On Calitana, you are both a victim of the surveillance system as well as an active part of it. At the start of the game you'll receive a camera that will allow you to snap polaroid-size screenshots of objects and people as you're exploring. The camera acts like any other usable item, allowing you to click on a target to take a picture. After taking a picture, it renders it in your terminal and is tagged with the name of your target and the location.

This photo essentially acts as a keyword: target name + location. In dialogue, pictures can be accessed from the terminal to be dragged into the dialogue screen. Suppose you’re tasked with finding a rogue agent and see a Wolffz Bay employee at an Agro-Fax building. You can inconspicuously snap a picture of the employee with that location keyword attached, and then be able to convey and initiate that dialogue path.

You can physically drag an item from a backpack or quick slot into the dialogue screen to get a reaction for it. This would be used for items you retrieve, but also to learn about something foreign in your inventory. 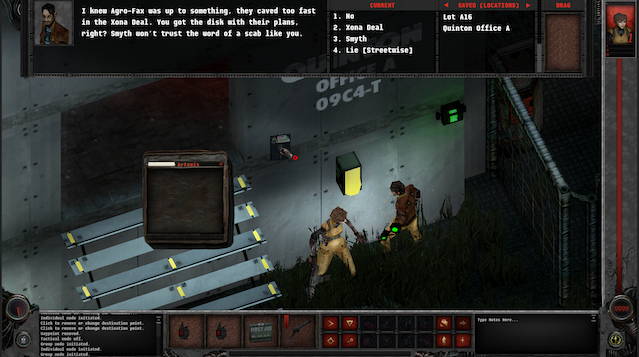 Dragging a diskette into the dialogue screen.

For example, if you’re tasked with discretely searching out empty lots that could be used for weapon storage for Wolffz Bay, one way to do it is finding a business in charge of the lots, sneaking in at night and copying a data diskette of all existing lot entries. That’s something you could turn in, but if you are trained in Hacking, you could also break into protected files and print correspondence with other syndicates that could be added to the conversation. Doing this could prevent tension with another syndicate who might have been planning on buying all the lots, or allowing your syndicate to act first.

In that same scenario, talking to an employee of the lot business during the day could also get you that info, or the location of another free lot depending on how convincing you are. In situations like these you don’t get items, but saved keywords. If he talked about “Lot A16”, that would become a global keyword you can use from that point on. 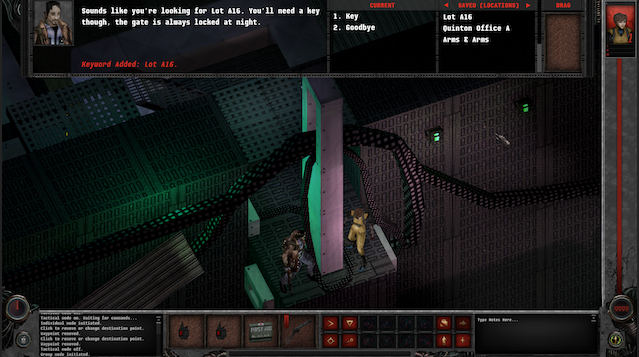 Thanks for the keyword, buddy. Conversation Skills

Some keywords can be augmented with your aptitudes or virtues to act as a pip-count check. Keywords can also be actions relevant to the conversation also augmented with aptitudes or virtues. For example, the Streetwise skill will help you in all forms of deceit, while Mercantile will give you an edge when speaking with merchants and cybernetic artists, as well as anyone you're trying to bribe. We’ll have an update diving into the character creation process of distributing virtue points through backgrounds and how you train to improve your skills and aptitudes.