Notable Additions as of Sept.26: -leveling up, selecting one of the 6 attributes -working towards the end-goal of the Water Cave: new rooms, & lighting adjustments -Arena lighting improvements -console command book item

Last week primarily involved cleanup and bug fixing on the engineering side. However, one new primary feature has been implemented, the use of attribute points. This means leveling up your character!

What’s an RPG without attributes?
In The Arcane Relics™ there are 6 attributes players can choose from. When a character gains enough experience points they are rewarded with an attribute point which can be spent on improving one of the six attributes for their character.

The attributes, and general plans for what they will do, are as follows:

The ideal goal is to make characters capable of upgrading only a single attribute, or any combination, and still have valid techniques or options to overcome obstacles presented. For example, a very strong warrior can hurl boulders at his/her enemies, and make up for lower vitality by wearing heavier armor. A more barbarian-style character could spend more points on vitality. This would make him/her capable of taking just as many hits while wearing little to no armor, without losing the benefits of speed.

In addition, a console command book has been added as a handy debug reference, or for those that would just like to tinker.

Andrew has been working towards an end goal in the Water Cave. At the end, a preliminary dungeon has appeared behind locked doors with hallways leading to a mysterious room (also notice the new braziers/fire bowls): 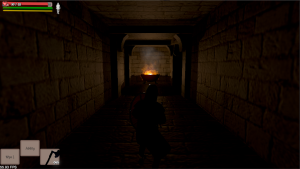 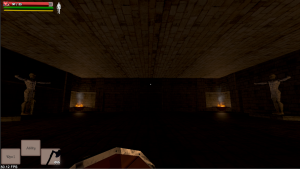 The lighting in the Grand Arena has been improved as well. Here’s some 4-player split-screen action in the arena: 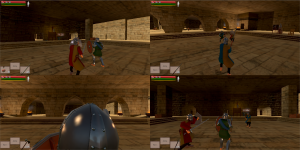 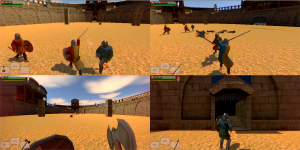