Posted by CorrectureGames on May 5th, 2019

New build is up! No huge additions, but quite a few important fixes and overall polish.

New stuff:
Wage level implemented - this might cause higher unemployment than before. I've attempted to offset this by increasing abour demand overall, but it might not perfectly offset things.
Unemployment welfare affects wage level.
Health insurance cost is now affected by overall health levels.
FDat file type deprecated from saves.
Changed plop costs and upkeep costs for each building.
When there's no power or a lack of power, less of the city will light up at night time.
Health yields from hospitals and clinics increased.
Policy costs adjusted.
Funding for crime prevention added.
You can no longer place buildings when out of Money.
Russian translation implemented.
German translation implemented (some parts are missing still).
Other translations minor fixes.

Minor fixes:
Retirement funding is now calculated properly.
Road construction bugs fixed: Roads could be built through blocks. Roads could be on uneven blocks.
Camera movement still when inputting city name.
Fix for dissolve shader when close to buildings and blocks.
Fix for cost information not updating when in paused mode.

The vactrains have gotten a minor face lift: 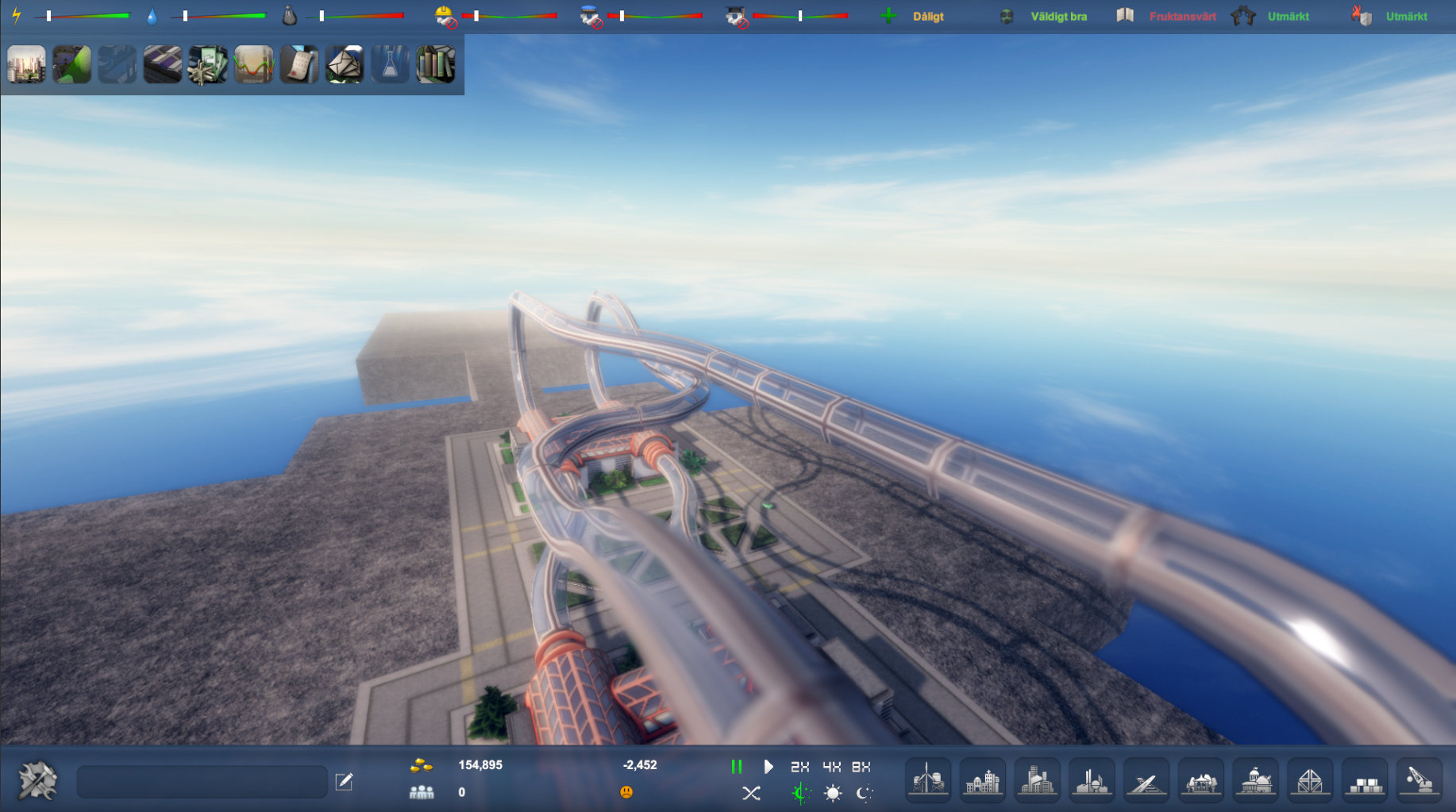 I am almost done with everything vactrain related. What remains (still) are the trains. These should be finished next week.

I've started tweaking building outputs even more, to ensure that output makes sense. For example, absorbents have not been outputting enough water, so this has been changed a bit. Health yields from clinics and hospitals has been increased as well. This means that it will be easier to keep health levels up, but clinics are still necessary to keep residents happy. 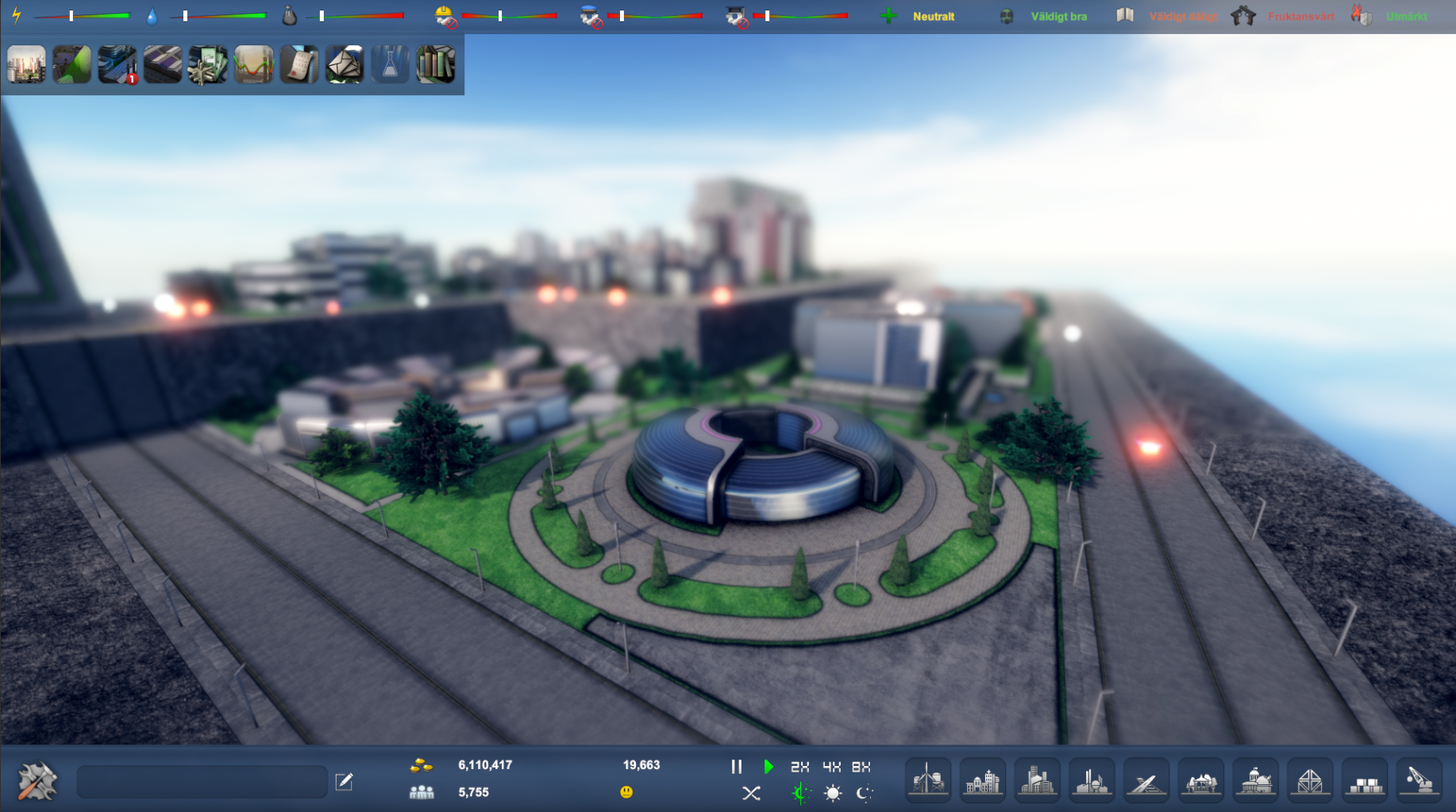 There's also been a great deal of work put into shaders in terms of performance and look. Things overall should be a bit shinier now, but more importantly culling objects when they are far away works better now.
The number of shadow casters has been lowered and poly counts have been lowered for some of the more common props, like trees and cars.
Another performance improvement is the way road (and now also vactrain) networks are calculated. This runs on a thread, so it hasn't been too important to keep it performant. But it has been pushing what is acceptable in terms of poorly performing code so I opted to make some improvements. This should come in handy when people start building huge cities. I've also moved this away from being calculated every time step in the game and instead only when a road or vactrain network has actually been changed. 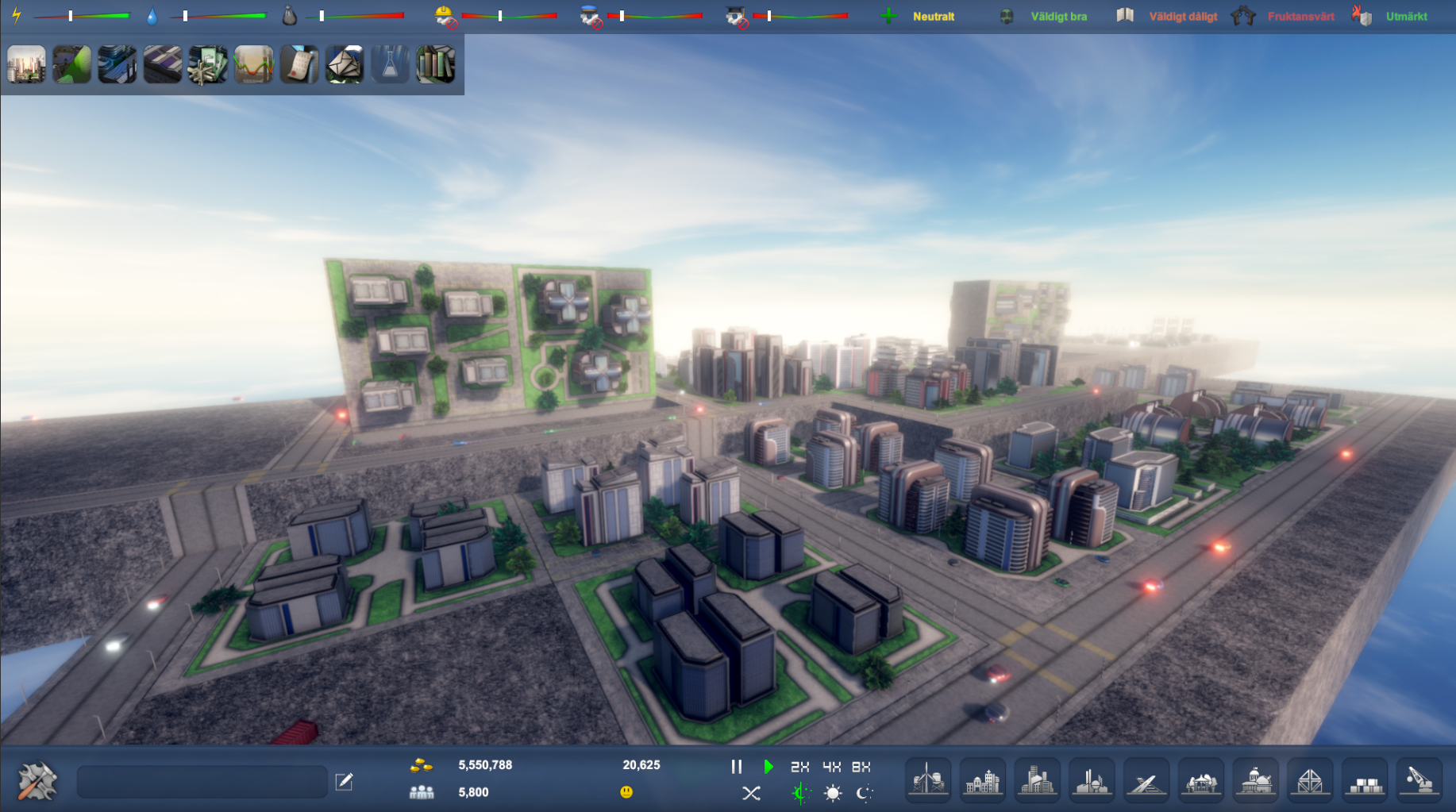 Policy keeps getting minor adjustments. I want policy decisions to matter, while also being costly. So the effects need to be tweaked. It's also important that not all policy can be implemented at once, but rather implemented as the city grows larger and can afford it. 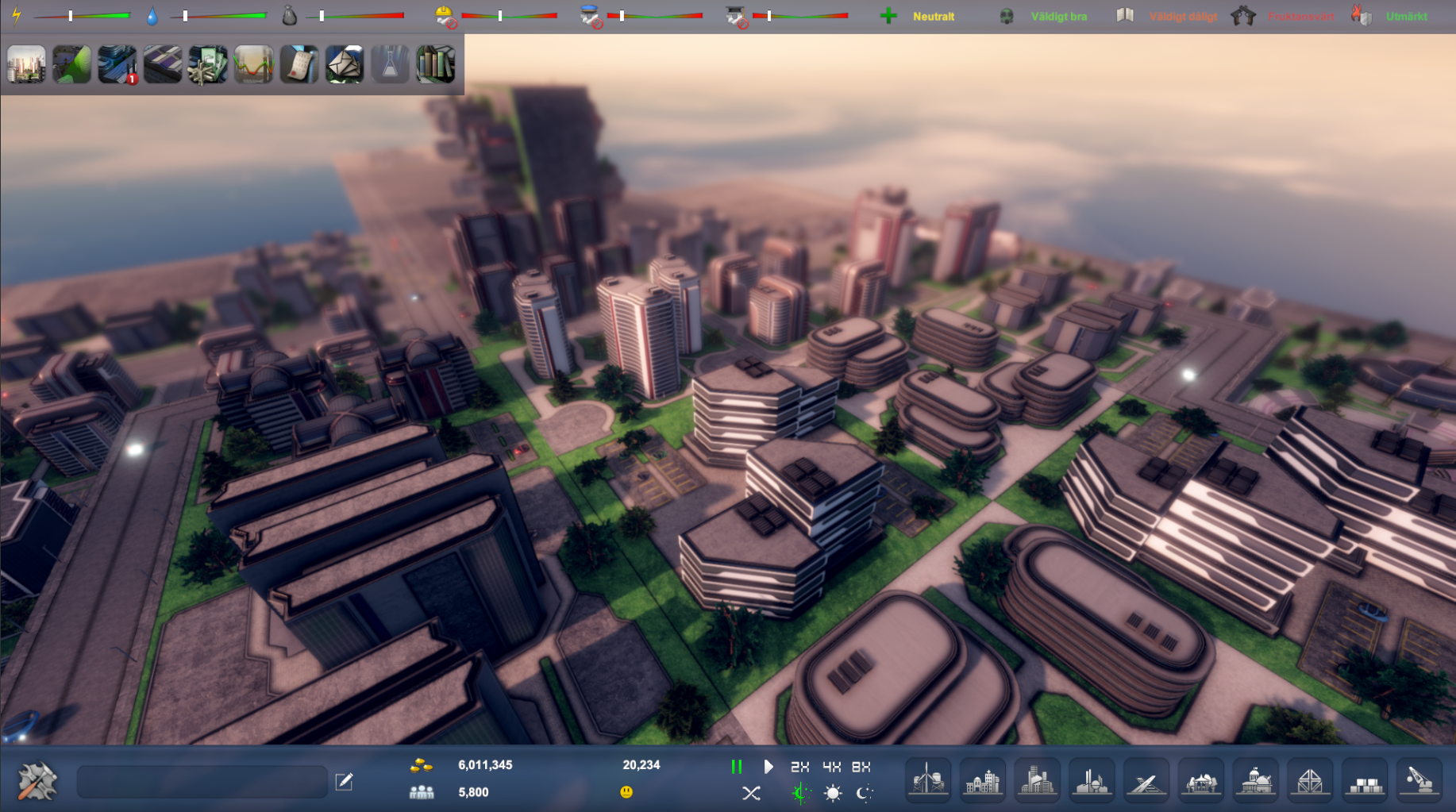 I'm closing in on finishing up localisations. Russian, Spanish and Swedish are more or less completed. French and German have a handful of elements missing. The Russian localisation required a bit of extra work due to the sizing of text elements being larger. This has largely been fixed, but a bug where the local economy panel isn't adjusted correctly slipped into the build (whoops!).

I've also decided to change the road check for each building from a sphere to a box. This allows buildings to be placed in corners as pictured below. This means that denser neighborhoods can be built and the need for roads is lowered a bit. 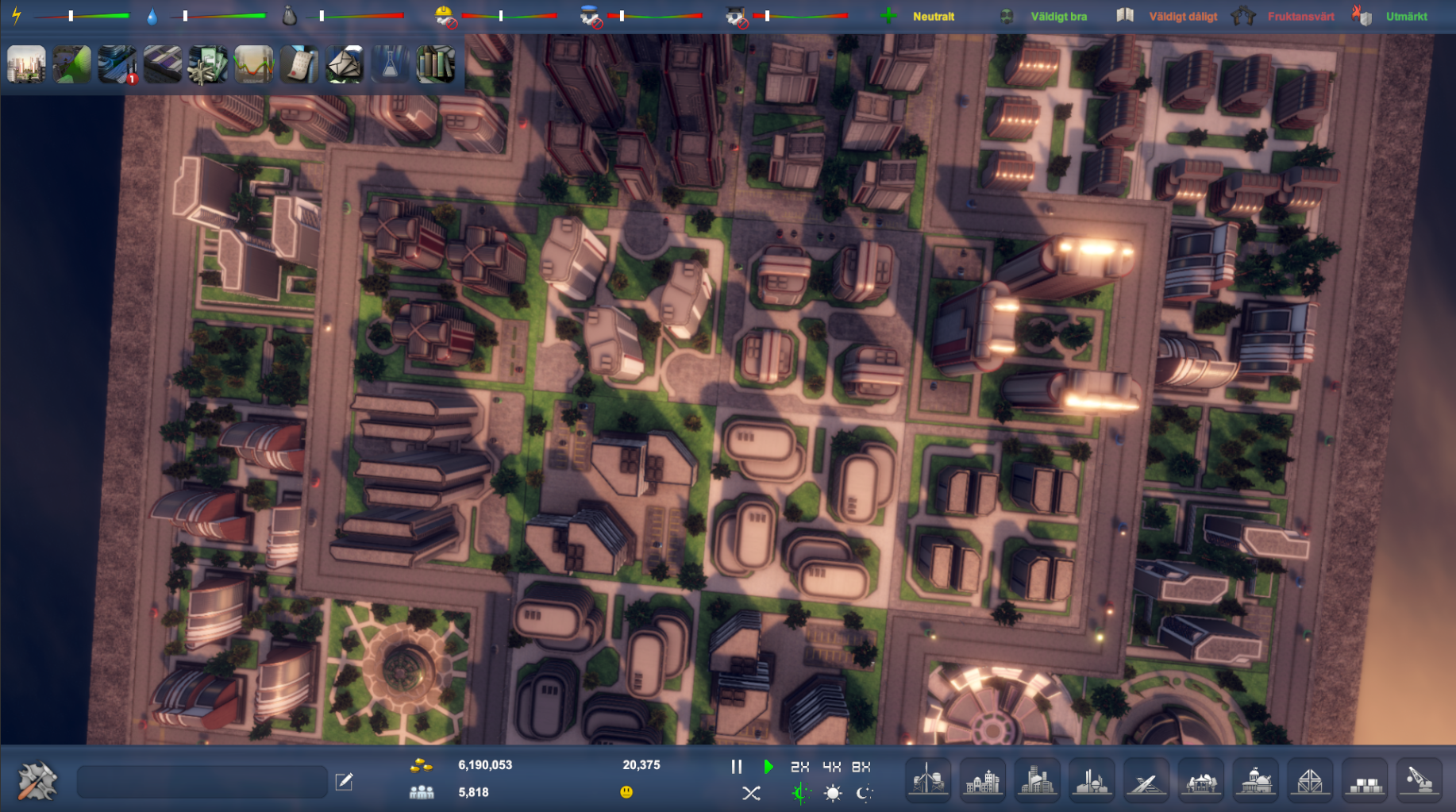 Next week, I mentioned vactrains will be finished up. The atmoport building and hopefully also function is on the schedule. Hopefully there will be time to start working on the objective system for the campaign as well. Should I finish those things, only one urgent things remains for the early access release of the game - the retro mode.

Thanks! :D It's getting there finally. :D