Hello!
This week I'm updating the Steam beta builds to version 0.46 which adds/changes/fixes the following:

This versions breaks old save files, the old files can still be accessed in game, but will load a corrupt city. Old save files can be removed.

New features:
- Connectivity between sections of the city now implemented. More work and tweaking will follow.
- Additional taxes. The code behind the system has been revamped as well, to allow for quicker implementation. This breaks old saves!
- Commercial tier fully implemented. Like the residential tier, demands are not final, as some buildings are still missing.
- Mid tier industry added. Demands are not finalized.
- High tech tier of idustry added. Demands are not finalized.
- Road size, road system and traffic system revamped. This breaks old saves!
- New traffic system. The old system used raycasting and was not scalable. This was mainly a for-show system. The new system uses threading and allows traffic to be scaled up. It also improves the connectivity system in that they can share information. Movement is a bit more floaty, which will adjusted in iterations.
- Decoration tiles - a first decoration tile has been added.

Other changes:
- Demolition indicator. Will be tweaked further later on.
- Reintroduced constraint for size of foundation volumes that can be built in one process (much larger than before). This is to avoid accidentally placing large volumes when raycasting against nothing.
- Building vicinity check now disregards buildings on the opposite side of a block, allowing you to better plan cities.
- Added range display for building vicinity check.

Possible fix:
- Issue with hologram shader on Linux. Shader has been replaced.
- Post processing stack has been updated, which might fix a performance issue on Linux.

Known issues:
- Certain aspects of the Spanish localization missing (because of new text items).
- Worldsize of templates not variable. As such, it is not possible to build to the full size of the current templates. This will be fixed in the next update.
- Performance issue when starting threads for calculations and connectivity.

The new traffic system is performing as well as expected! It does need the addition of culling cars that are far away and don't need to have their positions updated, but all in all it's working quite well. Aside from a few visual tweaks, it is more or less finalized. There will be a handful of more vehicles though, later on.
Following the traffic system overhaul, I have now also changed the road tile size and changed the overall grid in the game. Buildings now make up 4x4 of the grid, and roads are 1x1. Essentially roads are now 1/4 the size they used to be. This makes cities look denser and also allows for more interesting city layouts. 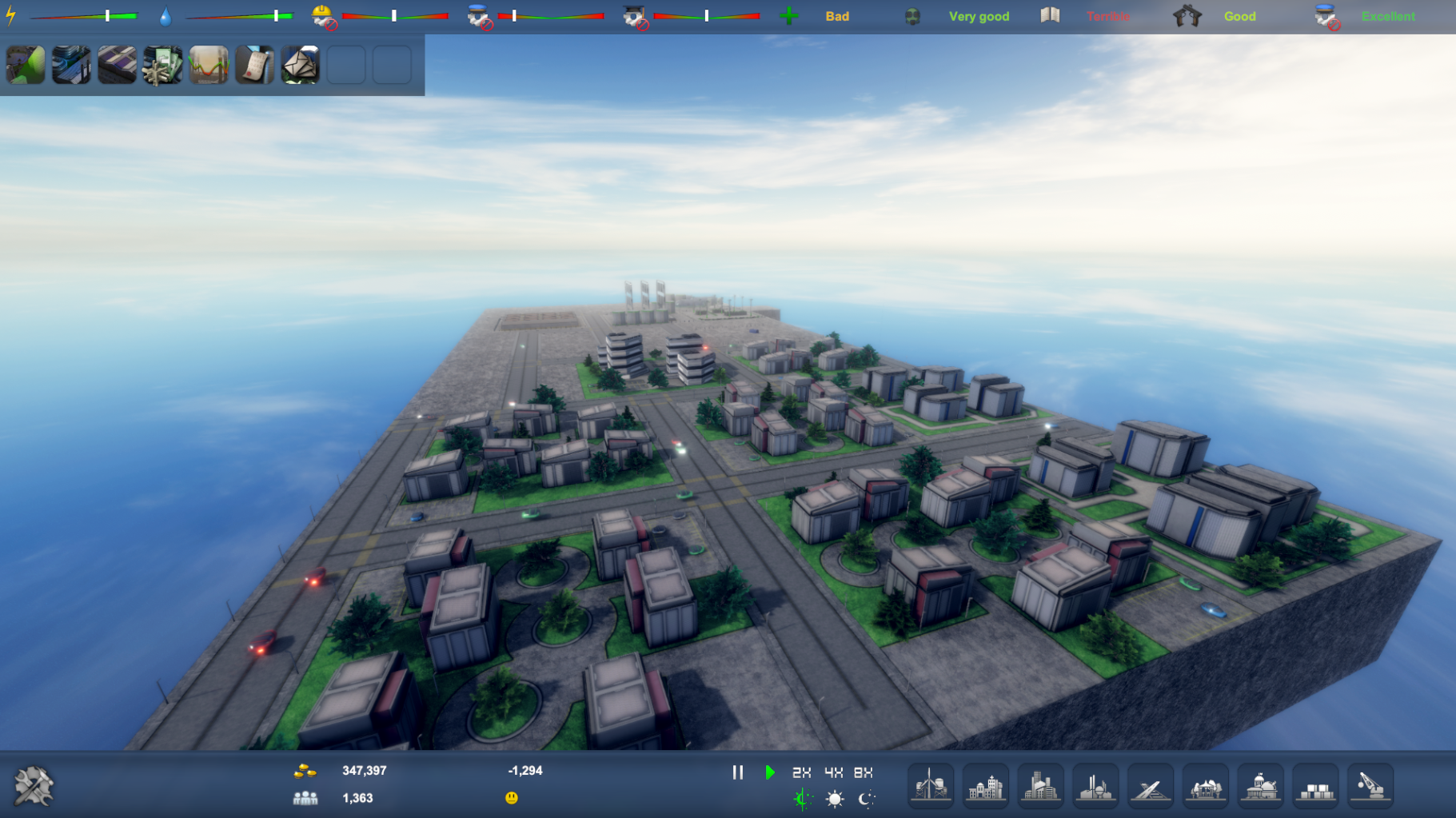 With the smaller grid size, I've also started implementing decoration tiles. These have no function for the city, but is also a way for plaers to customize their cities. 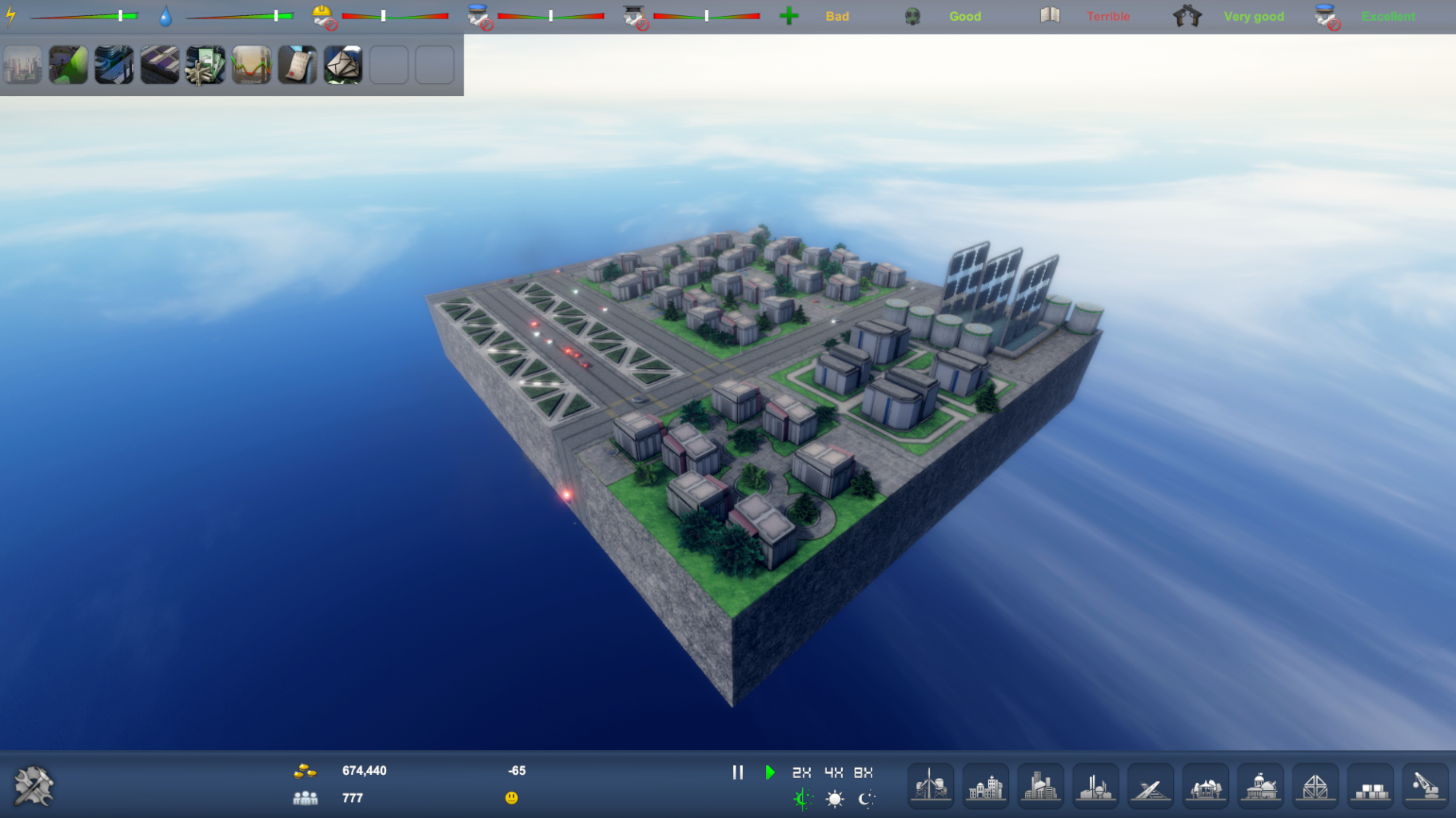 The policy window has been getting some work. Although a lot of work remains both in terms of layout and adding more policy to adjust, it is getting closer to its final layout. Implementing policy moving forward, should be much faster given that I've overhauled the code behind the policy system. I'm hoping to get quite a lot of policy and funding options added in before the next update.
Here's the budget panel: 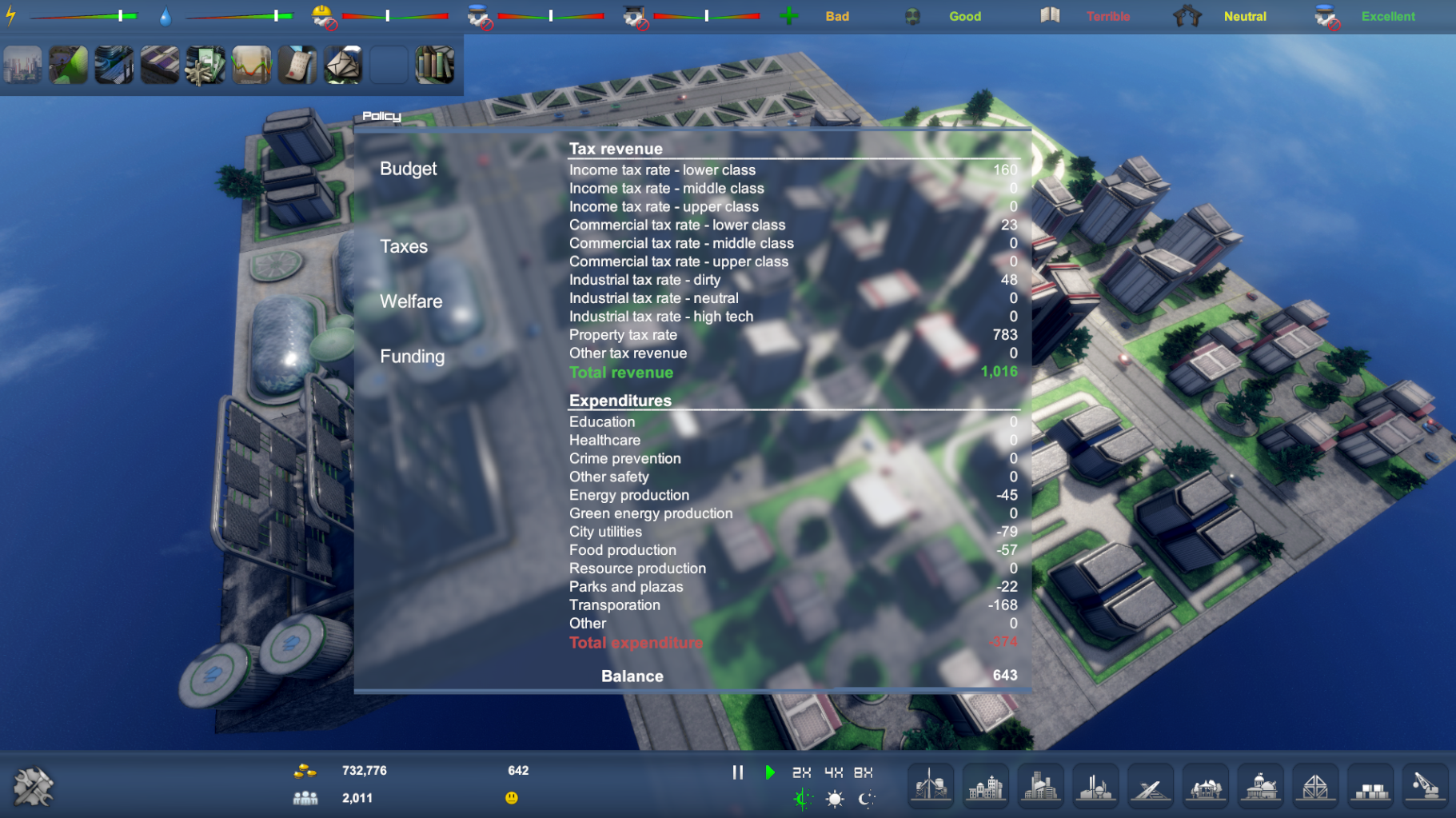 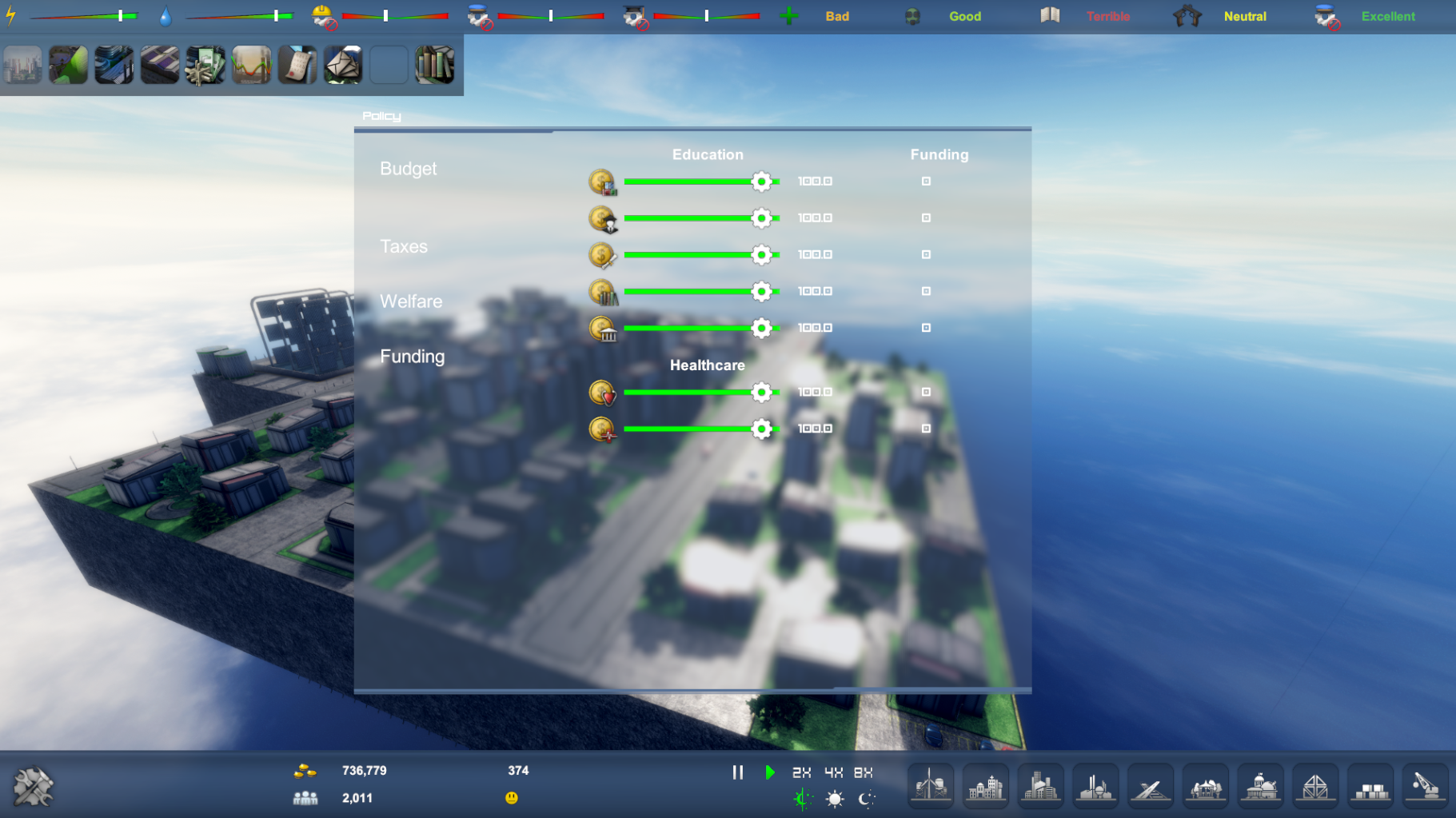 The vicinity system that checks whether a building is within range from a good or bad building has been changed to allow, for example factories, to be built on the back of blocks without negatively affecting buildings. This way, players will be able to build denser cities nd also plan their districts in a different way. 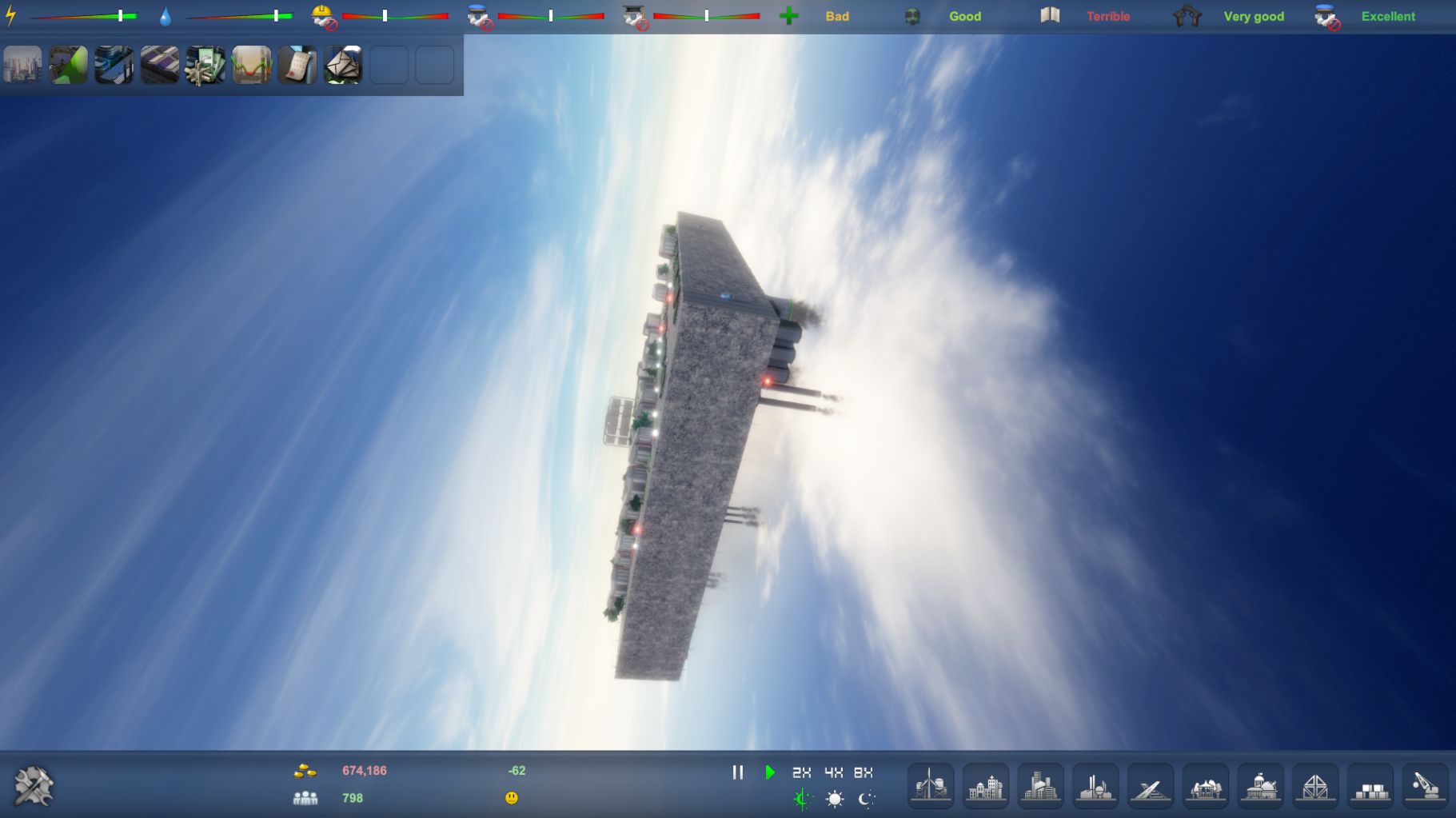 A first iteration of the econopedia has also been implemented!
Unfortunatly I've missed the target of improving on sounds and implementing the localizations, but I am otherwise ahead of Schedule. Localizations are quite simple to implement, so once I get the French, German and Russian ones they will be added fairly quickly. I had also planned on adding music for this build, but music is a bit behind schedule but has been coming along really greatly recently and there should be some tracks added for the next build. 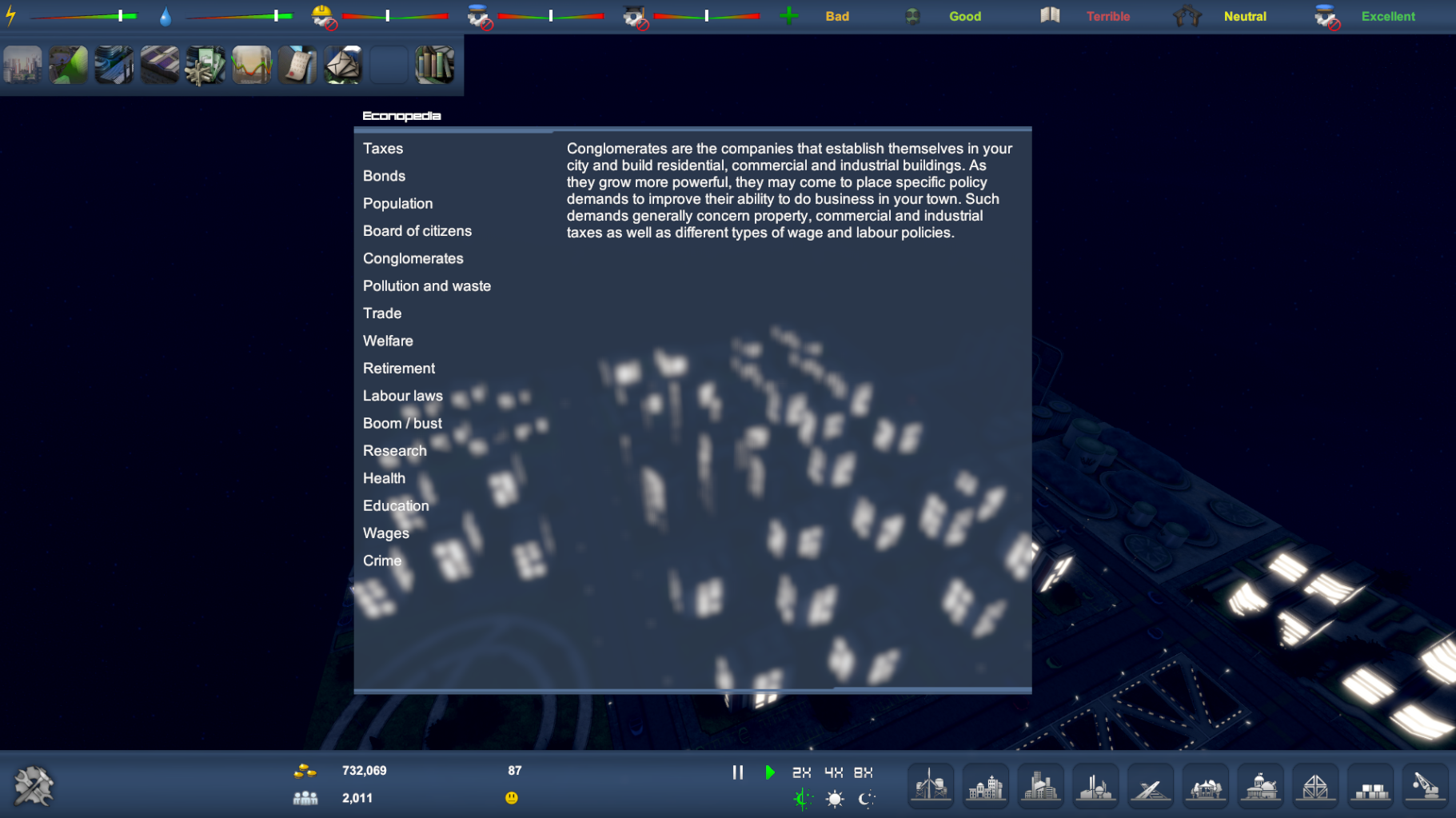