Given christmas was this week, I've only had a few days to work on the game. But the game did you out to a handful of testers on tuesday, and so with the response given, I've been able to make some improvements to the game and fix a handful of bugs. So moving forward, each update will include a changelog. This week's changelog:

New features:
Autosaving implemented. Can be toggled in options.
Resolution scaling implemented into options menu.
Cars optimized to not run when off screen.
Early implementation of offers/demands/bribes from conglomerates. Currently conglomerates will only issue offers. Unlike demands and bribes, these can be declined without any negative effects. Accepting an offer improves the happiness of the conglomerate. Offers will be made if there are more than 3 active conglomerates in the city, if you are short on a specific resource, or if you have an abundance of a specific resource.
Added unemployment insurance and health insurance welfare systems to policy panel.
Added tax for pollution, which affects industrial output for goods, labour requirements and pollution levels.
Note: Save files drastically altered. This means old files are no longer viable. Start a new city!

Glitches/Bugs fixed:
Cars looping around themselves and going into roads fixed.
Sound for construction is no longer overlapped when building concrete foundation or roads.
Correct text for concrete foundation now set in the cost display window.
Issue where concrete foundations wouldn’t be built if assigning to a large area fixed.
Wood processing plant now has to correct size (was scaled 1.5x for some reason).
Issue where image in the options menu would go full white fixed.
Construction guide for buildings, concrete blocks and roads now closes properly.
Commision rates when buying/selling resources were incorrectly calculated.
Save/Load menu would display all but one cityfile, fixed.

Other Changes:
Wood processing plant moved from category ”other pollutant” to ”other neutral” and can now be placed next to farms, absorbents and forestrys (etc.).
More tree variants added.
Linux version added, possibly unstable/broken.
Daytime post exposure scaled back.
New issues/Known issues (an outtake):
Sun is vaguely visible through concrete foundations.
Possible math bug when calculating happiness level, if you receive massive values all over the place – save the city into a new file and send this over for debug.
Offers are currently not saved.
Density shader still glitched.

One move toward making conglomerates more visible in the city, is adding their names to the owner display mode: 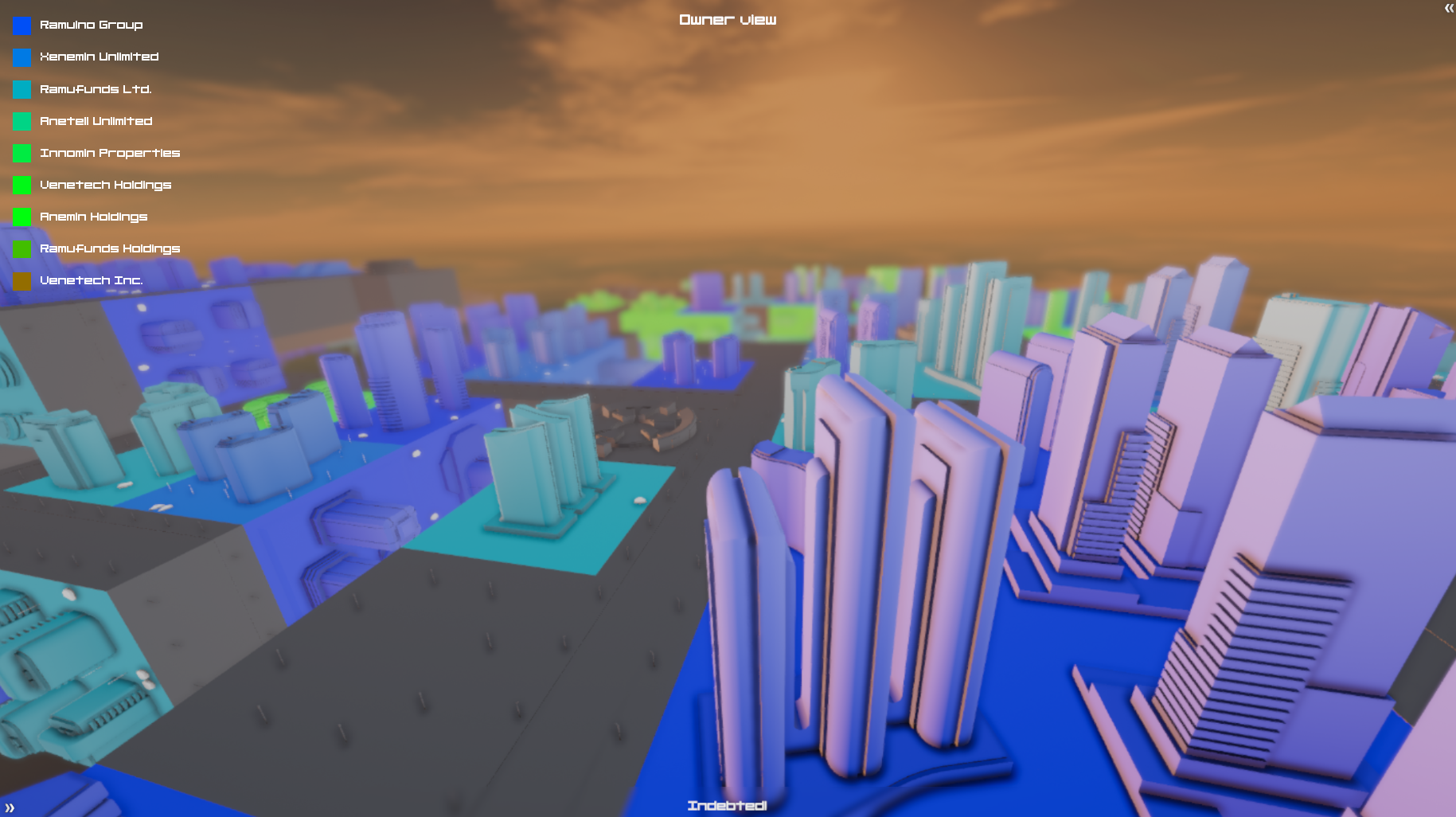 Of course, once the local economy panel is ready, they will be much more visible, since you'll be able to check out stats like company value, number of buildings owned along with their moods etc.

Another change this week has been the addition of a message system: 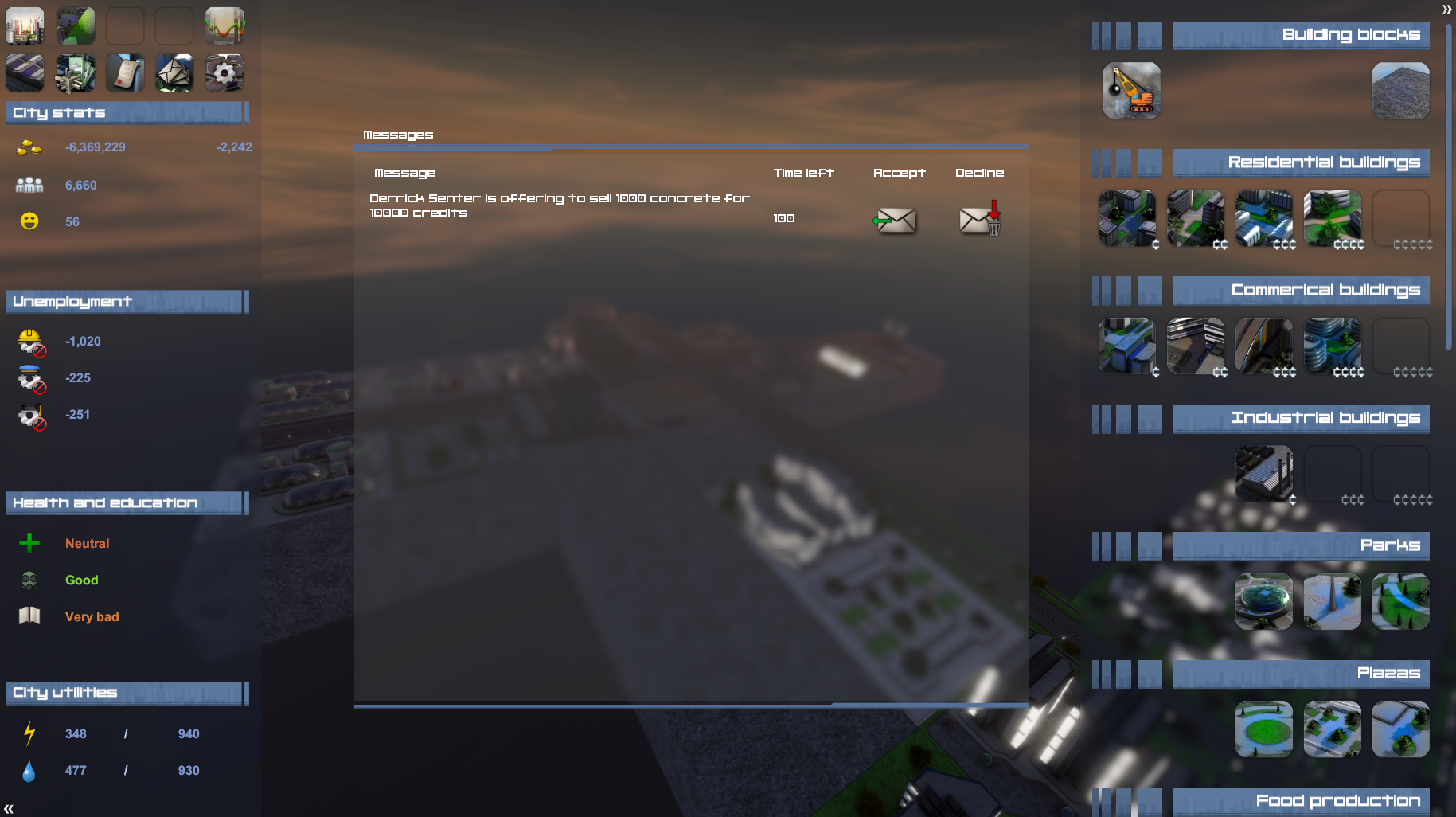 From time to time, conglomerates will make offers, demands or attempt to bribe you. Currently only offers have been implemented. Offers are only made by conglomerates that like you and aim to help you, either by selling you resources you're lacking to a slight discount, or by offering to buy large amounts of resources from you at a favorable bulk price. Declining an offer comes with no downsides, but accepting them further boosts the conglomerates happiness.
Next up, the demand system will be fully implemented. Demands will generally be made by conglomerates that are unhappy. Demands generally concern unfavorable policies like minimum wages and property taxes. Accepting demands will boost their happiness (and lower the risk of future demands), while declining a demand can come with a limited time stunted production rate or slower growth rate.
Last part of the message system is for bribes. Conglomerates will offer to pay you hefty sums of credits to change a policy. Declining a bribe doesn't come with any negative setbacks, while accepting one runs you a small risk of capture which will lower citizen happiness for a period of time.

The bug where cars would loop around themselves, get stuck or run into streets has been fixed. Along with this fix I've also coded cars to not run when not visible. If they remain outside of the camera frustum för an extended period of time, they will instead respawn at their "home position". That way the traffic system will be less performance heavy, while still adding some visual flare. 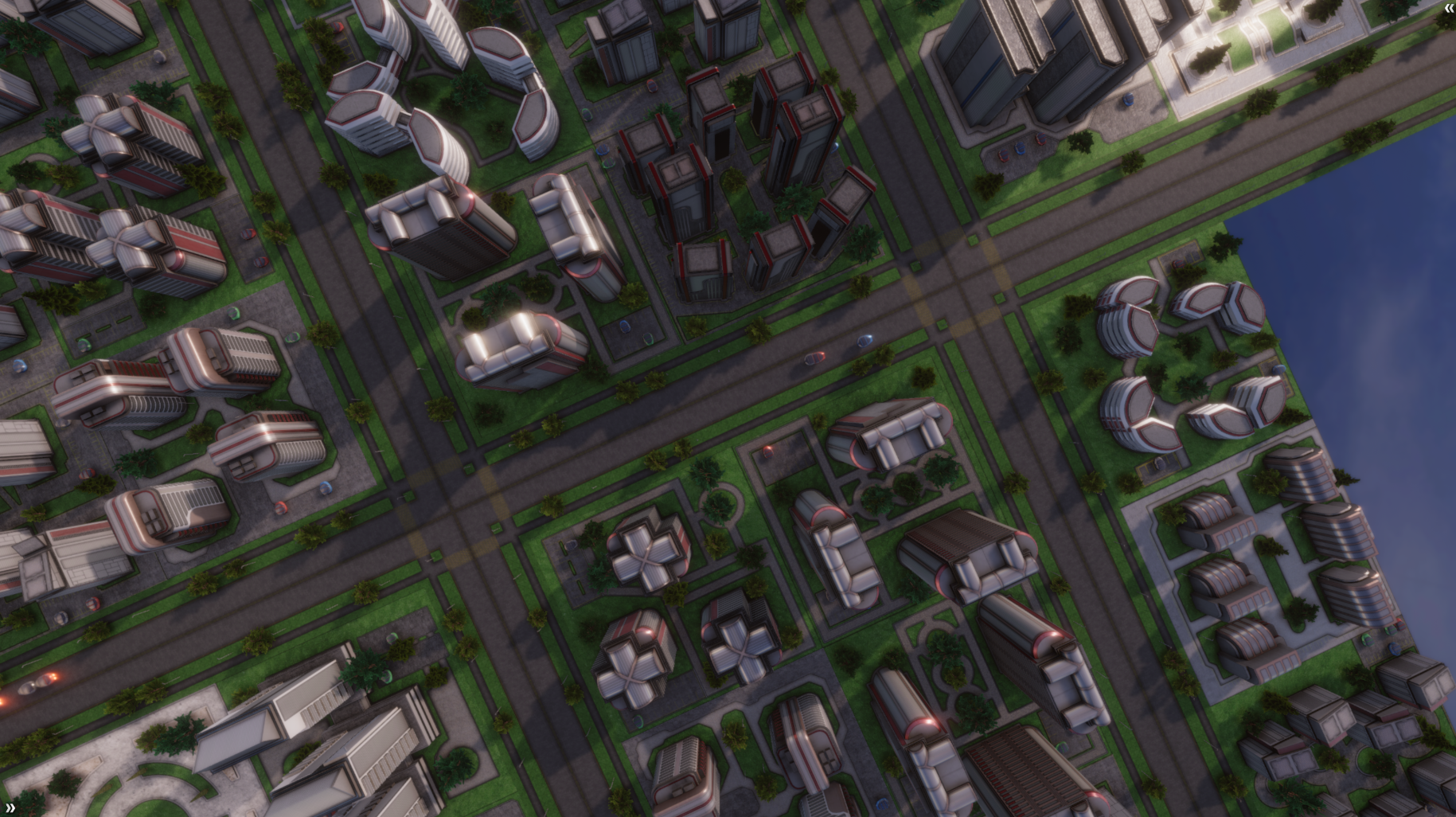 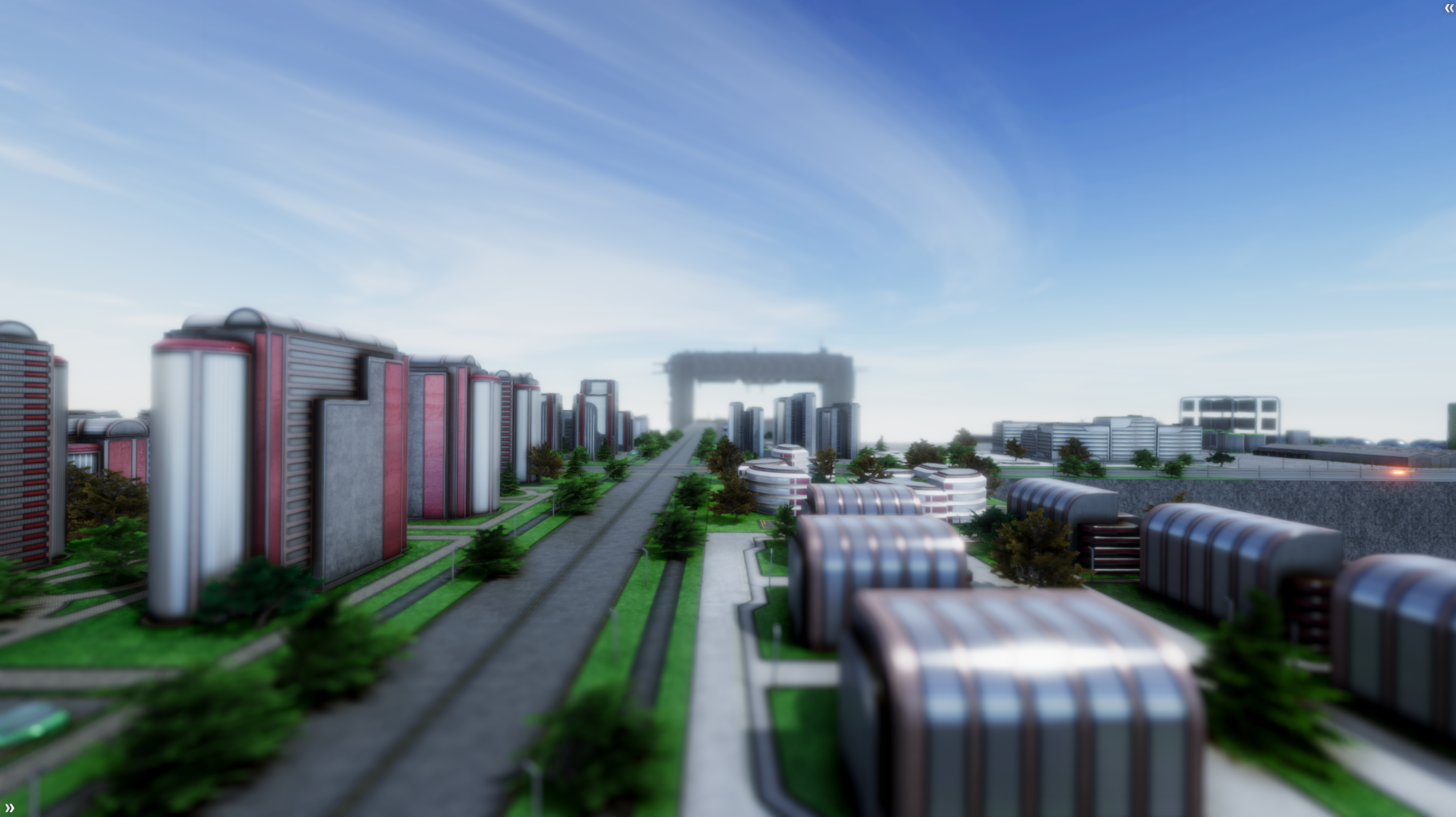 Another issue has been that nights and shaded areas have been too dark, which has made construction and navigation during night time more difficult. This has also been tweaked, and is hopefully more managable now: 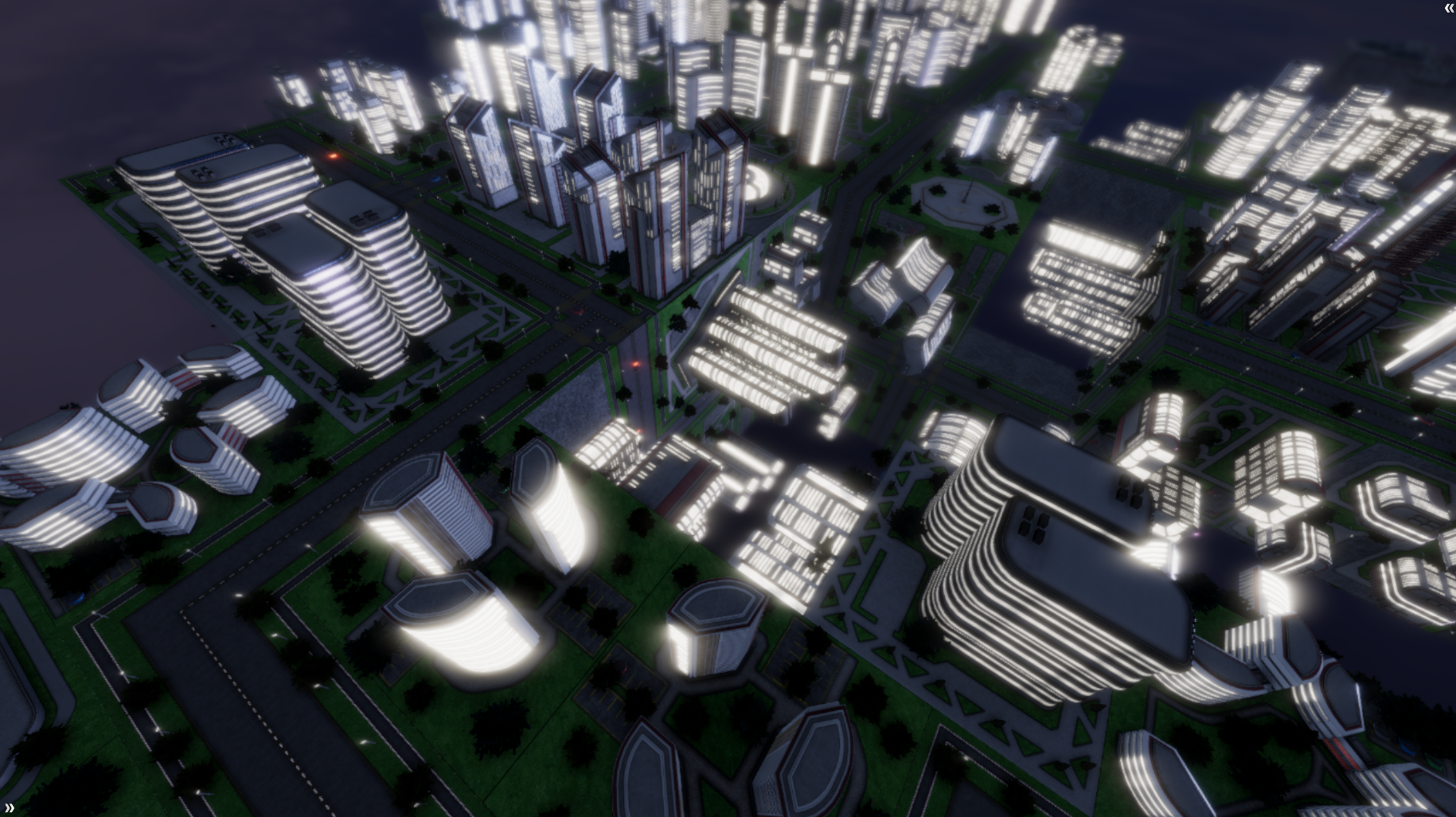 Moving forward I will put more effort into finishing the remaining buildings. Upper class residential and commercial tiers are my main focus. On the systems end of things, demands and bribes will be implemented in the upcoming week along with the local economy panel, including an early iteration of the budget panel.