Brand new idle simulation game out now. Start from nothing, choose your role as Support, Jungler, ADC, Mid or Toplane. Become manager and build your team piece by piece, and reach for the big leagues.

Posted by RaptorClawGames on Sep 8th, 2015

RaptorClawGames in cooperation with Millenway Studios proudly presents this simulation management game.
It is available now at our website and early access is coming to Steam when its greenlit.

"ProGamerManager is an interesting take on the standard manager game genre. The title puts you in the shoes of a randomly generated youngster who’s dream is to compete professionally on his favourite game; FOBA. As an player you begin from the roots as a new player and begin building yourself up from an amateur to founding your own eSports organisation." - review at Ninetyvi.com 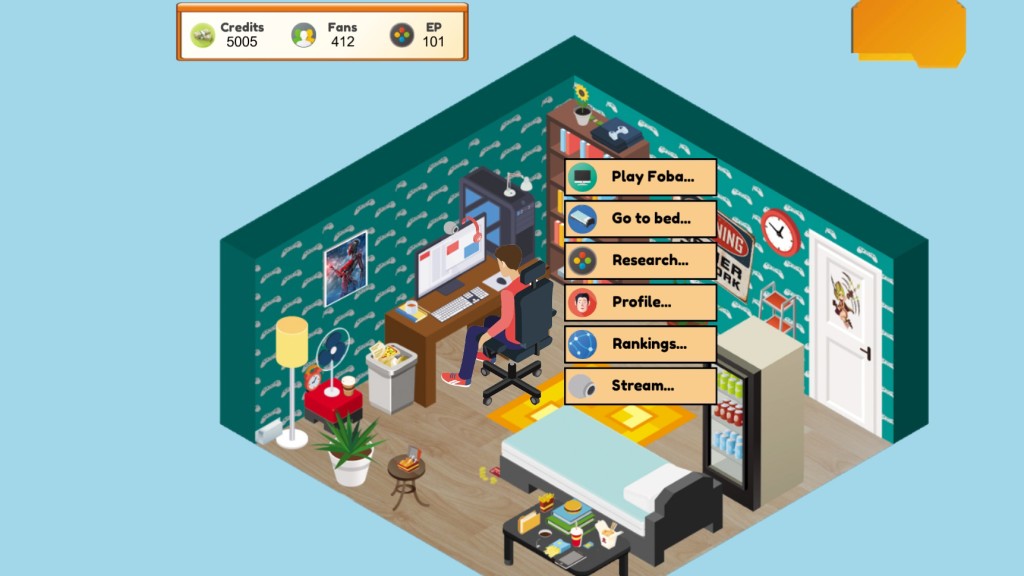 Build and manage your own progaming team
Work your way up as an amateur gamer to founding an professional esport organisation from scratch. Build your team piece by piece, and reach for the big leagues.

Become the leader of an esport organisation and gain worldwide fans. It's your choice, but in the end only one thing matters: Carry hard or get rekt both in term of recruitment, staff management, finances, contracts and sponsors, training programs, leave nothing to chance. You are in the hot-seat, where every decision will be crucial in your bid for victory!

Build your own career
Start from nothing, choose your role as Support, Jungler, ADC, Mid or Toplane. Shape your own playstyle. Choose between hundreds of different ways to improve. Keep that KDA as high as possible. Become an international star.

Build your team
Once you proven yourself you can move into larger gaming facilties, recruit a team and train them and unlock new options as you progress. Shape the future for your own esport team.

Aim for the big leagues
Gain cash and fans to unlock upgrades and opportunitys. Participate in a range of competitions ranging from Local Amateur Leagues to Pro Leagues.

Make hard choices
As your esport team grow more wealthy and prosperous you can use resources to improve your own skill or your teammates, can you carry hard enough or you want to depend others?

State of the Game At this point the game is playable and fairly stable. Many of our Alpha and Beta testers have hundreds of hours played so far. If you want to hop into the Beta, the game is available for purchase at Progamermanager.com

This game looked interesting enough so I bit the bullet. I played it for maybe 10-12 hours yesterday and my conclusion so far is that its interesting, but needs a lot of work.

Putting all of the minor problems aside (typos, silly bugs, stuff like that) the game has some major flaws right now. So you start up the game and you control 'you', a new player to a new MOBA. You choose his position, what characters he likes wants to learn, if he counter picks or troll picks, stuff like that. During the match you are presented with some options that set them self up as a major critical point. For example: You realize someone in the jungle is invading, do you group up and stop him? You are given yes or no, and then the simulation continues. The problem is that there is no feedback. What happened after I tried to hunt him down? What happens if I don't? As it stands now it seems like its just a time sink as I don't get to see how my decision effected the outcome of the game.

Once you progress into the team phase, where you run an esports team, and you hire players to fill your team. The problem I have with this is that 1) the decision making mechanic in the first phase of the game goes away completely 2) there is no way to see how people on the team are actually performing 3) There is no way to see better or worse your team does when you switch out a tactic, playstyle, training schedule, etc. 4) view your team memebers stat progress. Maybe there is a way to do this or some of these things, but if there is I haven't been able to figure it out yet.

I know this is early access or whatever, but I just wanted to let people know how I felt about the game. EVEN THOUGH THIS GAME HAS PROBLEMS IT IS STILL NEAT AND FUN. I am excited for these features to get fleshed out and for multiplayer to be added.


Best of luck with development!