About 1.5 weeks ago (4/18/19) we release Privateers into Early Access on steam after 4 years of development. I has been a great experience, so I thought I would take some time to write up how everything has gone and share it out.

About 1.5 weeks ago (4/18/19) we release Privateers into Early Access on steam after 4 years of development. I has been a great experience, so I thought I would take some time to write up how everything has gone and share it out. Hopefully there is some learning or experience in this that could be useful to other first time steam publishers.

If you haven't been following along with Privateers at all, then I think this review gives a better description that I can in a few words...

Or, you can check out the gameplay trailer below or the steam page here.

This is our first time publishing a game on steam. However, I have published several games before on mobile and console platforms. As a result, I have long ago realized that I will never make very much money doing indie game development. Instead, it is a passion to be perused for fun. With this in mind, our main goal of early access release was to find as many players as possible who would enjoy our game and give us feedback. Thus, we came up with the following release plan...

Based on all of this action, we ended up with the following results in steam...

Reading the graph is a bit cryptic, but from a high level this is how you can read it..

Based on this, there are a couple of interesting things that stand out. The first is that when we release the game on the 18th our efforts from our release plan do drive thousands of views to our store page. However, around the 22nd steam started showing Privateers in peoples discovery queues and this had a dramatically larger impact. Steams exposure of Privateers has now come down, but it still has a steady rate of impressions which we hope will keep up.

We can then dig deeper to see which of our efforts had the most impact. Steam gives us the following chart to help understand where external traffic came from...

Based on what we can tell from this, Reddit was the most successful way to drive traffic to our page and Twitter was a distant second. Bear in mind that we did spend ~$100 advertising on twitter as well. We got about 15k impressions on twitter for that money but that didn't attribute to very many clicks to our store page.

Another amazing part of our release was that Kurt (Designer / Artist) was able to arrange to have Team SKYju do a round of release streams for us on Twitch. They did a couple of streams every day leading up to the release and over the following weekend. The metrics don't show that this had a huge impact on visits to our page. However, it was by far the most fun part of releasing the game. It can't be underestimated how much energy it brought to our team to jump into the streams and see people enjoying playing and watching the game. I would highly recommend people to try and find a great streaming team like this when they release. You should follow Team SKYju streamers on twitter because they show off really great indie games regularly...

We also have Unity Analytics setup for Privateers and the below graph shows the player base growth since launch. This shows that we have grown to 100 MAU with 10-15 DAU which is really exciting for us. We are really anxious to get player feedback and continue to learn and evolve the game.

So, of course the burning question that people want to know is how were the sales. This is how we have fared so far... 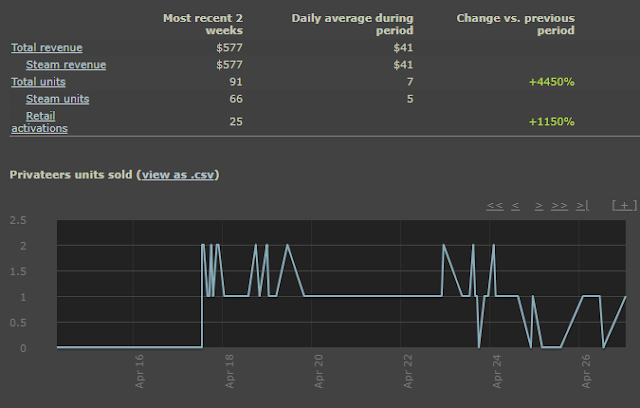 So far, we have sold 66 copies of the game and given away over 90 keys. It is a very modest start, but as stated before my expectations were very low and thus I am happy with this. The graph is hard to read because it doesn't snap to 0 between sales. However, one interesting trend is that there was a burst of sales before the 10% release discount expired, which makes sense. After that, sales have dropped significantly. The breakdown of how the sales map to geographies is below...

I was a little surprised to see how many sales we had outside of the US since the game is only localized in English. This is definitely an important thing to consider for small niche indie games. Beyond sales, and maybe even more important in early access, is how many wishlists you get. I was really happy that Privateers grew many hundreds of wishlists over the past week. It has gone from something like 200 to over 600 now which is great.

Overall it has been a really fun and exciting experience to finally show release Privateers to Steam. To summarize, here is a list of the learning we have taken away from this...

Thanks everyone for taking the time to read through this. I hope there was something interesting in it for you to learn. If you want to continue to follow us on our journey then pick up a copy (or wishlist) of privateers here! We will continue to share out our learning from early access and eventually a full release.