In which various minor tweaks are made to levels one and five; the examination of paint-flecks is removed; the examination of murals is added; a sound for an activating crystal is added; ledge-grabbing sounds are reworked; cutscenes are skippable by pressing near-any key twice; and some minor bug-fixes and changes are made.

This week's screenshot shows a mural in level one being now examinable: 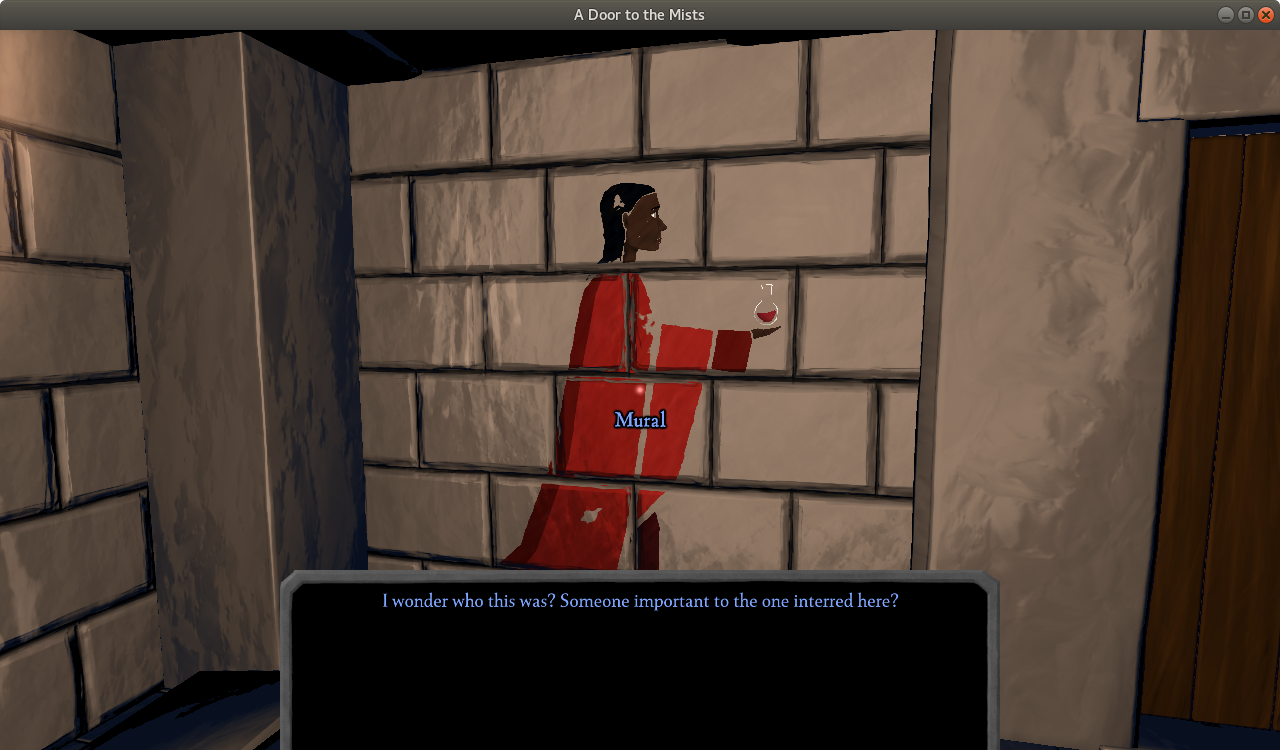 The week just past was primarily one of level-tweaking, audio-work, and one perhaps-notable change to the skipping of cutscenes:

To start with, I made a few fairly-small changes to level one (that is, the first level after the prologue), in response to feedback given regarding the demo.

Most of this was fairly minor: a response for using a particular item on a particular object; adjustments to the collision-boxes of the stone-panels and keyholes in the upper tombs; distinguishing the two wooden keys; and adding a new autosave point at the entrances to the "pit" area.

These murals are separated into two sets: those showing the general run of figures, and those showing one particular, prominent figure. The response to any mural within a given set is the same, but changes should the player examine more than one (barring some duplicates): Check just one mural in a set, and the base response is given; check another, elsewhere, and a new response is prompted.

On the audio side, I added a sound for the activation of the crystal light in level five. Some parts of the audio-work for this did prove tricky for me--in particular the production of a sort of metallic "crunching" sound, as of two pieces of ice ground together. Still, I think that I have something that works!

Sticking with audio, one piece of feedback that I had on the demo was the suggestion of adding sounds for the character catching onto a ledge. I thought that this seemed like a good idea, and seemed to recall that I'd previously attempted it, but had been dissatisfied with the results.

I was surprised, then, to go to my project and discover that such sounds were already present and being played!

I concluded, I think, that the sounds that I had were thus not sufficiently noticeable. And further, I wasn't all that enthused with them.

So I reworked them--both completely replacing the sounds themselves and making some tweaks to the code that controls them.

You should hear in the video below, then, the results:
(If you don't hear anything as of the first block climbed, perhaps turn up the volume--but then beware of the volume of the end-of-video music!)

On the technical side, I made a change to the manner of skipping cutscenes.

It had been pointed out to me that, while the space-bar and escape-key were perfectly fine keyboard-buttons for skipping, their corresponding gamepad-buttons were a little unexpected.

Furthermore, it was suggested to me that the potential issue of accidentally skipping due to a belated press of an in-game control could perhaps be dealt with by requiring a second press to confirm the skip.

And so, in the week just past I implemented cutscene-skipping by the pressing of (nearly) any button, but twice.

In short, if during a cutscene the player presses a button, a timer is begun. If they press the same button again within that timer, the cutscene is skipped; if they press another button, the timer is reset with that new button as the potential "skip" button; and if they do nothing, the timer runs out and the state of the system is reset.

This comes with a simple prompt that pops up on the first press of a given button, and that fades away if the timer is allowed to run past a certain threshold.

You should see a brief demonstration of the system below (cropped for focus): In this, I believe, I press the space-bar, wait for the timer to run out, and then press the left mouse-button twice. That second press of the mouse-button then skips the cutscene, thus producing the loading screen.

And finally, I also implemented a few minor changes and (I hope!) bug-fixes that don't seem worth detailing here, including the attending-to of some crashes related to quick-loading at certain points.