This version mostly contains GUI updates as well as a new storage system. 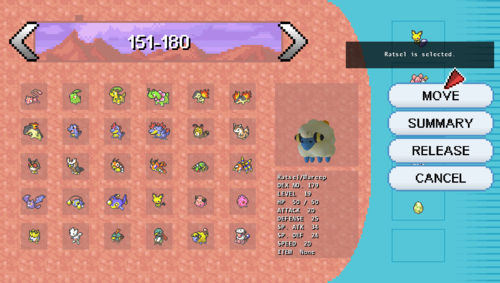 Pokémon3D version 0.39 comes with mostly bug fixes and an all new storage system. There aren’t too many new features since I was focusing on improving the GUI system for keyboard and controllers.

But here is the changelog anyway:

The new version will be out in a few minutes, have fun with it.

I don't mean to bug, but as I stated in the last news article when you said you were adjusting things for X and Y, how big of changes were they? Just like Pokedex entries, or stats or something? though personally I would like to keep it as close to the original games as possible, not the remakes or new games. But obviously I have no say/control of you, its your game. just stating my opinion

Up top it says it has nothing to do with the old games, simply recreating the Jhoto region

actually in the way it is written that they have nothing to do with Nintendo/gamefreak.

as long as they animate lugia's aeroblast like in silver/gold / 2nd movie im happy XD. but yeah i like more how things in the first 2 generations=) some improvements have been made though since... and i have confidence it will be awesome however nilllzz makes it.