AI (artificial intelligence) has been our main focus of the week. Bot games will be really tough in the future! Read all about it in this devLog!

Hello everyone,another short update about the progress of the last week.

More work was done to complete a few of the missing abilities. There are only very few left which we first need to come up with before they can be implemented into the game. In the next week we will try to complete this task so we can move on with other open steps to complete the game.

Here are a few examples for three of our Ploxmons cards who got new abilities. 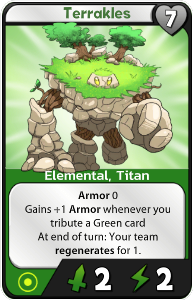 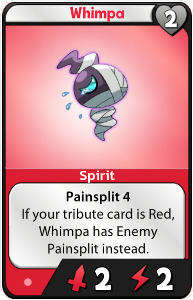 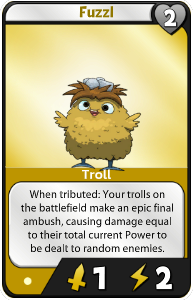 We'll test playtest all the new stuff of course. So expect some balance changes until release. When all abilities are done, we'll update you and show all the cards, bosses and ploxpowers with their final abilities and stats that are likely to be kept until release.

AI (artificial intelligence) has been my main focus of the week. When you play a game vs the bot you will face the AI that tries to win the game against you with a random or semi-random deck and ploxpower. This AI (I call it the StupidAI) is currently pretty simple and limited when it comes to making good decisions. For newcomers or a relaxed Ploxmons experience this is pretty fine since it leaves some room for mistakes, experiments (new decks) or just bad rng. However for experienced players this AI is hardly a challenge and can be beaten in most of the times without to much effort.

For a long time improving the AI was one of my wishes and plans for the future.This week I looked into the current AI implementation and added a completely new AI with highly improved abilities ~ the SmartAI.

...works on a very complex and computation intensive algorithm that always tries to find its best possible turn.To achieve this the AI will calculate all possible outcomes from the current game state depending on its cards to play. Every outcome will be weighted depending on different factors (for example: How fast can I win?, Is there a chance my enemy will win?, ...). After all outcomes are calculated the AI will choose the one with the highest rating ~ the best possible turn. This understanding of the best turn highly depends on the different rating factors and can be summed up with: "Find the turn that gives me the highest chance to win and the lowest chance to win for the enemy".

To reduce the computation load for the server when calculating the AI decisions I've spend a lot of time this week to further optimize and simplify the algorithm.Additionally I have experimented a lot with different variations of the rating factors to get the best AI behaviour out of it. Overall I am pretty satisfied with the current version of the SmartAI and will keep an eye on it how it behaves in more human vs SmartAI test games.

Our latest test games vs this AI were, well, let's say more difficult than usual ;)

AI depending on game mode & rank

Additionally you will face the StupidAI in low elo ranked games to make climbing in lower rankings a little bit easier.The SmartAI will be used for mid-high elo ranked games to offer a real challenge when climbing to the highest ranks. The higher the rating the more the SmartAI will be used making reaching the highest elo tiers a real achievement.

For all the ranked botgame players of you: Brace yourself, the SmartAI is coming for you! >:)

This is it for today's devlog. Thanks again for staying by. Stay safe and see you in the chat @ our discord!

Of course we also have an animation to show off ;)
Here is Champy, one of our blue Ploxmons:

Join our Discord and other channels!