We come here after some time of inactivity to present you with a progress report that is far beyond what we usually have to show, including sprites, a level layout in engine and plenty of programming news!

Posted by CreativeFlowGames on May 3rd, 2020

First off I'd like to apologize for our inactivity the past week. In the scramble to get things done, I'm afraid updating you all slipped our minds. We will endeavour to not let that happen again moving forward, but on the bright side we do have a lot of good news about this game!

For starters we bring you a sketch of the overall layout of the first level in the engine itself. This is the first time we give public visibility to the first level, though it was conceptualized rather early. It lacks the objects that it will have in game, and it might change here and there (the tiles are all work in progress for one) but for now we have this to give you a sense of what a level is like. 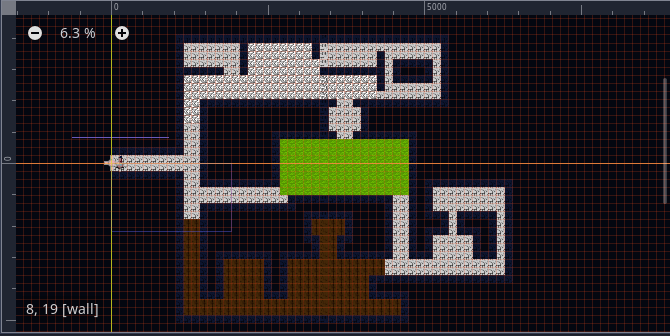 On the art front we have sprites to show, and a mockup to show our artstyle in action! First off we have the player character, the Shadeborn, followed by the rival looter enemies, who will gather treasure and attack you if you get too close. Fortunately, if you avoid their attacks they'll dash right past you and become unable to act for a moment. Play well and you'll be able to bait them into the line of sight of the armored skeletons, which will target them just as readily as they will you, as it is their job to protect the ruins you're looting. The armored skeletons can't see very far when the ruins are so dark, and that's why they depend on the wandering wisps to light up the ruins, allowing them to see intruders from farther. Light is a dangerous tool in any armor's arsenal!

After our lovely characters we have our mockup, which showcases a somewhat altered specific part of the level above!

Meanwhile, in terms of programming, we have our inventory system ready to go, with the player being able to hold two artifacts that grant them powers at once. One artifact is active, while the other can be swapped in at any time. Be quick about it and you'll be able to use two at the same time, though that'll be rather problematic for your Shade resource, which depletes whenever you use a power!

Not only that, but we have also implemented chests and loose treasure that will serve to increase your score, and our programmer is hard at work trying to implement our looter enemies!

That is about all we have to say for now, thank you for keeping up with our project, and I hope you will continue to do so as we progress further and further along development.