There are 3 different ships in this game. They differ not only in appearance, but also in shot types. Read more...

In order to make shooting more interesting to the player, I have decided to base mechanics of the game on 3 different ships, each with different shot types. If you have played (Do)DonPachi then you understand that it provides quite a bit of variety for a shmup.
Each ship has 5 fireing sources, and 3 always point forward. The other 2 are ship-specific:

Ship #1 is the plane F16 Falcon look-alike you can see in the videos in my previous news post. It has two circling alt fire hovers, that shoot forward, and rotate around the axis of the ship. This gives the player maximum power forward. 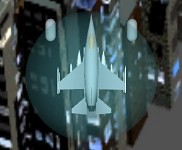 Ship #2 is a hovercraft-like bulky two-engine destroyer. The tricky part is it turns its shots to the side you are going to, meaning: if you turn left the fire position on the left turns left with you and allows for some damage to the side, and also some tactical options in avoiding enemy bullet patterns (more on that later). 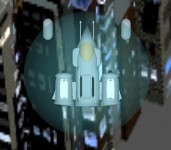 The #3 is a chooper-like vehicle that that fires simultaneously to both sides - giving maximum flexibility in avoiding enemy bullet patterns. 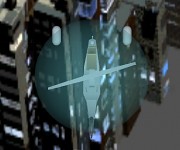 All ships can in addition, do "streaming". It means as you hold the fire button, the ship starts to fire a huge laser forwards, that slows you down a bit (tactical), and does more damage.