This week I got the physics beam working, among other things. It still needs a bit of work, but here's a vid.

Got the physics beam fully working this week. I know, its basically the physics tool from garry's mod. That's kind of the point. There are some visual artefacts in game, plus a couple in the video, but you'll get the picture.

Now the other thing I worked on this week is a method of generating icons for the various items in the game. I don't currently have an artist on the project and wanted to save myself the hassle of having to render items out in 3dsmax or whatever. So I wrote a bunch of Unity scripts that essentially take a selection in Unity and render icons out for whatever is in that selection. At some point I need to change this so that it only makes icons for the items in my item database, but for now it'll do the job. I then take these icons and pack them together into an atlas so that the GUI can render them quickly. These icons are used in the inventory and crafting systems, as well as the build menu interfaces, so it was getting annoying having to look at the black-and-white icons I'd downloaded from the web. 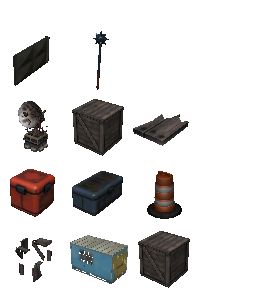 As you can see, doesn't produce the best icons in the world. But beggars can't be choosers and all that.

The physics tool is just one of the many tools you'll be able to use in the game. I think in order to speed up getting feedback, I'm going to work on the getting the game into a testable state this next few weeks. What that will mean is that I'll add in some small kind of tutorial system that guides you through some of the tool usage (maybe get you to pick something up with the physics tool and drop it into something else). Then I'll see if a web-player version will work properly. It might well be I have issues as I use Unity free for dev and then build with Unity pro using a work license to see what it'd look like. Not ideal, but it makes the transition to Unity from my own engine a bit more palatable.

I also need to clear up a bunch of state management around which weapons,cameras and UI's are active at any given point. Which means finally hooking up the quickbar so you can equip any tool. I'm still torn about the concept of having to equip items, because that suggests that items can be de-equipped and/or recycled. Imagine a player being able to un-equip the physics tool and then recycle that into raw metals? All that effort to make the damn thing work would be up in smoke. But such is the price of player freedom. Allowing you to destroy the very tools you might use to save yourself is a scary thought.

Anyway, thats it for now. See you next time!

I think the ideal model for this would be some type of glove/gauntlet thing. (I assume the pistol is placeholder?) Looks cool though!

I've been torn about the glove/gauntlet thing. I figured something like sanctums glove would work, combined with a pipboy style left arm. But then distinct "tools" would work too.