Posted by Godream_Interactive on Nov 24th, 2019 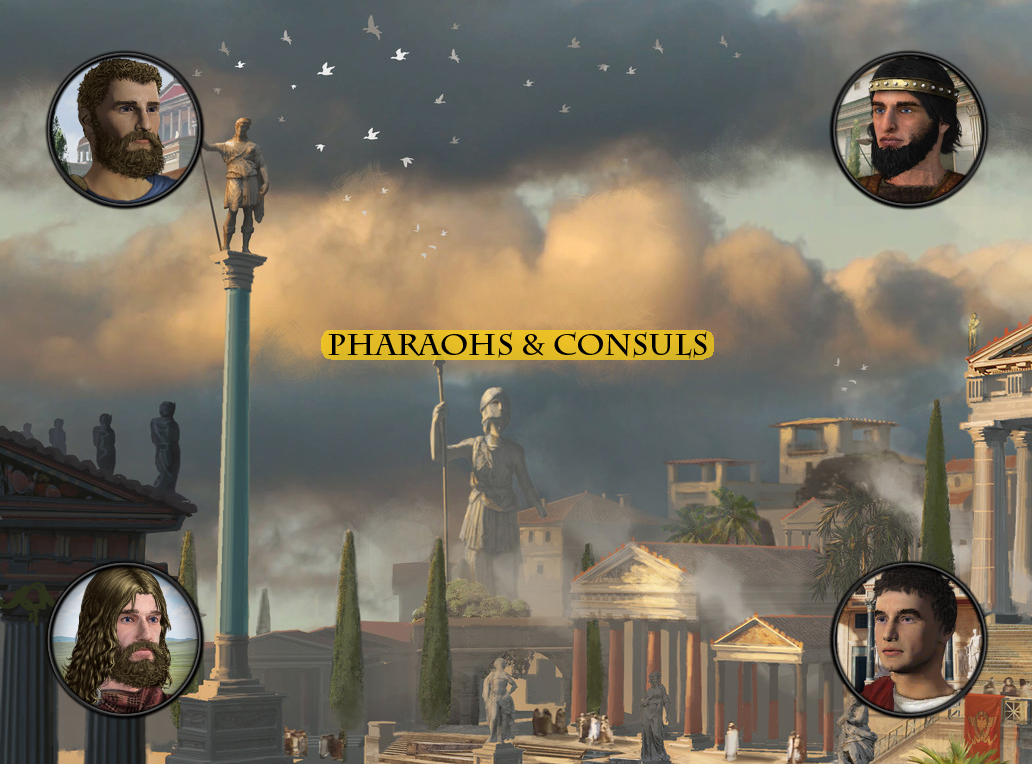 I have worked long and hard without too much public engagement & I'm still in the middle of a busy school term but I wanted to finally share some of the work I've spent so much time on in the hopes that some of you might enjoy it, it is an early playable alpha of my work so far in converting CKII to the times of Antiquity.

To those who have followed Pharaohs & Consuls development over the past few years, and provided feedback from my earlier alpha all that time ago, I thank you.

Development has been slow over the last few years as I am a one-man team, and although I have had several contributors for some historical data and cultural titles/name-lists, it has been difficult for me to coordinate a team as well as work on the mod itself. I especially want to thank tsf4 (Discord name) for his recent assistance in bugfixing and feedback.


There are still many features which I have not yet implemented but are planned. I will release new features and overhauls to vanilla systems as I progress further into development.

Several Government Models have been partially implemented which include a Mesopotamian/Persian model, a partial tribal-monarchy, and a roman republic/Imperial system, these are still early WIP and I plan on overhauling them completely in the next few months.

Much of Britain, Scandinavia, India, Eastern Europe, West Africa (Ghana/Mali) have had little work done so far as historical information is sparse. Much of what is present is fictional characters ruling over a historical tribal/ethnic kingdom which is mentioned in a historical text at some point....but become more fleshed out in later bookmarks as more information is available. Certain Regions may be removed outright due to their minor historical presence and scarcity of information.


The mod has been developed and tested with ALL of the major DLC and the latest patches. It was an early design choice and has been adhered to throughout development, my apologies to those who prefer being able to play without major DLC. It might run while missing certain DLCs, I can’t say as I haven’t tested this functionality. (Cosmetic/Unit pack DLC being present or not shouldn’t cause any issues) The mod will not work on earlier versions of the game or versions of the game without all major DLC/Expansions.

I will also be using the Paradox Interactive Forums and DISCORD to post Dev Diaries and showcase work being done, Alpha Builds will primarily be posted here on Moddb due to the file size restrictions at the Paradox forums. I am currently trying to see if I can also break-up the mod into a series of files to be released on the Steam Workshop as well and I will post an minor update if that is the case.

I am running a Discord server to try and coordinate feedback on features and work as I develop it, it's a new experience for me but might help in getting positive feedback and allow me to showcase more work, please head over there to provide feedback and your impressions of the mod!

I have maintained a record of my permissions for asset use from the paradox forums, PM's, and steam conversations, if there are any discrepancies or issues, please let me know and I will adjust accordingly, if I have overlooked a contribution or forget to list it here please let me know so I can rectify that asap.

Please head over to the Files section here on Moddb to download the Public Alpha Build!

I myself cannot draw almost at all, so a huge amount if not all of, the art assets come from a variety of sources and generous contributors.

The UI work has been inspired and modeled after the amazing work of Arko's UI overhaul and also the 'Marble look' of Imperator Rome.

I have been inspired by many different script/event mods and designed certain elements of the gameplay after them, some code has been integrated where possible when permitted by the original coder/creator.

All of the music and sounds come from a variety of sources, I didn't create any of them and they are mostly used for ambiance and immersion in this recreational project.

Thanks especially to Galle (Paradox Forums) for a ton of advice and his amazing assistance in the modding process.

Thanks to UMCenturion and Causeless of the Ancient Empires Total War mod for their UI asset usage; the majority of the ingame UI design is developed from his work.

Special thanks to Witcher (Paradox Forums) for historical advice and guidance. Thanks to Kryo (steam) for the integration of his transparent map mod +borders and his amazing embossed font mod.

Thanks to Rickinator9 and the Diadochi mod team (AnaxXiphos for Religious Icons, and .Hobbes for flags) for asset usage.

-Special Thanks to Super7700 from the Paradox Mod Forums for several of his amazing Hellenic-themed portrait clothing and helmets.

Thanks to tsf4 for his assistance in bugfixing, hunting down countless errors and issues and fixing many titles and landed_titles issues.

Thanks to AGOT mod team for the use of several art assets and code examples with integration of ambitions and traits.

Thanks to Illathid and the Geheimnisnacht mod team for several coding examples, general inspirations and hopefully more integration of several gameplay/ui assets in the future.

Thanks to the Magnate lords (apg?) for the concept and idea, I built my own WIP resource system using his as inspiration, also used a few gfx province pics (temporary placeholders as the system is still being integrated fully in the game -> will mostly be a reduced version of Magnate lords itself.

Thanks to Lord of Pain for his LTM Terrain and Map tweaks made to it to represent a different visual approach to the world map for the setting of Antiquity.

-Special thanks to In Heaven(steam) for his IN Heavens map graphical overhaul which I've integrated elements of, especially the water effect. -Special thanks to Korbah and the Elder Kings mod team for some asset usage.

Thanks to DaMonkey (Steam username) for potential usage of his “Send Courtier” mod.

Special Thanks to my playtesting mates and contributing Devs, and anyone else who may have slipped my mind at the moment.

Special thanks to DerGroseKA and other members of the Imperium Universalis mod for the usage of a few UI and flag artwork.

-Special thanks to Causeless & UMC Centurion for their UI work and other assets from the Ancient Empires total war mod.

-Special thanks to EthicallyChallenged of Deviantart, and many more for the loadingscreen art used, all of that work is the property of it's respective owners and I have simply used it to showcase Art set in Antiquity versus the regular CKII loading screens.

Pharaohs & Consuls is still in an alpha state with many features still to be added as well as historical bookmarks I'm developing, I hope you can enjoy the work I've completed so far, and if so, please let me know what you think!

Also please use the appropriate discord channel if you encounter any major issues or unlisted bugs: