We review and talk about an Al Jazeera documentary about the Aral Sea; both our thoughts on its subjects and how they relate to Residue. Topics include modernist vs traditionalist views, the importance of information, and being left alone.

Our first post on IndieDB was about a video that helped inspire us to both tell the story of the Aral Sea in general and to include a seasoned fisherman as one of the main characters. The documentary that I'm going to talk about today was published only a couple of weeks ago; so the purpose, in relation to Residue and to the Aral Sea, is to show that this issue is still very important to a lot of people. Just as it ought to be.

Here's the link to the documentary, along with Al Jazeera's own summary below. Their summary mainly involves the Sea's story, while the documentary highlights the lives of Kazakhs post-Soviet; especially from the point of view of Kudaibergen Sarzhanov, a former Soviet minister of fisheries. I'm going to have to assume that you'll watch it before reading on, or what I'll write will only make half-sense.Of course, since it's 45 minutes long there's a good chance you won't want to. But that's alright, we'll have shorter and more intense posts in the future (with things that relate more directly to the game, too). This post will be a bit on the extreme side, in terms of how much of your time we'll take. Hopefully those who watch and read this will find it interesting enough. 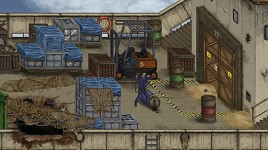 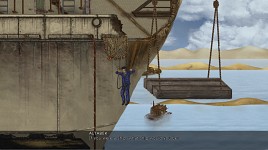 "Leave woods not goods to your children."
While I have some problems with parts of the documentary, I'll focus on the parts that I liked. It tells the story well of how and why the Aral Sea was drained of its former prosperity. It was especially interesting to hear it told from the mouth of one of the people who had the power to affect what was going on, even though I would have thought him to be more remorseful than he let on that he did not do more. One of the things he did, now a senior, that impressed me was how he continued working to inform people of the importance that the Aral Sea still holds.Talking in a radio show to a a man, Sadiyar Öztemiruli, representing new values, their differences in perspective are both obvious and provoking. When Sarzhanov says that the Aral Sea must be restored and the fishermen living in the area be given a chance to return to their former lives, Öztemiruli holds that the Sea is of no use to modern Kazakhstan and should be abandoned, its inhabitants migrated, and let history be history. While I agree with Öztemiruli to some degree, it's such pragmatism that, I believe, is largely the reason for why the disaster occurred in the first place; cotton irrigation would lead to a lot of export revenue and a lot of new job opportunities, both in and around the cotton fields, for the people living along the Syr and Amu Darya. Whatever happened to the people further down the river was of less concern; after all, the Aral Sea was the fourth largest lake in the world so how could it ever be affected by borrowing some of its inflow?

We're informing, not terraforming
In this regard, I got thinking that there are a lot of similarities to Huang He (Eng: Yellow River), which runs through the majority of China. Just like the two Central Asian rivers, Huang He has been used too much, in too harsh ways, causing a third of it (quick source: Wikipedia) to be polluted beyond drinking and even agricultural uses. While the Chinese river is far from depleted, the case still stands that a lot of people, whether due to inability or unwillingness, cannot see or care what happens at the other end of the river.This is precisely why it is so important that Sarzhanov and Al Jazeera help inform people living beyond the two rivers of both the cause and the effects; whether it's someone living in either of the affected countries or anywhere else in the world, so that such a trainwreck of a lake can at least teach people what happens. We don't think that Residue will make any miracles or inspire anyone on just how to restore the Aral Sea, but we do hope that it will help inform you about it, just like those involved in making this documentary. However, we can never make you understand the horrible conditions of living in the area, since we only try to imagine them ourselves based on material like this, since we have no first-hand experience of living in the area. To get an intimate view, we must look to someone who has actually been there, and who still is: the documentary's former fisherman Ahmedov Zhangali.

No fish, no children
Zhangali, much like the fisherman from our first post, is a shell of his former glory. Unlike Zulkarnayev, though, Zhangali tells us that he's lost more than just his popularity; he's lost all of his children to the pollution that's replaced the Sea's water. Losing one's children is often deemed as one of the worst things that can happen to anyone, and the documentary shows us a place where it's more common than not. The burial scene that's briefly included is a horrific picture that I'll carry with me for longer than I'd be comfortable with.While we don't bring up the subjects of birth deformities or infant mortality directly, it is due to these reasons that our Emilio Ostrovsky is raised elsewhere; to ensure that he can be raised at all.We've also tried to capture the inevitable bitterness of experiences such as those shared by Zhangali and Zulkarnayev with our own elderly fisherman, Jumagul, although we go fairly easy on the outspoken tragedy. Jumagul has lost both family and profession when the Sea's shores receded, and his character is an important representation for all those who have been in the situation. While the other two characters may take more place in the spotlight, Jumagul is the one who best captures the Karakalpak depression.

I hope that Zhangali would agree and that, should he ever hear about Residue, he feels neither insulted nor pitied. Only recognition in that while his genes will not live on, at least his legacy will.