We have done major updates for the PC and mobile version these past few months, with a huge amount of bug fixes and improvements!

Hello Fractal Space players! The mobile and PC versions both had major updates the past few months! We will discuss them in more details here.

The latest updates of the PC version now support a new Dynamic level of Reflections in the Graphics options:

Static reflections are precomputed and greatly optimized, so it should be fine keep Reflections to Medium or Low even with an integrated graphics card. The main drawback is that as the environment changes (a door opens, a screen changes color, etc.), these new changes are not seen in the reflections. It is a performance VS realism compromise.

The new Dynamic reflections level uses Screen Space Reflections and solves the issue stated above. However, it is resource demanding, and should be used only if you already have a good framerate. It usually lowers the FPS significantly on integrated graphics cards.

If you are on integrated graphics instead and not a dedicated GPU, you should keep Reflections to Medium or Low level.

The Electrified Grounds were only made of an electricity visual effect. We have improved them:

Vent doors were using a small regular door visual. This was temporary. They now all have been replaced with the new visual! They have been improved to:

The Depth of Field effect can simulate the blur that can be observed by a real-world camera, when it is focusing on close or distant objects. If this effect is enabled, it will be used in the following cases:

This effect is demanding; if you have an integrated graphics card and a low framerate, it's best to keep it disabled. 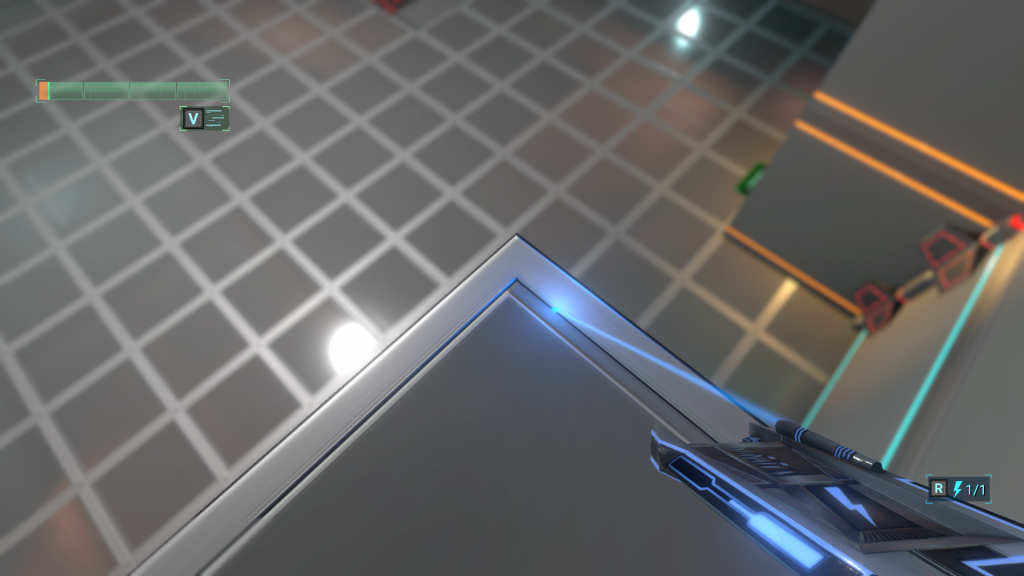 Aiming at close object: distant objects are blurred
Works if Depth of Field is Enabled 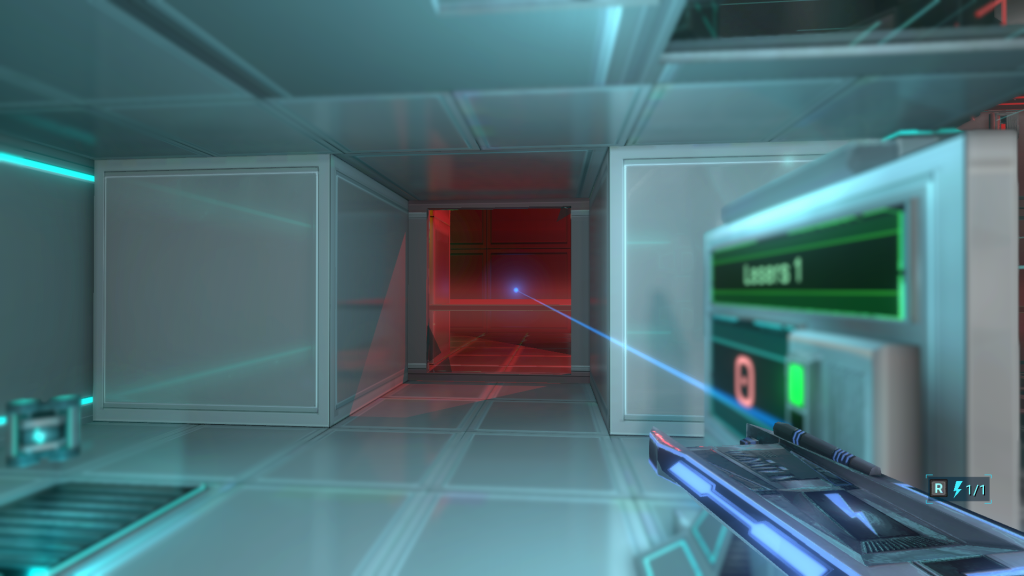 Aiming at distant object: close objects are blurred
Only works if Depth of Field is Enabled, and Reflections are set to Dynamic

The aiming laser for the Taser -Gun has been reworked significantly to fix the following issues:

You can see the issue described above, in the following image: 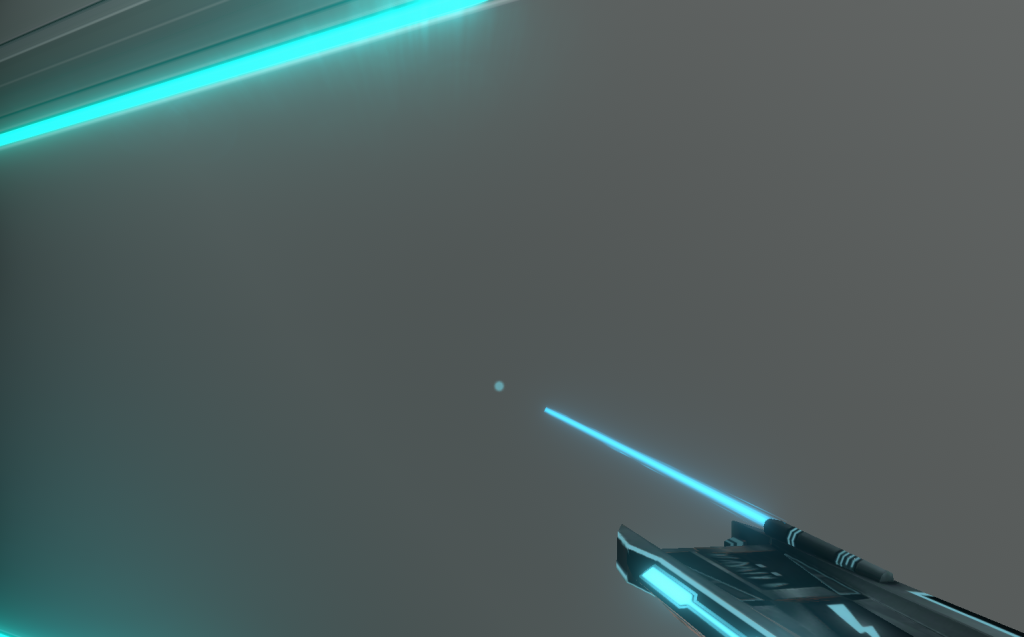 Laser end misaligned with point. Shot will not be at the center dot, but at end of laser.

Here's an image of the updated version of aiming, with these issues fixed: 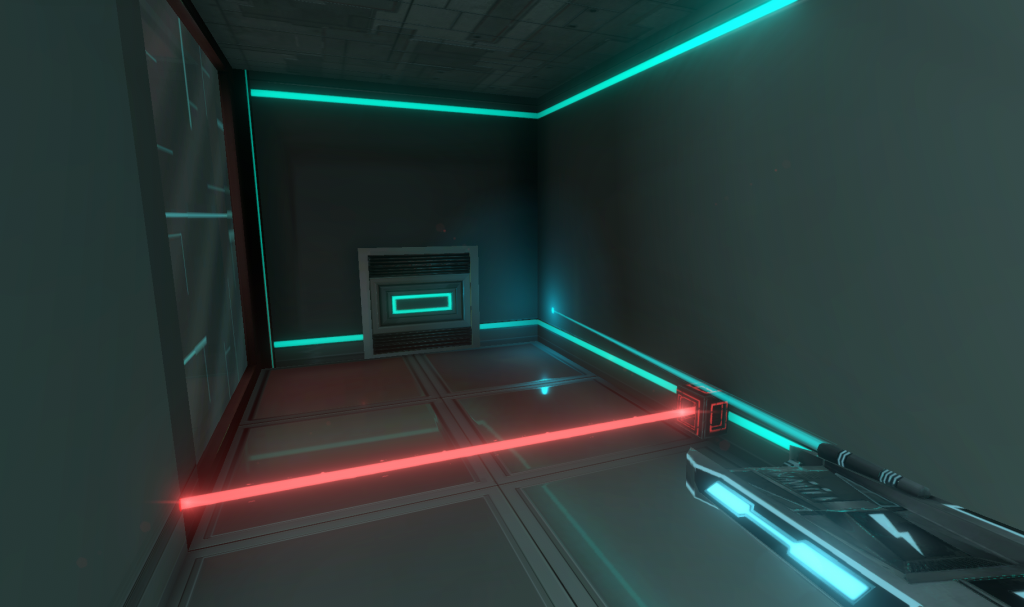 New aiming laser point is 100% aligned with laser and shot, and has dynamic lighting.

In the game, for quite a while, it was possible to get on the wrong side of some doors as they were closing; this would result in being softlocked, requiring to reload from last checkpoint.

Since we have introduced Hyper-Speed in Chapter 3, there were 3 major design problems to solve:

In order to solve the issues above, we have introduced a new door type: the Hyper-Door:

With this new door type and other changes to the door closing system, it is now impossible to go backwards behind a closing door and remaining stuck. This means many softlocks were solved.

If you find any softlocks while playing, let us know!

We have added 3 new upgrades to the game; the upgrades distribution has also been changed to reflect the new upgrades and a few new improvements were made:

Allows to zoom while aiming with the Taser. Simply use the scrollwheel or Directional Pad Up/Down while aiming to start using the Scope. The Aim Stabilizer is disabled while using Scope to allow precision shots.

It has 2 levels of upgrade:

Taser aim assistance module, which automatically locks aiming to the closest aimed at target. It has 2 levels:

As this upgrade makes the game much easier, it is only available from Chapter 2.

This system is hard to make comfortable in all situations. At the end of this post, we have some additional details on how it works ;)

You can see these 2 upgrades in action in the following video:

This upgrade informs the player if it's safe to land below him. It has 2 Levels of upgrade:

You can see this Hazard notification at the bottom of the screen:

It will be improved with animations in future updates

We have reworked and improved elevators in all Chapters of the game:

We have added a new Skip path in Chapter 1! It is located in the very first lift, and is only accessible after activating the elevator, using Dodge in New Game+.

In addition, this new skip path contains a Bonus Room (currently empty), in which you can acquire an additional upgrade. A new Bonus Room has been added to Chapter 4, just before the Enhanced Camera. It allows you to acquire an additional upgrade.

This is one of the rare Bonus Rooms that will be accessible on the first run and not only in New Game+, as it doesn't require a specific ability, and is only protected by a Breakable Window.

Work in Progress room of Chapter 5 on PC

We have been working a lot on the PC version of Chapter 5 in parallel. Progress is slow, but steady. It's a complex Chapter, introducing quite a few new elements, similarly to Chapter 4 on PC.

We can't give you too many details as we don't want to spoil your first experience with this new Chapter when it's available to play. Here's what we can say:

Work in Progress room of Chapter 5 on PC

In parallel, we have also worked on the Level Editor, but we are still currently focusing on Chapter 5 and mobile updates, so it's still not ready to be tested. Here's a bit of news on the status.

We have started to create a basic user interface (currently, all icons are the same) to add objects, and edit selected objects, in addition to a customizatble Quick Access hotbar: 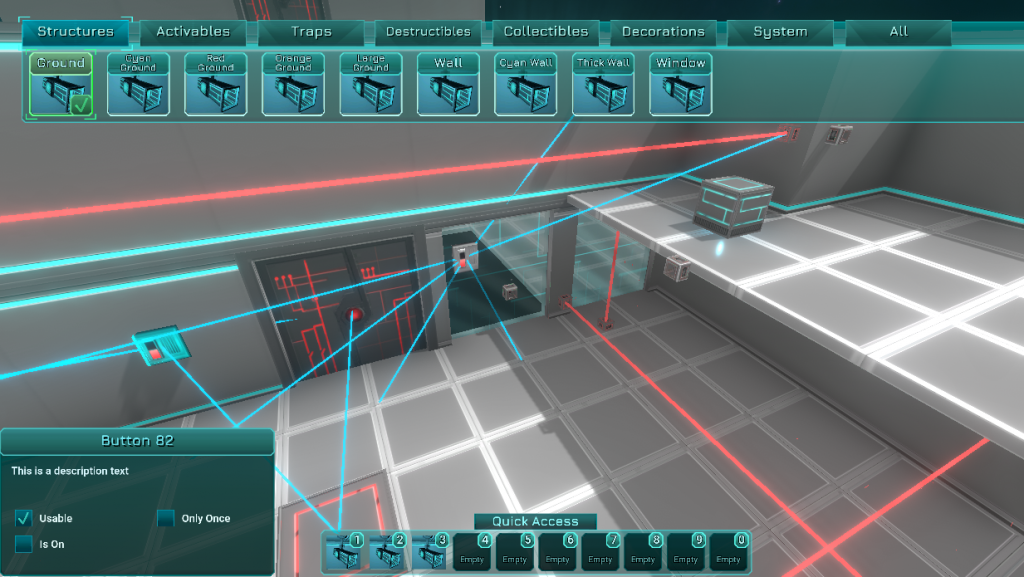 Here's a list of what we need to work on before a first version can actually be tested or shown:

When we will have the features above ready, we will either upload a video or livestream a demo of these basic functions before it can be tested by players ;)

We have fixed hundreds of bugs in the last few updates; one major victory was made on mysterious crashes some users were experiencing every time the game was trying to reload the latest checkpoint.

The crashes upon last checkpoint reload were linked to some Graphics Cards not supporting some specific instructions.

After a lot of work and testing of special development builds from these users (thanks again for helping out!), they are finally fixed and these users can enjoy the game again without crashes!

In the last 2 months, we have worked a lot on many updates for the mobile version of Fractal Space, on both Android & iOS! 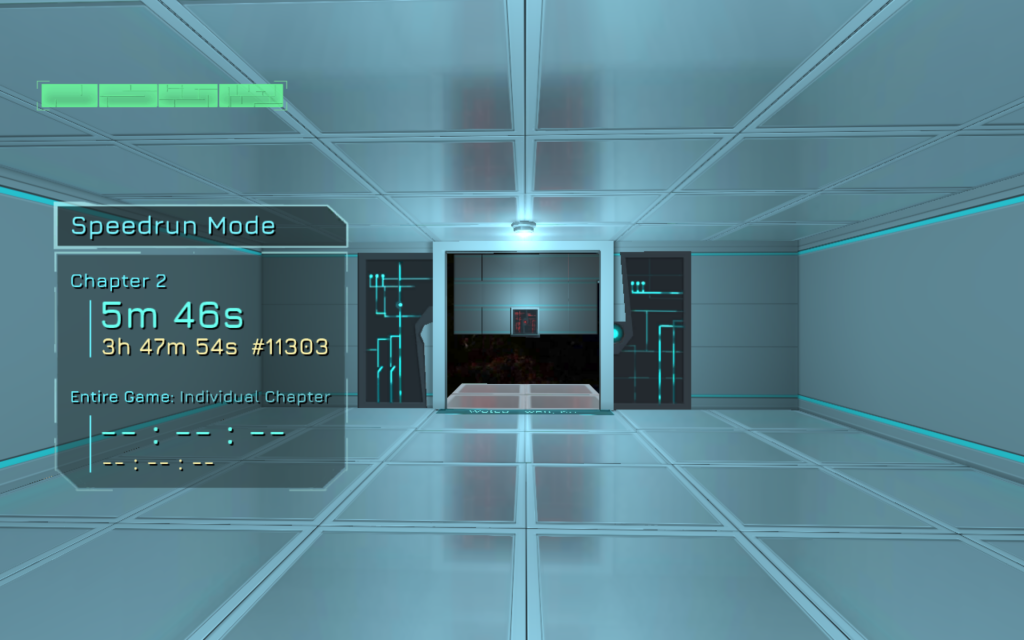 You can see more details about what is new in the Pocket Edition by checking the dedicated Changelog page here.

Here are a few additional details about the Aim Stabilizer system:

That's it! Thank you all for reading and see you next time! Happy gaming,

This game looks wonderful. The aesthetic is great and the music adds to the atmosphere. I'll keep an eye on this game.