Hello everyone. I think it's time for a Patch Preview. And since there was no patch last week, its rather a big one. In this preview I'll cover the major changes and additions, then the changelog released with the patch (either later today or tomorrow) will document the rest. So, without further ado:

The main change, which is fairly obvious on running patch 1.0.6, is the lighting. The whole system has been redesigned, to make it not just more visually pleasing, but also limit the amount of sight you have on entering a new room. 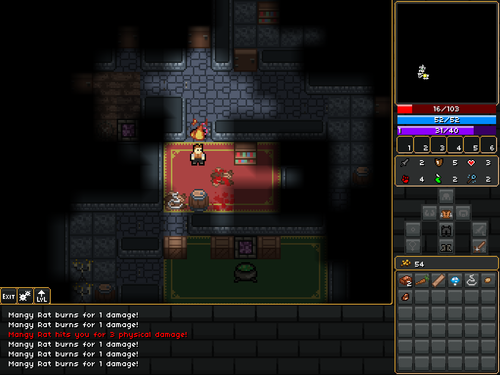 All static world objects (bookcases, crates, barrels, etc), accept those which give off light, limit the players sight, which completely changes how you go about exploring a room. This means that large rooms such as libraries, if careful, can be navigated without monsters seeing you by keeping static objects between you and them, rooms initially blocked by a breakable object cannot be viewed without breaking the object, and enemies can hide out of sight ready to jump out on you. All of this brings a whole new level of strategy to navigating the dungeon.

Talking of strategy (it's almost like I actually plan these things before I write them), the way that the player and enemies take turns has been reworked. Instead of the player taking a turn, then all enemies taking their turn at once, the turn counter now makes a stack of all units visible, and steps through that counter one unit at a time. This means that there is no mad shuffle of enemies at one time, no deafening mass 'everyone's attack at once' sound, and no mad splodge of damage numbers splattered above the player's head every other turn. You can now view what is doing more damage, and predict what enemy will move where so that you can prioritise your next move better. 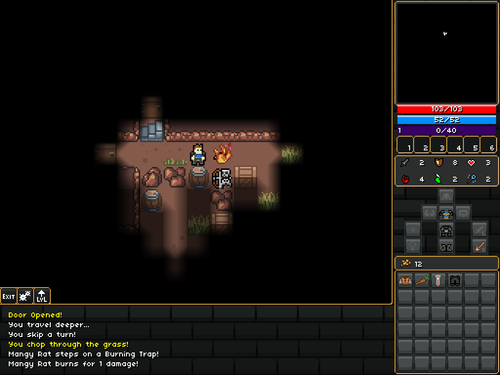 This update was also meant to introduce the cave level to the game, and I have spent a lot of the last few days working on it. However, while it the level generates and stairs generate down to it, it's having some odd effects on save files (current and updated), and I'm certainly not going to release it while that is happening. So caves are being pushed back to the next patch. Apologies.

Will the first weapons you find still be weaker than your current weapon? You start off with a level 2 sword, but find level 1 swords at the begning, which is kinda useless. Could you make the the first swords you find equivelent level?

The first swords should be better than the starting weapon now. If they're not, let me know and I'll get that sorted.
~TheIndieForge