Partial Quest is a Tabletop Graphic Novel. It blends Gamebook style Conversation and Document collecting with First-Person, Turn-Based Dungeon Crawling. You move among the game pieces on an imaginary table top while a charming story and papercraft style guide you through a black and white, ink adventure. It began life as a mobile first game, but has now switched target platform to desktop (PC, Mac, Linux). This update covers the conversion progress.

Posted by GrindCrushLLC on Nov 4th, 2015 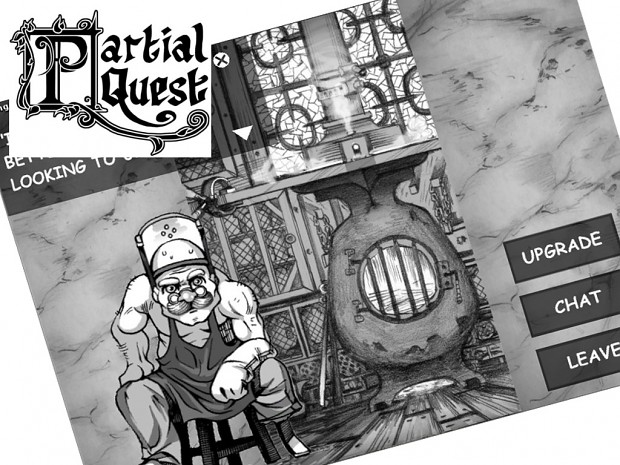 Welcome back! It's been a long time. I returned to full time development on Partial Quest at the beginning of September after Swipey Rogue shipped. There have been many changes in the past 2 months so this update is a quick summary to bring you up to date.

First and foremost, I want to announce that Partial Quest will be a PC first game now! I will be targeting Steam with a Greenlight campaign announcement coming next month.

I feel this project will create the basis for future projects that build on the Partial Quest codebase and toolsets. Those future projects may include some of the tools I'm creating and could become a platform for modders. To get there, I want to build that foundation with a desktop focus that can be ported to mobile but not be restricted by it. Partial Quest (and a couple more projects coming next) will pave the way by building that codebase and toolset, and breaking First-Order Games onto Steam to open that production / release pipeline.

After Partial Quest, I will complete a couple more projects with the foundation to enhance the features and tools, then I will try to release a simple game (on Steam) that also includes the toolset so people can take it and mod with it. We'll see how it goes, but that's the long term plan.

Let's Review How We Got Here!

Here's a quick summary of the various lives Partial Quest has already lived.

Began As a Mobile Practice Project:

It began as a holiday project nearly 2 years ago (challenged myself to make a mobile rpg in 2 weeks): 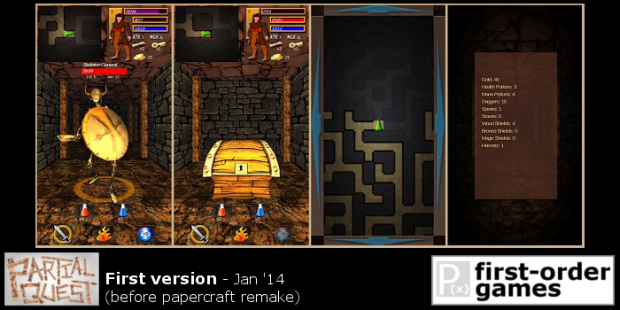 Revived With a Papercraft Tabletop Theme:

A year later, I dug it up and converted it to a papercraft style (prototype): 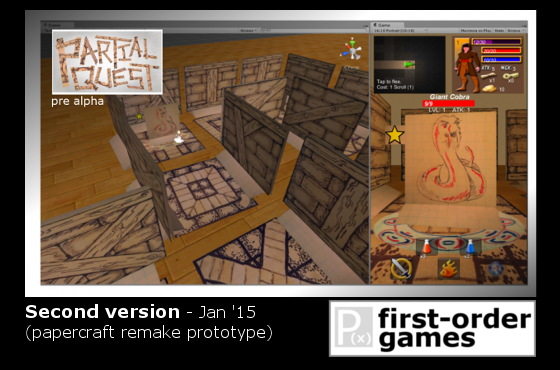 This winter George from StudioNJ came on board to overhaul the art and collaborate with story and game design. The game then went on hiatus while I completed Swipey Rogue. 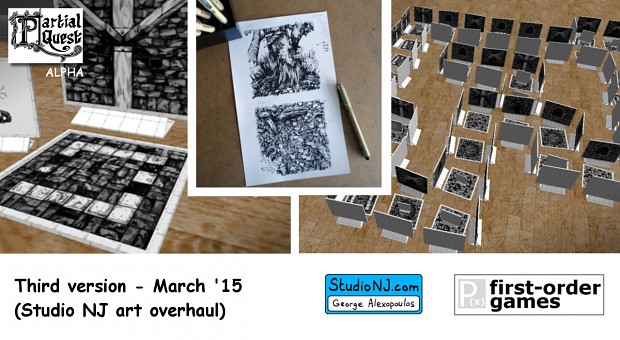 This Autumn, I returned to the project. Since so much time had passed since this project was originally created, Unity had a major version update. I updated and fixed the project, then from my Swipey Rogue experience, I was able to get the game running on iOS and Android quickly (replaced environment and character art, but still old Menus and HUD). 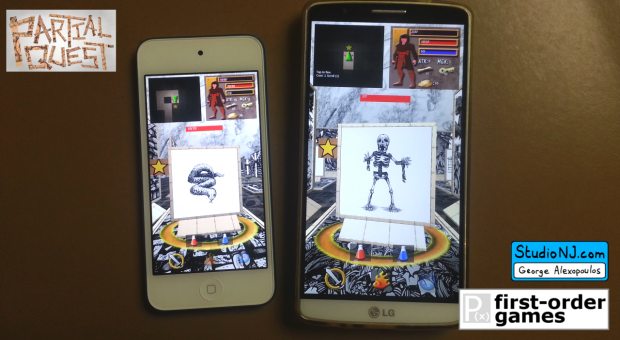 Along with the Unity update came a completely new UI system. I researched the new UI system and completely replaced all the menus and hud (except the minimap and map, still on the to-do list). 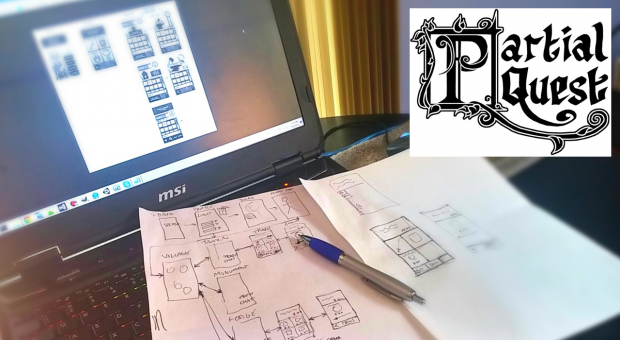 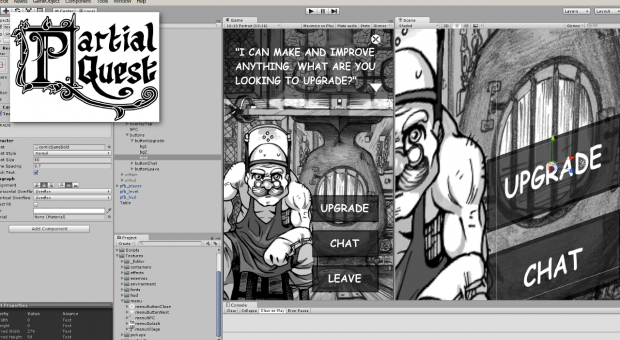 While implementing all the new menus, I started to think about converting to PC first. The advantages compelled me and I started to convert the project. We couldn't redo all the art, so the layouts were opened up to reduce overlap. Here are a few samples of early screens still in progress. 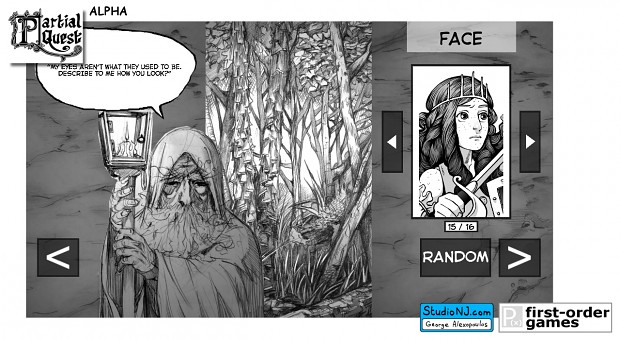 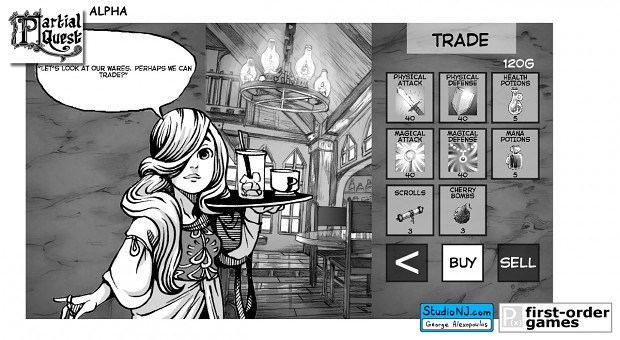 The in game camera view was adjusted and the HUD was completely redesigned. The mini-map is still being developed and the map screen doesn't exist yet. Tiling table top and skybox still temp. But it gives you an idea of the new view. 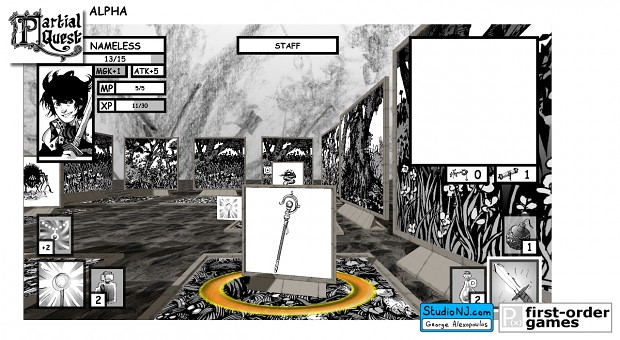 Thanks for tuning in and checking out the progress. Lots of big changes, but I think everything is for the better. It's very nice not thinking about mobile for a while. What a headache. I do still have some other mobile projects still on the go though so I'll start new project pages for them here shortly.

Stay tuned for the next Partial Quest update where I'll be explaining and demonstrating the new dialog and quest progression editor tool that is used to create the game progression and all the dialog tree cutscenes.

Not really my cup of tea but it does look good. Good luck!