From Godgirlsandgamedesign.blogspot.com"In 195X, two warring factions: the Imperiarchy and the Republicorp, are in a stalemate. Only one way to break this: time travel."

Paradox, Grandfather is a game I'm making for Experimental Gameplay: Time Manipulation for August and September. Details are subject to change. Note that the link provided for the download provides only a mockup prototype without gameplay, yet.

The game is set in an alternate past, where the Imperial States of Ohio (the Imperiarchy) and the United Sozist People's Republicorporation (the Republicorp) are embroiled in an apocalyptic Cold War in 195X. The weapon that caused this war is not the atom bomb, but the time machine. 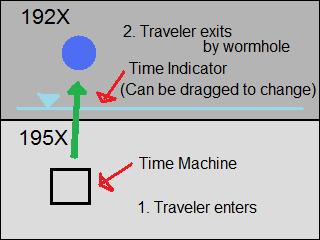 The factions must send units from 195X to 192X, but also can fight in 195X. Only in 192X can mission objectives be met. There is a Time Indicator in which the player can change so the player can send units any time in 192X. For example, if the Imperiarchy captures the "Grandfather"(revealed in a future InDev) in 192X, the Republicorp can rewind the Time Indicator and send troops to prevent his capture. Or the Republicorp can drag the time indicator and place troops in the future to stop the capture at the extraction point.

That is all for now! Gotta get back working. :)