We have a meaty update this month. It's time for you guys to meet some of our characters from the game! There are also some intresting environments for you to take a look at!

Here's an update on what we've been doing the past month.

We've certainly started to make a lot more assets and get more functionality implemented. Unfortunately, not all the functionality we can show currently as it doesn't look super cool. But we can show you our new environments and our characters we have been working on. Oh, and also some mobs! :D 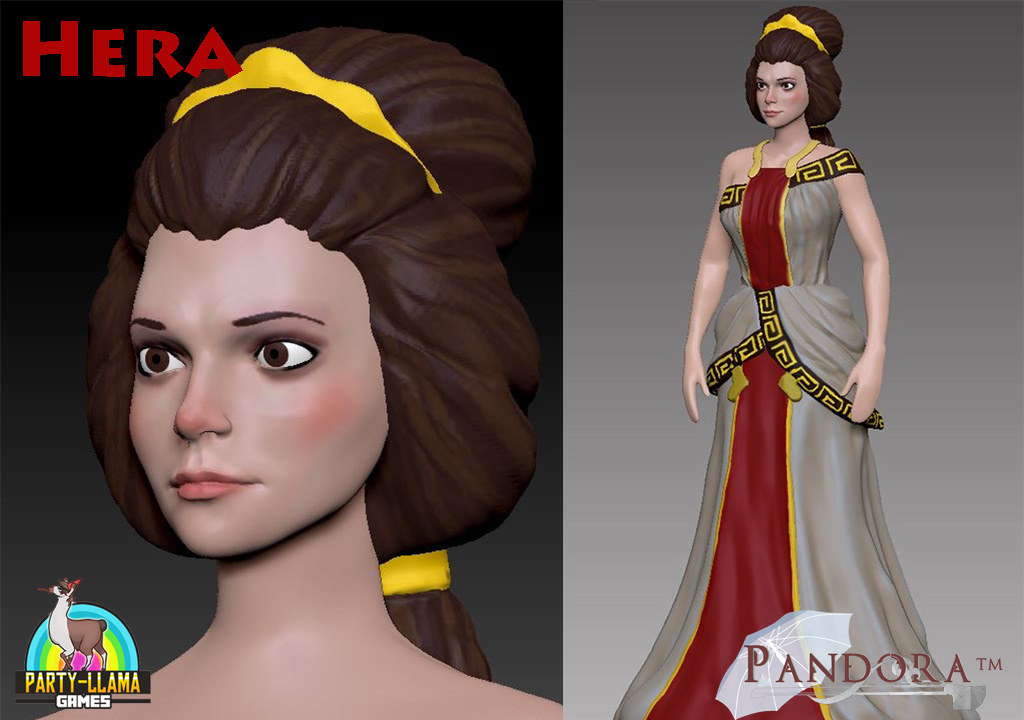 So Hera is Pandora's mother. In Greek Mythology, Hera and Zeus were together while Zeus messed around with the other gods. We still wanted to keep Hera and Suze together, put play down Zeus the player. ;) Make it a bit more friendly for audiences. So here is some background on Hera:

Hera is Pandora’s mother and lives in the village Kome. Hera is a very wise woman and looks after the village as the ‘Village Elder.’ She doesn’t like to talk about Pandora’s father, who is in fact, Zeus.

Hera is a gentle woman with much knowledge to share. She attempts to guide the explorer’s spirit within Pandora, but she hasn’t had as much success with this as she would hope. Hera is slow to anger but quick to reprimand those who cause trouble or hurt others.

Though many wouldn’t guess it unless they knew her past, Hera’s had a tough journey to learn the wisdom she knows now. She has earned her place of respect amongst the village, for once she was a fierce warrior - and though she had a greater thirst for adventure than even Pandora, her thirst was unguided. She grew up in Thile, before joining a mercenary band and leaving in search to find a better life beyond new horizons. No place was her home, and she roamed freely; taking contracts wherever the winds might take her.

What she saw of life caused her to become cynical, and carefree; wherever she looked, she saw the same corruption creeping up through the world, and the line between good and bad began to blur beyond distinction. She had never experienced love and came to question whether or not there was any good in the world. But despite her cynicism, she still cared—somewhere—and through her display of apathy, she was running away from herself, and the deeper questions which constantly ate at her.

One day, entranced by her fierce skill in battle, her determination, and inner strength, Zeus found himself fascinated and ensorceled by a mortal woman for the first time. Yet he was a God, could see through to the heart that lay beneath, and knew the questions she longed to have answered—he knew of honour, and of righteousness when she clearly had abandoned those long ago.

Eventually, he took her by the hand and showed her. She didn’t know who he was then, and at first she was reluctant to love (she never had, not truly, and the fact that she was falling terrified her), but eventually he convinced her to switch sides, and ride to the defence of the village (and its temple) she had previously been paid to attack.

At the sight of her as their enemy, most of her comrades left the battlefield, and those who didn’t were brutally slain. Though the battle took it’s toll on her, she survived, and for the first time in her life the villagers welcomed her to stay, should she ever want to make this land her home.

That night, Zeus told her who he really was. In the battle against the temple (though they never gotten past the outskirts of the village) he had felt the influence of Cronus, and knew that his fears had been correct (this is just before Poseidon gets turned into a statue. Zeus goes to tell him his proof but it is too late). For her safety Zeus cannot tell Hera any of this, but asks her to trust him, and then leaves without a trace - his last words being a warning that Pandora must never know who her father is.

For this reason, Hera has never told anyone the name of her lost lover. Most think he died on the battlefield that day (though Pandora refuses to believe it, she knows he’s still alive somewhere), and as such showed her great respect as she raised her daughter alone.

Though many were curious about what had happened, Hera never breathed a word about it, and eventually, the whole event came to be unspoken within the community.

I hope you enjoyed reading that. A little backstory on one of the main characters in the game. it feels like we haven't been sharing too much about the story on our blogs, and that's going to change from now on. Let us know in the comments if you enjoy reading about the characters! 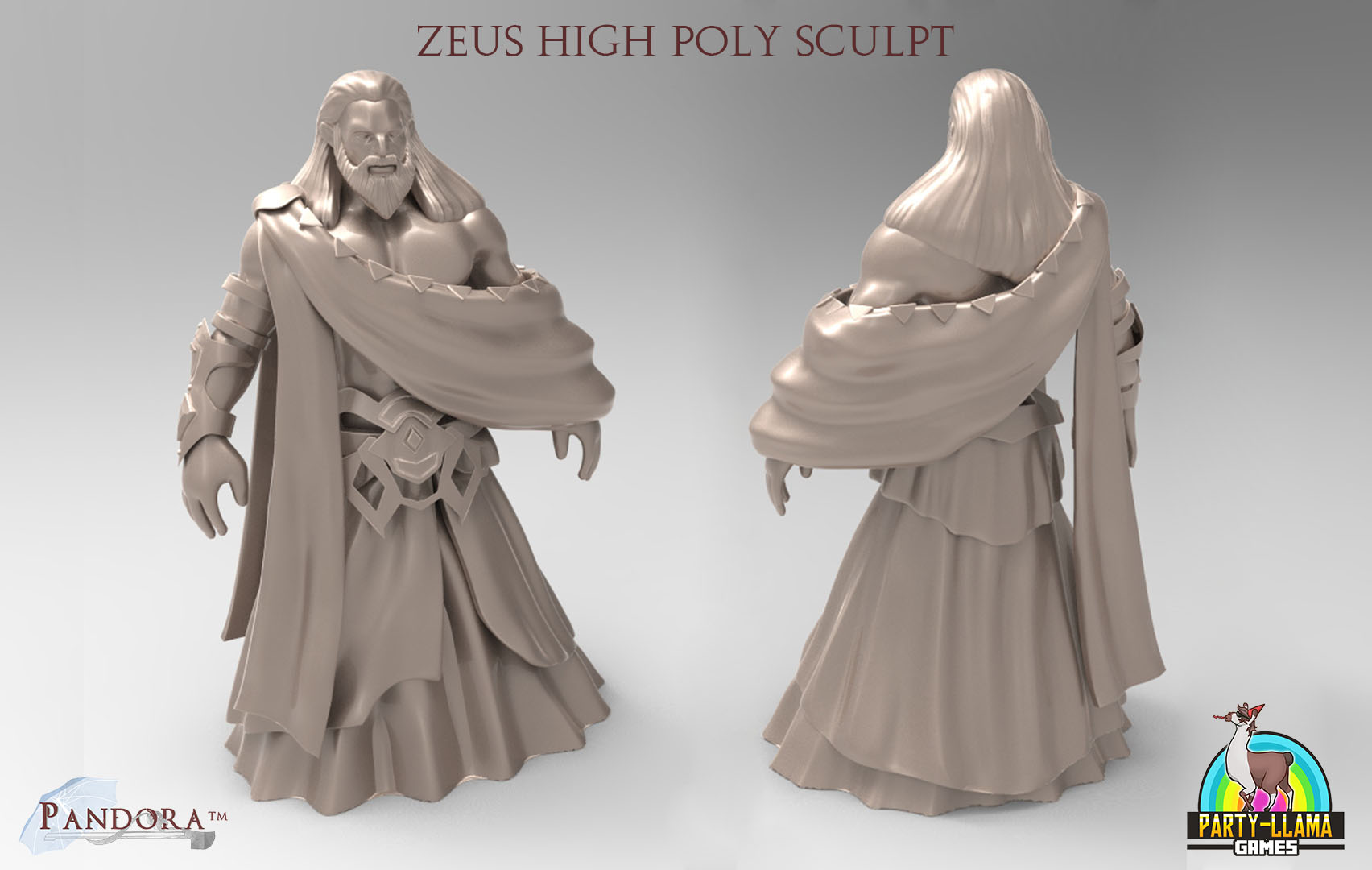 So now that we've talked about Hera, learn more about Zeus below!

Zeus had always had a fondness in his heart for humans, but never in the fate of the world would he have expected to fall in love with one.

After waging the Great War against Cronus and saving the mortals from the hunger of the Elder Gods, he became disillusioned as he slowly saw humans corrupting themselves again, and Hope slipping away once more.

One day roaming Gaia in solitude, he saw a young human who’s fierce determination rivaled his own. Only that this woman too had seen the encroaching sorrow in the world, and--so like him--had grown cynical because of it.

He resolved then and there that if he could save this woman, there was Hope for humanity yet. And so he did, but by doing so he found himself in love with a mortal--whose lifespans were but the blink of an eye to the Gods.

But this was ok, and Zeus was convinced that he would become mortal and spend the rest of his life with the one he loved. But the day he was going to tell her, his fears of Cronus were confirmed, and he knew that for the sake of his love, his unborn child, and the world, that he could not.

He left her soon after, with a heart burdened by the sorrow of the Gods. He planned to tell her nothing, promising himself he would return one day soon--but at the hurt in his eyes he professed to her who he really was, and why it is he left. Though he couldn’t tell her everything, he knew that he was the only one left who could stop Cronus--even if he would sacrifice himself to do so.
Only time can tell if a new Hero will rise to defeat Cronus, and Zeus plans to be around for them to succeed.

So below we have some gifs for you! We've been working on Kome village and also our new Environment Nysa Desert! We have some environment description for you below to get to know what environments we are adding to the game.

At Gaia’s softest beginnings lies Kome, gentle and Mediterranean. Kome Village is one of the oldest villages know to man in the region of Gaia. By the ocean, its lands are rolling hills of grass and soft sea-sides.

Much of it is farmed by the local peoples, filled with grapes and fruit orchards, as well as herds of animals, and harbors filled with boats and gulls both where the seas are fished. But there are places where the land runs wild, beyond the outskirts of Kome Village; where the fair grasses sway and the curling forests have been forgotten, left to tend to their own.

Vines and shrubbery intertwine the boughs of stout sea-swept trees, none of which grow much taller than the houses. The largest and most worshipped temple across Gaia is housed in Kome Village and contains all of the history and information about the towns and Gods. There are no guards to protect Kome Village, but there have been no wars for many centuries since the great titan war.

Kome Village is home to Pandora and one of the main places that are kept safe when the demons escape the box. Kome Village begins to attract more attention in the game as time goes on. The main temple starts to become more of a home for people who have lost hope, and pilgrims start to become more often as people travel far and wide in Gaia. But for them, it is enough, and the people of this land are humble and warm in their greeting of slow, day to day life. 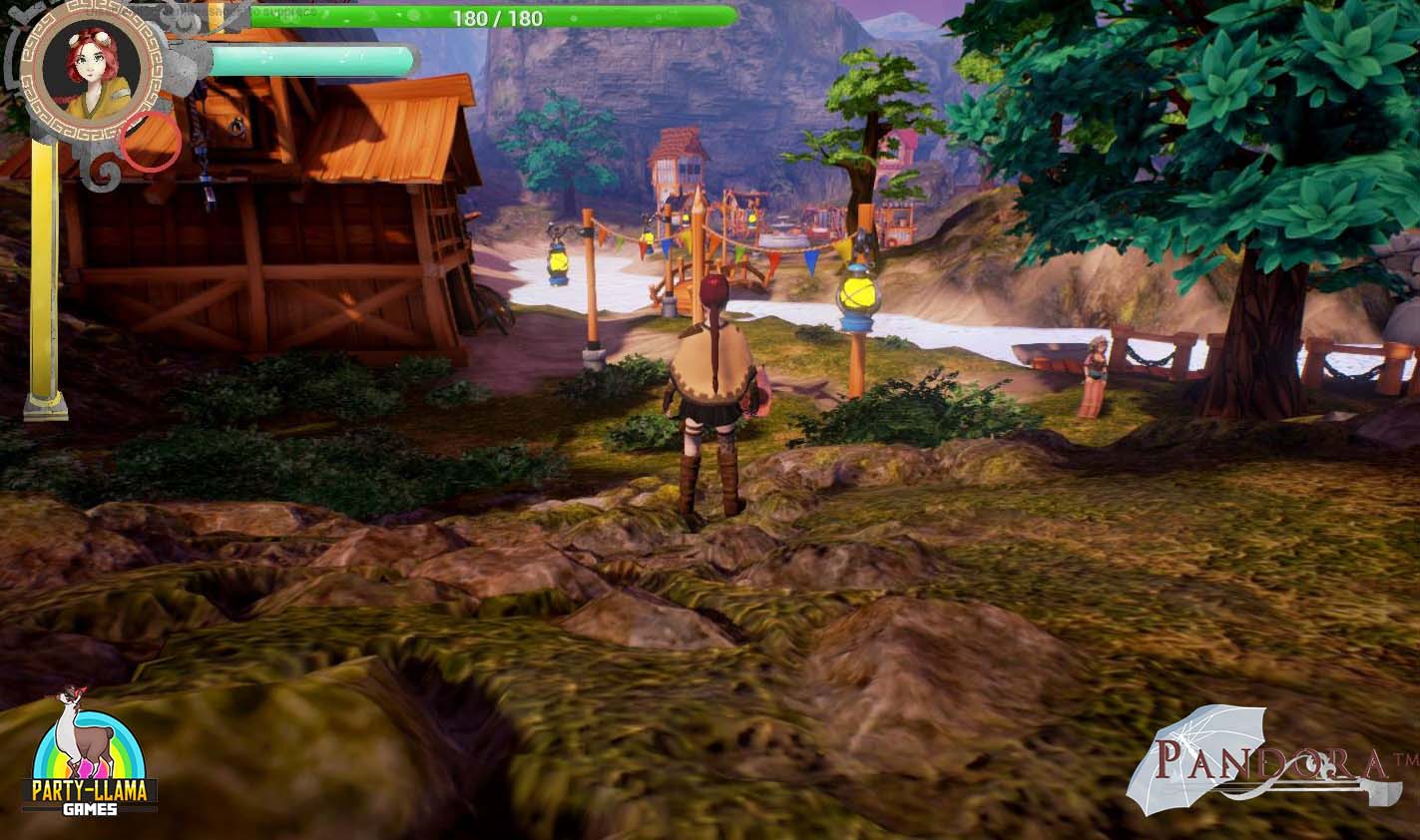 No one has delved deep into the Cave of Destiny for a long time. The traitor Cronus was executed in battle by the three siblings centuries ago, his vengeful spirit is rumoured to haunt the cave to this day. His hatred for the humans turned him into the fiend he became, and his essence lives on in the Cave of Destiny.

Nysa. A barren land once filled with ancient glory now left as nothing but dust on the winds and the cries at the marketplace. It has the second to highest population in the whole of Gaia. Ruins of man and nature both fill it’s windswept expanses, even as it’s peoples inhabit them yet - building modern shelters onto them in an effort to house their ever-expanding population. The landscape consists of sandy dunes which have occasional sandstorms. Oases are spread out across the land, with a big lake on the outskirts of Nysa Desert.

Dunes there are, filled with mirror-like oases, and great lakes which make the centre of their existence. But so too are there desolate plains, filled with the rocks and flat mountains which have been worn away by time itself. Sandstorms are very common in this area. Protective gear is worn at all times by the people. Face masks and protective clothing against the heat strokes. The area looks very Arabian, with small square yellow buildings. The people are very busy in the area and quick to protect themselves against any danger, but they are also very friendly and also persuading when trying to sell goods.

After having a look at our environments a bit more, now let's meet the mobs that live in them.

These flying creatures can be found all over Gaia, but some only in certain parts. The one we have started on is the bottom middles creature. He lives in Nysa and will whirl up a mini sandstorm when attacking Pandora. Make sure you put up your umbrella in time! 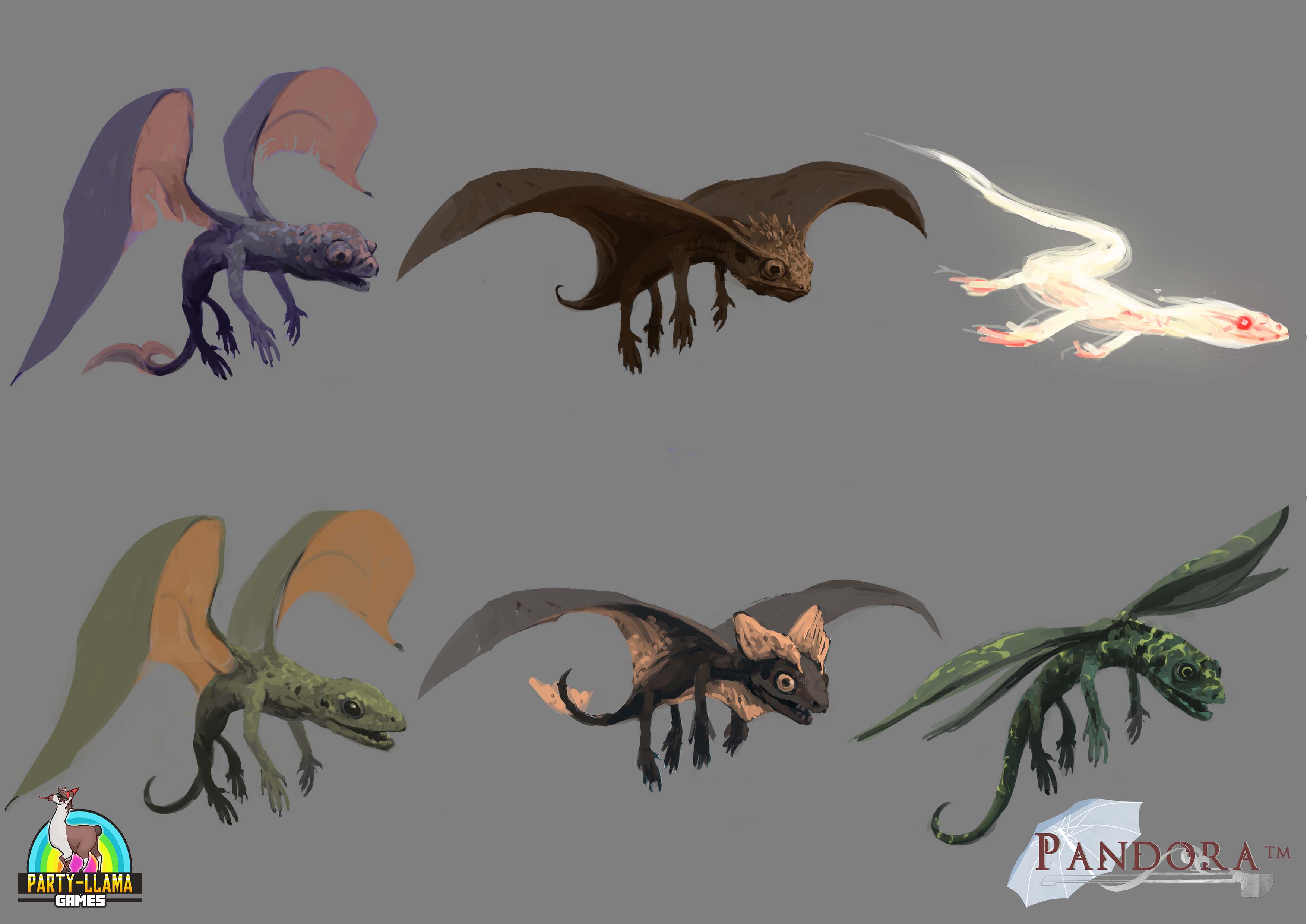 Well, that's it this month lil' llamas, but we'll make sure we keep you guys more up to date. Please let us know in the comments what type of things you'd like us to talk about next or even characters!

Take care, and keep on gaming!

Thanks, means a lot!