Post news RSS Packages of Files and Pieces of String 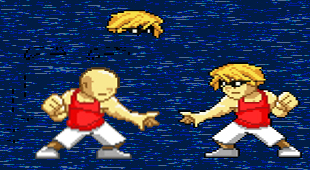 So, jumping right in:

A rather modest goal that I had early on was building a default package file format for Super Hematoma to externally contain sprites, level information, game data and the like. I’d build a simple toolset to pre-construct these package files, as well as deserialize resource data back out of them in real time for the game to use. Implementing this “rather modest” goal stretched out across what seemed like an eternity of development time, which can be pinned on a number of reasons (the common “real life happened” cover, caffeine deficiency, the ever-present temptation of having hundreds of little plastic cartridges stuffed full of nostalgia surrounding me at my workstation at all times, the like). Mostly though, it was just bad planning and time underestimation.

Honestly, if making a game (maybe any software? maybe anything?) is something you really want to do, make sure you’ve got your priorities and goals straight from the start; if you’re a tinkerer / crazy nerd, building everything from scratch can be a great temptation, but expect things to proceed slowly. Only do it if you really like doing it (which I do) and have time (oh, uh, about that…). It’s always fun when the todo list grows faster than the completed list. Even when you’re as cool as I am, you can’t defeat common sense.

Anyway, this undertaking coincided with a rather large change in the animation engine to build character sprites out of separate parts, as has been previously explained, and as Steve has so graciously filled pages and pages of our blog with people pieces for. I’d also mentioned the real-time outlining of the characters previously, which has been integrated into the new engine. Data format for descriptions of stages, items, game parameters, etc. will be described in XML files which are currently built into the package files as well.

So, where are we?

What’s coming up next?

Why did all this take so long?

Back to Gradius 2! Stay tuned!