We share the results of our Kickstarter Survey and what it means for the future of development.

Back in March we launched our first marketing campaign. Our focus was to get Outland 17 “Greenlit” on Steam and raise the additional funds we needed through Kickstarter. Thanks to overwhelming community support we were successfully Greenlit, but then we fell short of our crowdfunding goal, despite the support of 258 backers. The feedback we received during this time was especially insightful, so we decided to reflect on how to improve our game. Based on feedback, we outlined 3 areas for improvement, as follows:

After the Kickstarter, we sent all of our backers a survey on how to improve Outland: 17. I’m happy to share these results in raw form, and I will also share our goals to meet these expectations moving forward. If you have additional thoughts or questions, please let us know! We love talking to each and everyone of you, and are grateful for the support. 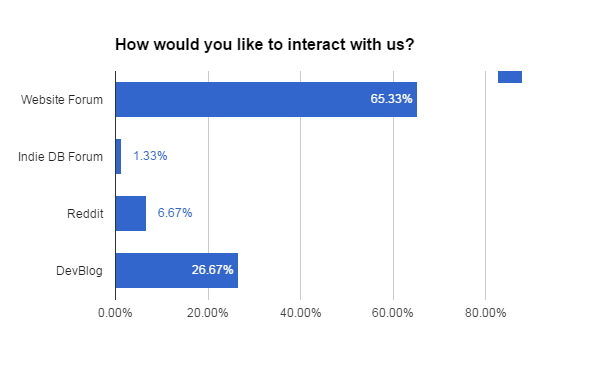 We want to keep a dialogue open with our fans. We tried a number of things ranging Facebook to Twitter but didn’t built a real community, so we asked how you prefer to talk with us. We were surprised to learn our fans really wanted a forum page. We had believed a reddit page would win out, but this was in less demand than a DevBlog, we’re going to build a forum! 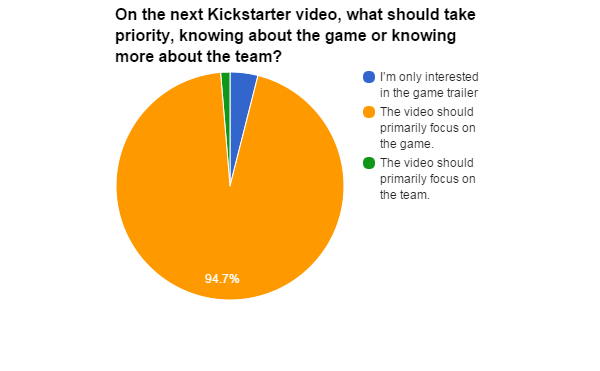 We believe our Kickstarter video needs the most improvement. Our video focused mainly on our team, but an overwhelming majority said they wanted to know more about the game and less about the team, so for the second Kickstarter campaign we want to create a great trailer which lets the game speak. Games like Hyper Light Drifter and Planetary Annihilation did this well and and were likewise well-received. According to our survey, we ought to make a game trailer which ends on a clip about the team – something akin to Halcyon 6 and Moon hunters’ trailers. Moving forward, we intend to make a 2 minute trailer with only a brief section on the team. 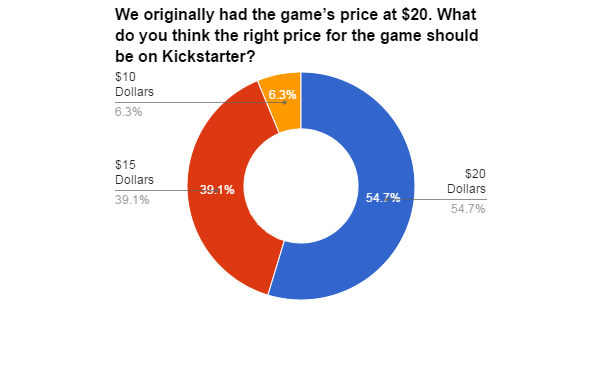 This was the hardest question to analyze and understand correctly. Fans didn’t always give straightforward answers, making their replies difficult to chart, and online debates question the efficacy of early bird discounts. We learned we can do a better job of communicating the project scope so backers can better understand the value of our game. Fans felt very strongly about how much they would or should pay. Some encouraged us to keep the $20 price rather than risk undervaluing our efforts, while others believed dropping the price would increase our volume. I will avoid committing to a price for our next Kickstarter attempt for now, but I will say we have decided to change approach. 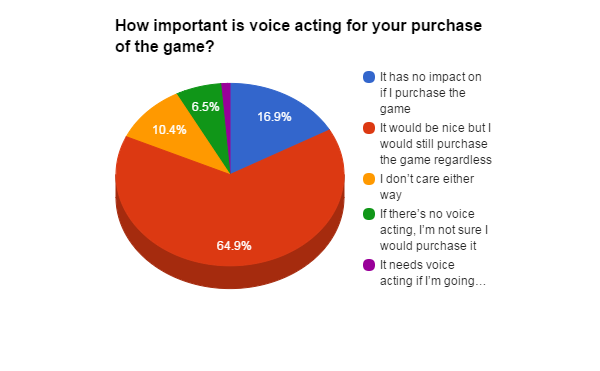 Our team felt strongly about this topic from inception. Voice acting would add a lot if done very well, but funding great talent would be difficult and bad voice acting would likely be worse than none at all. We were happy to see many fans will still be interested in our game if we didn’t have it. It has always been our intention to have this as a stretch goal, so look for this as a an option for our game on the next Kickstarter. 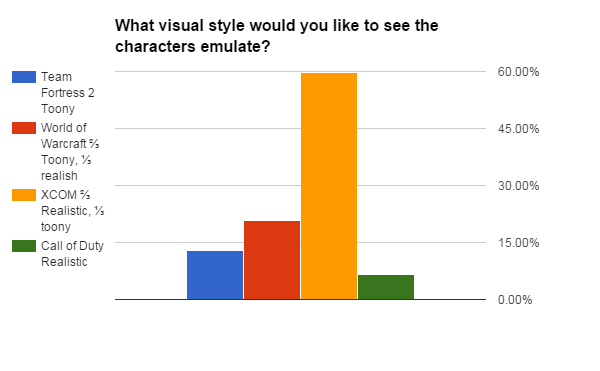 The most divisive aspect of our visual style was our characters. Some people liked them, while others viewed them as caricatures. The survey revealed the majority wanted to see stylized yet realistic looking characters, so we have begun the process of revamping our models a realistic feel which we also believe will better match our environments. 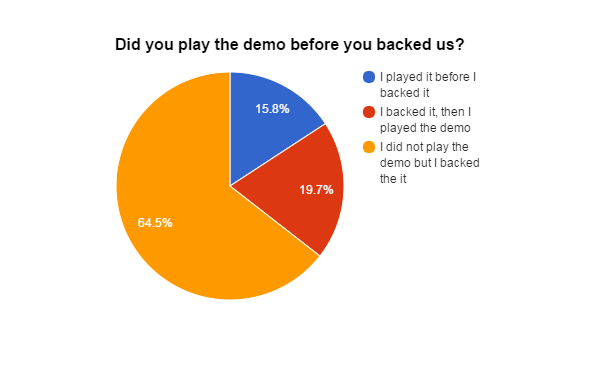 When we launched our campaign we were unsure how much impact a demo would have. Making a functional demo before funding is often difficult, time consuming, and dangerous from a marketing standpoint. However, the successes and failures of recent Kickstarter games has changed the market. We felt it important to convey we actually have a game and will carry it through to development. We do think the demo accomplished that goal.

While the existence of a demo may have been emotionally supportive, it was also clear the actual functionality of the demo had little impact on people’s decision to back our game. It appears the trailer and Kickstarter page were the greatest influence on our backers. Before launching another Kickstarter we will work to improve the current demo, shifting focus to the GUI and gameplay, but the primary focus will now shift to the overall presentation, such as better lighting, characters, and animations. 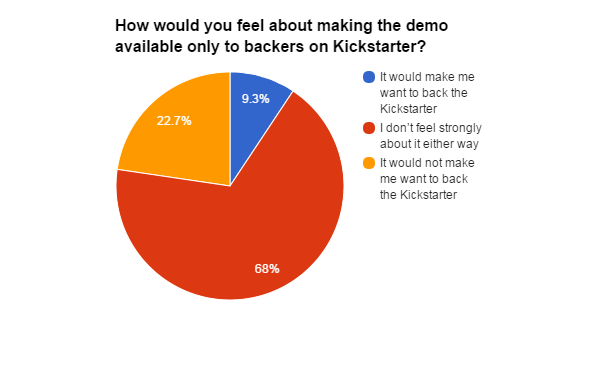 This question was the black sheep of the lot. We wanted to come up with unique and interesting ways to reward our backers at every level. We also think that if we can get more people to donate at the $1 tier, they will be more likely to increase their pledge later in the campaign or once they have had a chance to play the demo. We spoke with a marketing consultant who suggested making our next demo exclusive to backers, thus generating risk-free participation, because backers can rescind their pledge at any time.

Our fans held conflicting opinions on this point. Some people were excited about an exclusive demo for backers, others were turned off by an extra step required to test the game. Choosing the right path will be difficult, as shown by the data. On the graph preceding this one, we see most people backed the game without even playing the demo, and the next largest group backed it before playing the demo. A whopping 68% of fans didn’t feel strongly either way.

We learned a lot from our crowdfunding campaign and the survey we collected afterwards. We humbly thank all of our backers for the feedback we received, and want everyone to know we have continued working on improvements to the game and future crowdfunding efforts. In upcoming posts we’ll share the graphic and gameplay revisions and improvements we’ve made to Outland 17. If you’d like to stay informed about new updates to our game and process, make sure you join our mailing list!