After some feedback, we've put some love into the options screen. 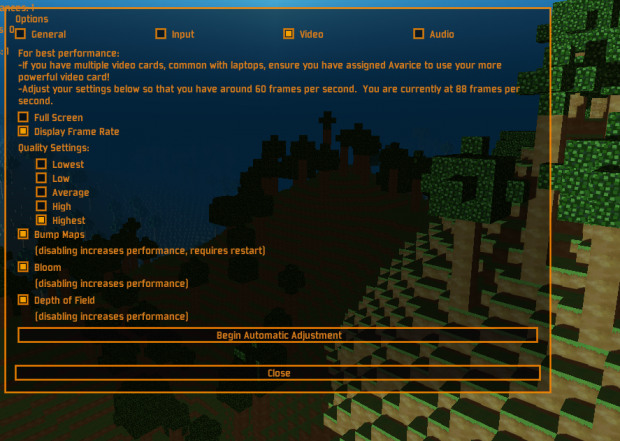 The last two days I have been reading some feedback, specifically that some young kids had reported some "lag" while playing. I have tested Avarice on literally hundreds of computers. The primary causes for graphical lag have been:
1. Wrong video card, for laptops with a "power saving" video card and a powerful video card.
2. Never thought to look at the settings.
3. Not full screen when in web player.

Number one is particularly tough for a number of reasons. For one, I never had seen a laptop with dual video cards before, haha. I had no clue such things even existed! I had one person showing me their low frame rate on their fancy Alienware laptop, out of about thirty people, where not a single other person had reported a problem. I had no clue why their laptop would have such troubles while lesser computers were not. Months later, he says he figured it out: his computer had not detected that Avarice was a game that "needed a the powerful video card."

Many months later, I actually bought myself a laptop, and... it has the same dual video card fun. Now I got to witness it by hand. And jeezus, it's annoying. It does not even detect my developing software as "needing the real video card." And it does not assume to use the "real video card" if I am plugged in either (that may make sense, another discussion for another time).

Long story short, all of the above issues usually need or should have the USER to do something. And we, as game developers, can ultimately only "nudge" the user to do things.

In the meantime, this is what I got:

Eventually, I can force the user to go through an auto-configure the first time the run the game. I can also make pop-up messages that tell the user to reduce their settings when they have a low frame rate. Maybe I'm just old school and assume it's the responsibility of the user to tweak... but times have changed, haven't they? What do you guys think?

All this pop-up stuff reminds me of this video: Youtube.com with the annoying pop-ups :-P.

I wrote a lot more than I expected, haha. Enjoy :-P.

Learn more about Avarice, and play the demo, at Zooptek.net!