Welcome to our monthly update post! Here you'll find a video showcasing our progress on The Pedestrian, as well as, an article version of the update.

Welcome to Spring! We are here with another Pedestrian monthly update! Giving you a behind-the-scenes look into where we’re at in production. This month we worked on optimizations, area colors, story, and more.

Hot new update video for you to get your eyes and ears on. It contains all the same info as the text version of the update. Watch or read, you won’t miss out on anything either way.

Our save system is complete! Well, besides implementing auto-save. But everything else is all ready to go! What is saved is actually extremely small. It’s just an area code, the puzzle’s name, and a number that represents the current state of the area. So for example, if I quit the game in the puzzle ‘Thrice,’ after completing two other puzzles in that area your save file will look like this: 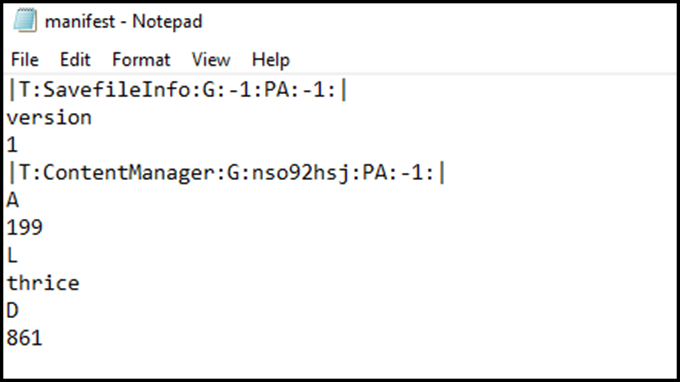 Pretty neat huh. Let me run you through it. The first 4 lines are just labels for the file itself. The A line is the label for the ‘A’rea code, which for the downtown is 199 (shhh don’t tell anyone.) L is for ‘L’evel name, in this case is thrice. And D is the area ‘D’ata, which I won’t go into how it’s calculated to be 861, but let’s just say it states that you’ve completed everything up to the downtown hub and beat 2 of the levels there.

Continuing our journey of optimizing the game. Jed’s been going through the project with a mop and cleaning up excessive garbage production, texture resolution, and draw calls. We’ve been pretty satisfied with the improvements so far, but we still have more we can do to improve it further.

More progress has gone into The Pedestrian music and I gotta say, it’s sounding pretty dope. Here’s an exclusive sneak peak at a track that’ll be playing in the Subway.

Check it out on Soundcloud

It started to become a hassle to navigate our dozens of scenes. So we added in a little tool to our editor so that different areas could be loaded quickly. While this might not seem overly beneficial, when you’re switching between areas 40+ times a day, grabbing the half dozen scenes that make up an area every time is a little tedious. But no more we say, now with just one click we can open and close all the scenes we need!

Last of our In-person Playthroughs -

We had our last in-person playthrough earlier this month and it went extremely smoothly with minimal hiccups. We still had 30 or so tasks added to our list, which is fine because they are all more polish type tasks and not the larger scale issues of past playthroughs. So it’s exciting to see our refinements making the playthroughs smoother.

We’ve begun the color and lighting pass that was briefly mentioned in the last update. The pass starts similar to the other passes we’ve done, screenshots are taken of various areas in the game and then edited in Photoshop to how we want it to look. We then edit our light values, post processing effects, and baking settings to match the Photoshop edits. We see great value using color not only to make things pretty, but also as a storytelling technique. Check out Daniel’s awesome video where he explains how color is used in film and games.

In The Pedestrian we have this design rule where everything is a part of the world. From tutorials to story to options menus, everything is placed into the environments. This month we added and moved around TVs that hold the options menus. These are scattered around so that no matter where the player is in the game, there will be a TV options menu nearby.

We ran through the game and made improvements to all the in-sign platforming elements. Meaning we made tweaks like giving a jump more head space, adding in some challenge to boring signs, and removing annoying toe stubbing parts. Everything with the purpose of making the gameplay flow smoother between and inside of puzzles.

We’ve added in numerous elements into our environments that hint towards our story. Like our other design decision, the story is meant to be non-intrusive. You’ll be exposed to elements of it throughout your playthrough but it’s up to you to put them all together. And if you’re not into connecting the dots, then that’s OK too! We won’t make you skim walls of text or skip cutscenes, it’ll all just happen in the background and you might not even notice it.

Here’s our monthly progress graph! It shows the state of each of our areas as well as the progress since our last update. Most of the work this month was on non area specific tasks, which does not translate well into the Area Progress graph. So while single areas didn’t receive as much of boost, the game as a whole has improved greatly. 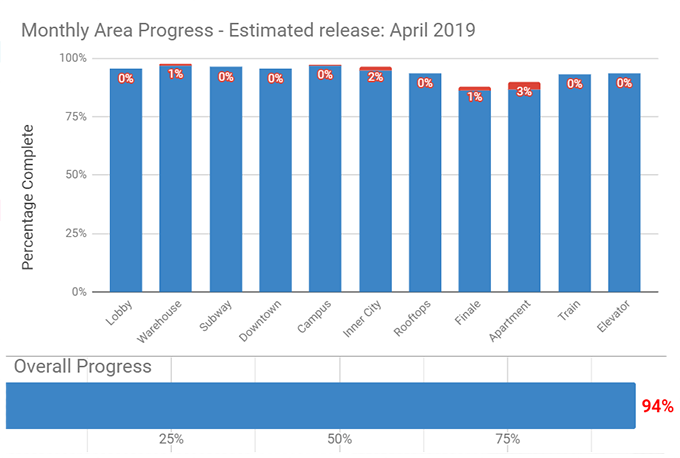 You can find the complete list of finished tasks over at our Google Drive spreadsheet.

Here we are at the end! We are really happy with this month’s progress. It has been so nice to hit a couple milestones like female animations, finishing the save system, and completing the last in-person playthrough session. So what’s next? Well, we have to finish the color and lighting pass, continue adding story elements, and finalize the beginning and ending sequences. We’ll keep pushing towards completion and you all keep being you. Thanks so much!