This articles covers research and discussion regarding statistics that describe reality in games. It shows some basic concepts, how rpg system can be designed. 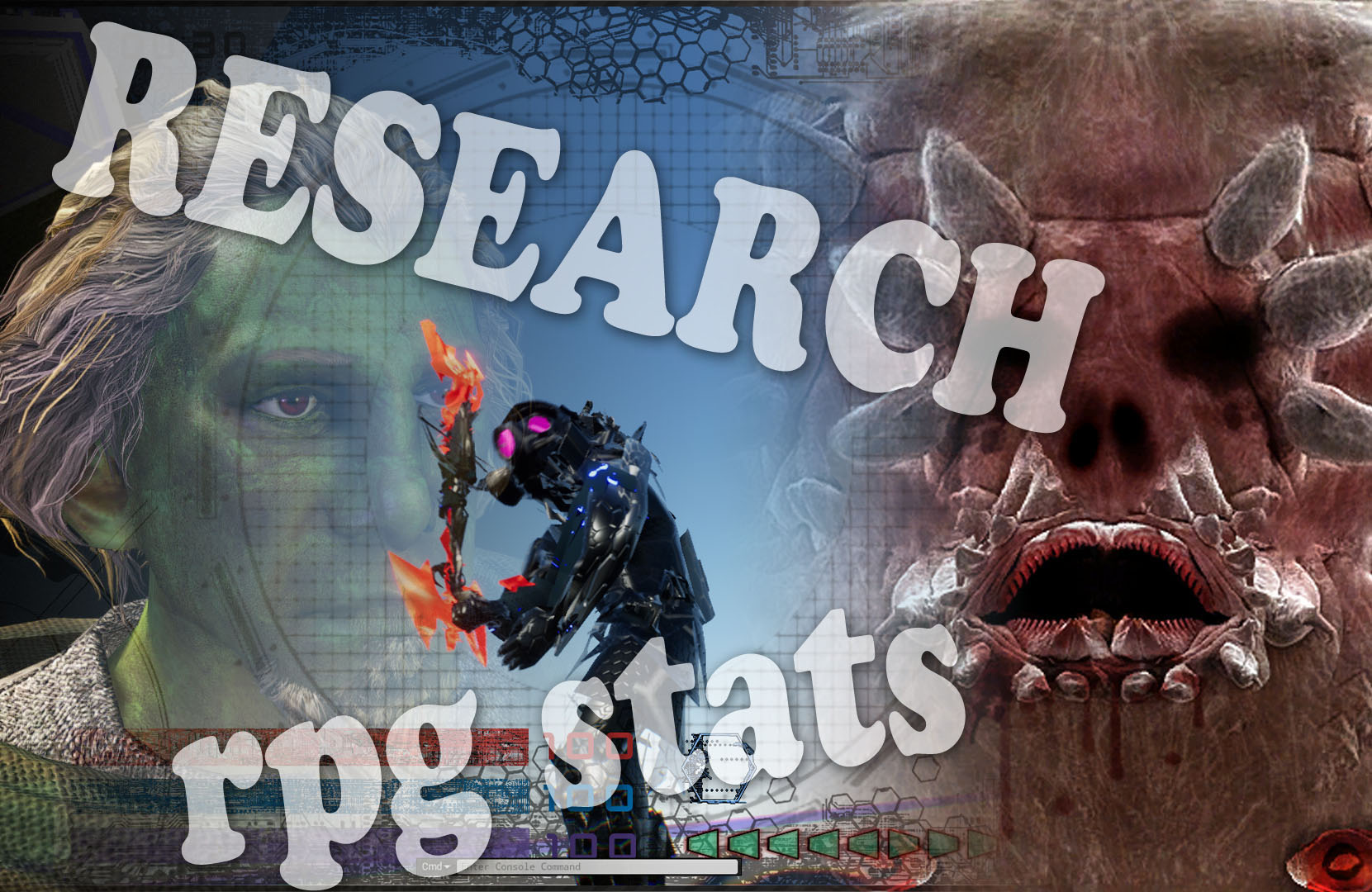 This articles covers research and discussion regarding statistics that describe reality in games. It shows some basic concepts, how rpg system can be designed.

There is unsolved (?) question: Can you describe Holy Mary by using X Y Z's? This question refers in metaphorical sense - should we include metaphysical world in RPG system.

I believe that answer should be positive for many reasons, but these two should be *enough* :

In Paradigm Worlds some creatures believe in magic, some other suggest that this is just a technology that hasn't been properly understood. Existence of 'magic' is accepted, but it is simulated by same stats that refer to hi-tech technological energy weapons.

That allows us to make first proposition.

Let us start from a triangle. Let golden triangle be our inspiration here, as a sort of compromise. Can we agree that we could be described by such manner? See the picture: 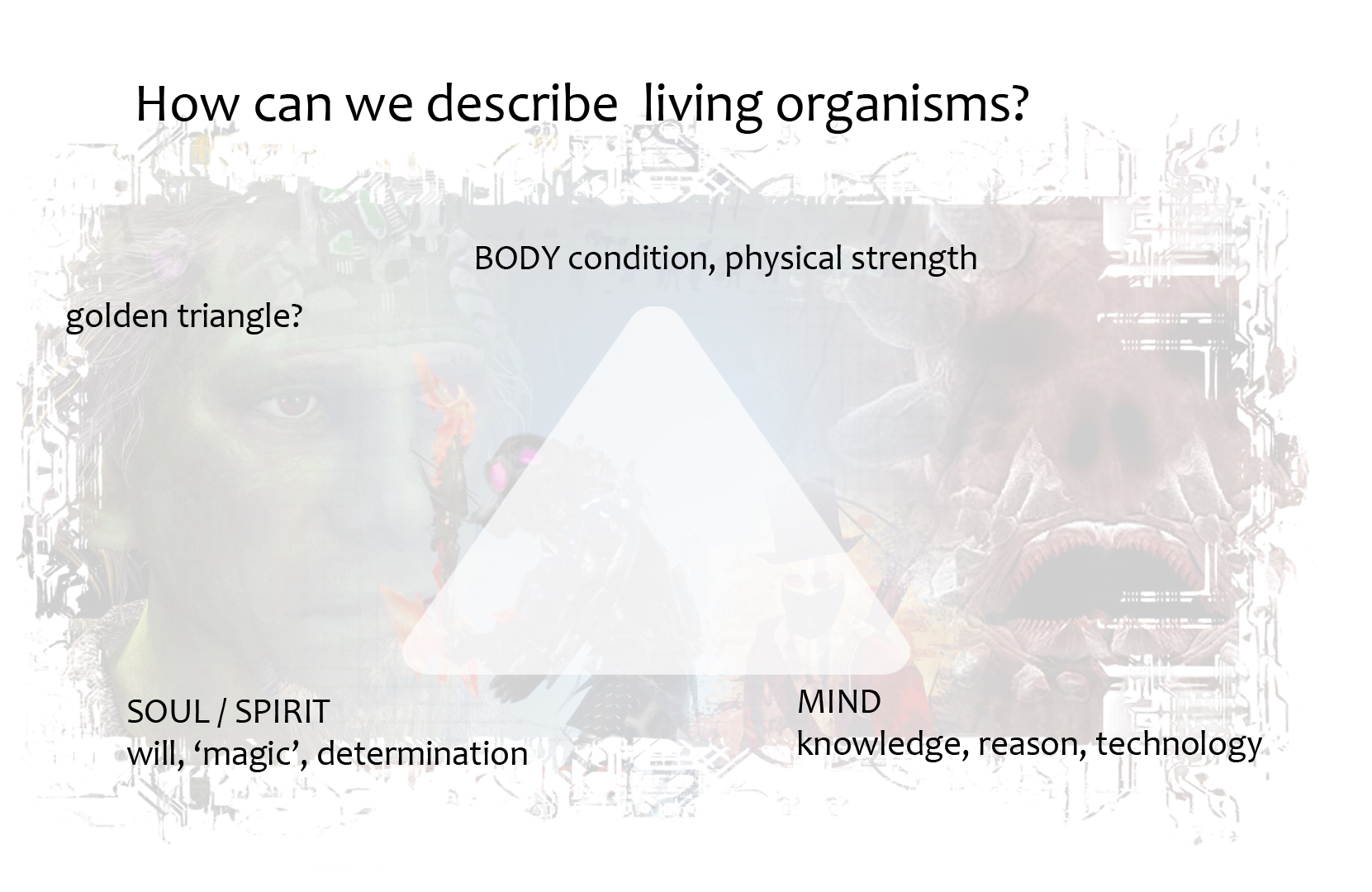 That is general idea for now.

But there is another challenge. System has to be flexible enough to describe any creature. But naturally in a way that it couldn't be mistaken by any other. Distinct individuality. 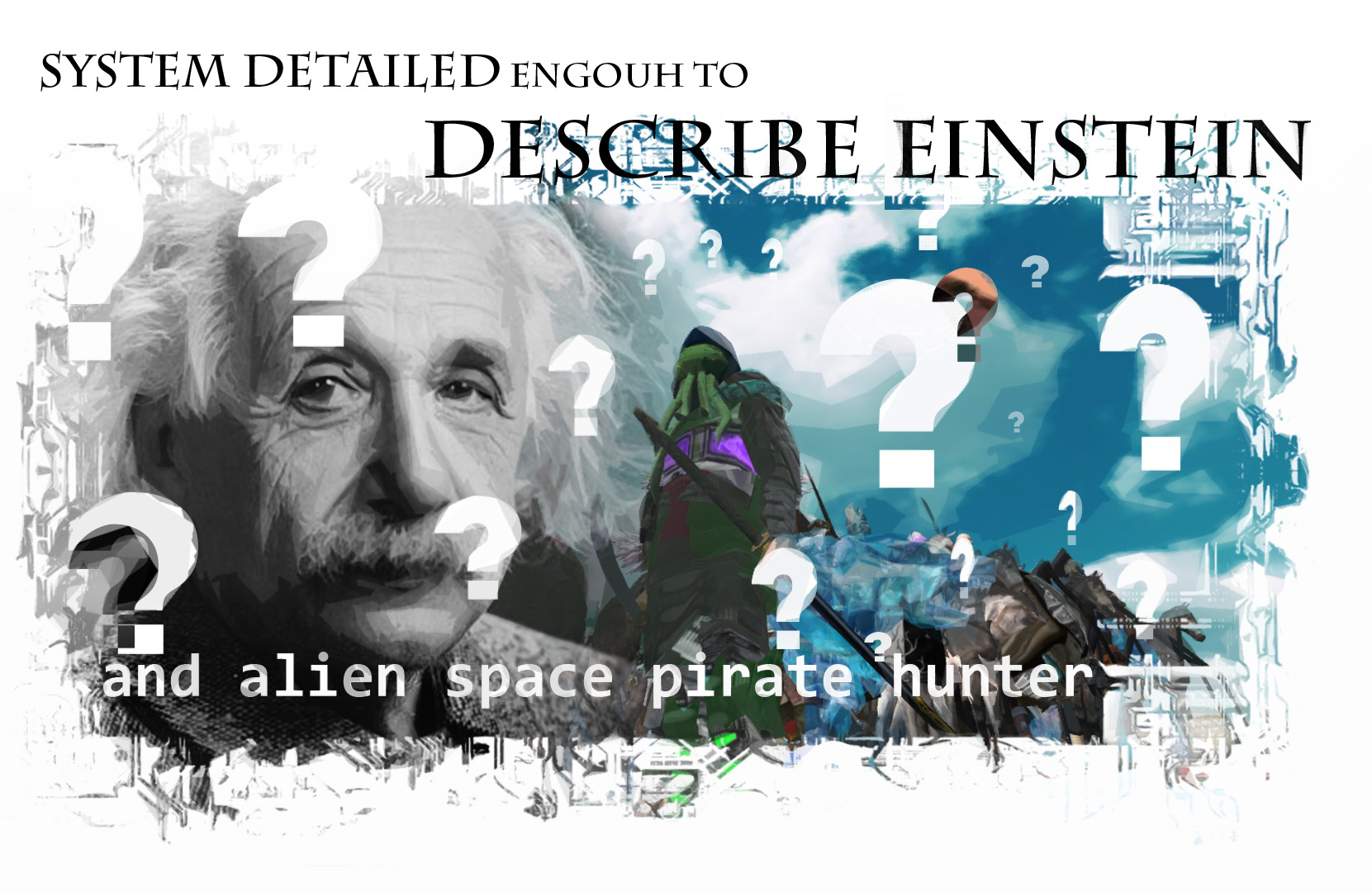 In such case, our golden triangle may be a sort of road sign, but does not solve problem.

That let us go back, to first challenge - make it flexible enough to be played as tabletop without dice. Actually this limitation is very inspiring.

First: such a simple system doesn't have to be 100% accurate.

Second: Game Master's role in that matter is crucial. He has to adapt story, no to INTERPRET and translate to an rpg 'language'.

Third: Designing 'tabletop' system may lead us to interesting - out of box - conclusions

Let us think about that:

Idea - use system of traits or #tags.

Player character and all creatures could be described by system of #tags. Eventually 2-3 levels of traits/tags like - basic->advanced->master 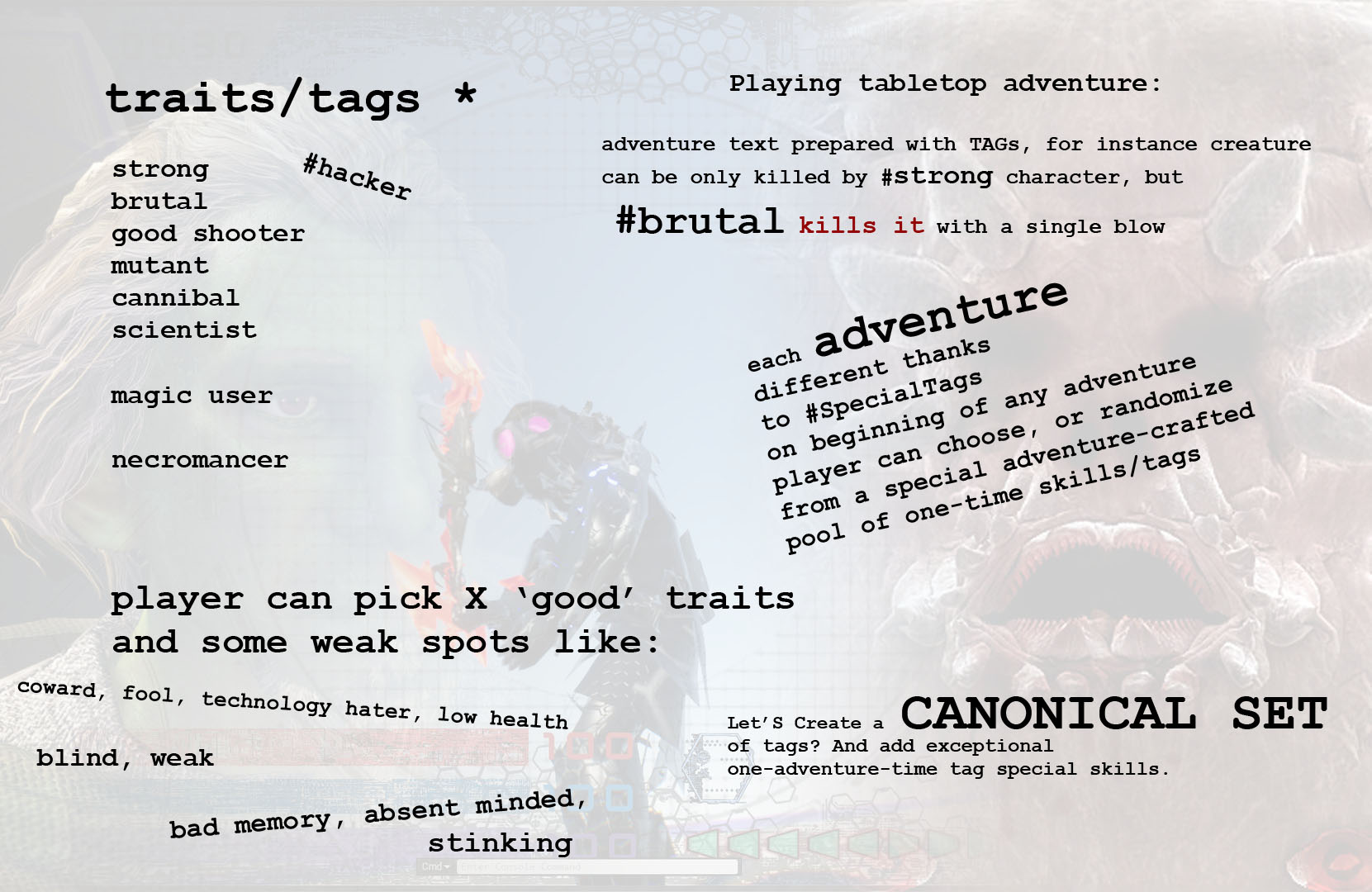 After some time I think there is a way to categorize these tags into some logical way, and set some basic rules for TT no-dice RPG System.

What else needs to be done: 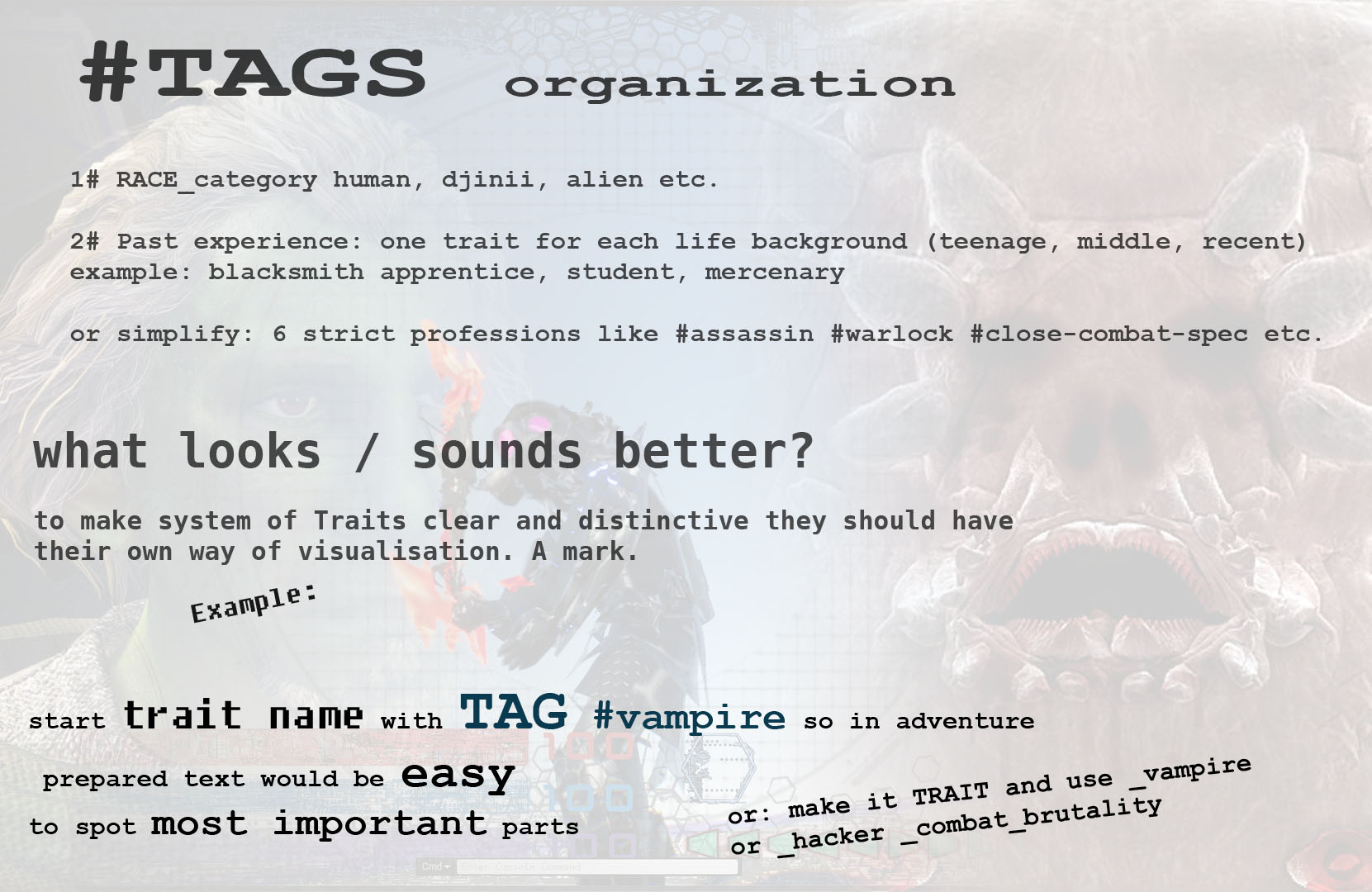 We can design some first basic rules...

Next level: there is a list of 12-30 #TAGS organized by triangle categories:

Good, but what _traits or #tags should be available, so we could build our Einstein and Space Pirate with same system?

Well, I think it is still kind of open question, however I have my ideas. If You think of something interesting, let me know here in comments.

Start with that. To create any surface in geometry, we need at least 3 points, let us give at 5 tag points to beginner at 0 level.

After successful adventure, or thanks to events in adventure player can gain more #tag points and 'buy' new traits. Actually, some adventures may be designed in that way that player has to pick some special trait.

Traits / Tags - can have 3 levels of advancement - basic cost 1 point - advanced cost 2 points - master cost 4 points OR SIMPLER SYSTEM: where there is only ADVANCED AND MASTER level. Cooler and more hmm minimalistic.

or one-time-adventure #traits. Each adventure can have special traits that are mandatory. They can be very much different. For example:

#marked by main evil enemy - GM has to choose the strongest (most powerful) player character and secretly (not telling to a player) harass him during whole time, trying to bleed him out emotionally or physically

#seer - player is affected by visions, he can see some events from afar but it triggers in least favored situations, eg during battle

#genial physicist mind - probably it is cheap to distinguish Einstein like that, by 'special' trait and not regular set, but that is just a one of many solution that are discussed.

should attributes be tagged, and if yes, which ones? For instance we could describe player character by a couple of attributes like condition, agility, intelligence, and... presence. Or... these attributes should be distilled into more diverse traits/tags.

Instead of intelligence at normal, advanced and master level, re-create that in for of other traits like hacking, reflex, controlling hi-tech equipment, and so on.

LET US TRY TO SUMMARIZE

If there is anyone who has better idea than #tags system I will be delighted to hear other suggestions. But, to finish project, one has to make decision, and choose between some options.

Asking questions is good, when it leads to fruitful conclusions. This is - still just a prototype - of stat / #trait system. To check if it could work visually I have decided to picture it in form of Character Page.

BACKGROUND 1 single slot working like super power: #former space pirate, should have all energy test passed, or should automatically recognize all advanced technology, etc. other backgrounds examples: #a guard in the hospital for the insane creatures, #A fake magic artifact seller, #a non-human rights defender

optionally: player should have a right to play one time a special adventure that would allow him to uncover some secrets from past and in result 'open' 2nd BACKGROUND slot.

Sneak peak from New Paradigm project. It is prototyped on a new idea. New Paradigm discovers new material 'fibre'. FIBRE material is 2-dimensional at cannot be normally used or operated. It needs to be controlled by best possible computer available, which is creature's mind. Idea is that there are special helmets that can transfer fibre power into special powers, like slowing time. Fibre allows bending reality on short distances and transforming rules to Euklidean mathematics rules, which may cause time/space distortions, anomalies, telekinesis etc.

What is important this new feature is based on mind opposite to soul which represents magic. As FIBRE need creatures power of mind to make necessary calculations, egg-heads have now 'their' magic. And power of that magic is regulated by MIND - variable.

I think this feature is worth mentioning.

Weapon - weapons have only one 'trait' damage. Each point lowers health state by relevant amount. For example laser gun with damage 2 lowers health from #scratched to #severe wounds in one shot. Not every weapon can be equipped, creature has to 'know' how to use it.

maybe there should be traits specially for weapons like:

Some additional ideas for rules:

RACE traits should be possible to upgrade to for double amount of points (4 adv, 8 master) but they should some general good bonus. For instance - advanced cannot be killed or put down by a single shot/blow, while master allows to take minus one damage from any enemy hit.

Master / advanced level in #race can give access to some prestige traits. Prestige traits have only one level and they cost 5 points. For example:

#BARBARIAN - damage of all range attacks (including magical/fibre) is reduced by one, all close combat attacks deal double damage [REQUIRES: RACE MASTER LEVEL]

this is research page for OPEN RPG System based on Paradigm World. Idea is still in early stage of development. In time there will be created special page/article for hard-coded rules dedicated to non-dice rpg system.

Feel free to post comments, or give advice. Also if you know about other interesting solutions, please let me know.

Let me finish for now with this prototype proposal of character screen: 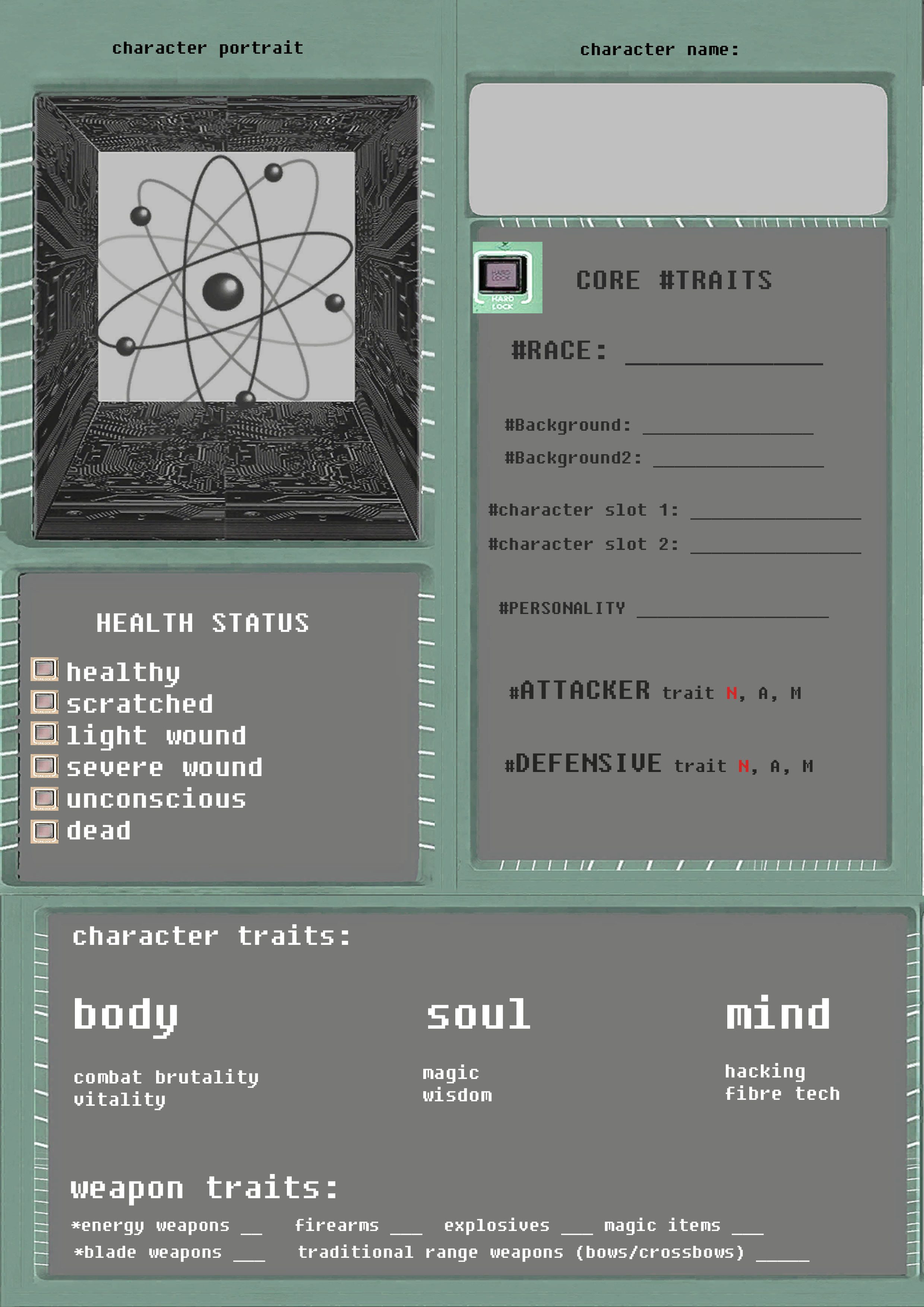 This article is a part of: