Announcing the launch date of our Kickstarter campaign and the name of the newest member of Elyn Studio.

After announcing a touch prematurely a few weeks ago, we're excited to now be shouting:

"Omnis - The Erias Line is coming to Kickstarter on August 24th!"

The original delay was the result of a last-minute rethink and gives us a little extra time to work on promoting the game and the Kickstarter campaign. Several meetings held on Google Hangout, reams of feverishly scribbled notes and daring flirtations with a caffeine-coma later, we've got a solid plan for the project's PR in place.

If you're a fan of JRPGs and you're looking for something built on the principles of new ideas and an unflinching focus on story, please help to spread the word! We're really proud of the project so far and we're extremely excited by its ambitions moving forward - but 90% of the struggle is exposure, so every smidgeon of support is invaluable.

This is a question usually answered on the campaign page itself, but I thought it'd be good to outline our thinking.

Since work began on the demo, the project has been a labour of love. I (Stephen, lead designer) put the entirety of my savings into its full-time development. While a lot of that time admittedly covered my steep learning curve, I've nonetheless put Omnis first and committed myself wholeheartedly to its making. The demo (download available here) is, however, simply a proof of concept and we cannot realise this game's full potential and achieve the full degree of scale and scope we have planned without support.

We're heading to Kickstarter to raise the funds we need to see this through to completion; to support the team through development and to cover commission fees for all of the talented individuals involved. Our pledge tiers and backer rewards have all been carefully planned and budgeted for. Our sums have all be rigorously checked, tested, scrutinised and reworked with the aim of ensuring that we ask only for the essential amount we need - something we take very seriously.

As part of our presentation, I've been working on some gif-icons for the project's pledge rewards. They're in draft form at the moment, but here are a few choice samples:

The idea of finally launching is in equal parts exciting and terrifying - to such extremes that they're strangely difficult to tell apart. I'll say for myself: I often can't tell if I'm trembling because of intense anticipation or because my insides are gyrating themselves into a fear-smoothie (apologies for the image). I'm confident that we've got a compelling story and an immersive world in store and that our pledge rewards are intriguing and top-quality.

A link to the campaign page will be up nearer to the launch date, but for now you can lend us a nod of support by following us on twitter (@TheEriasLine) or liking us on Facebook. Our official site (www.eriasline.com) is currently undergoing a little cosmetic surgery, but it'll be back soon!

In other news, we're ecstatic to be announcing the newest member of Elyn Studio: Oksana Kharitonova.

After a long search and an overwhelming array of talent in the artists who applied for the role, we're delighted to have Oksana on-board as the resident character-artist for Omnis.

(check out her deviantart here)

We'll have samples of her work on the project to show soon, but for now here's the rough sample painting of Nadime that she provided with her application (shown with her permission), in order to give you folks an idea of what she's bringing to the game: 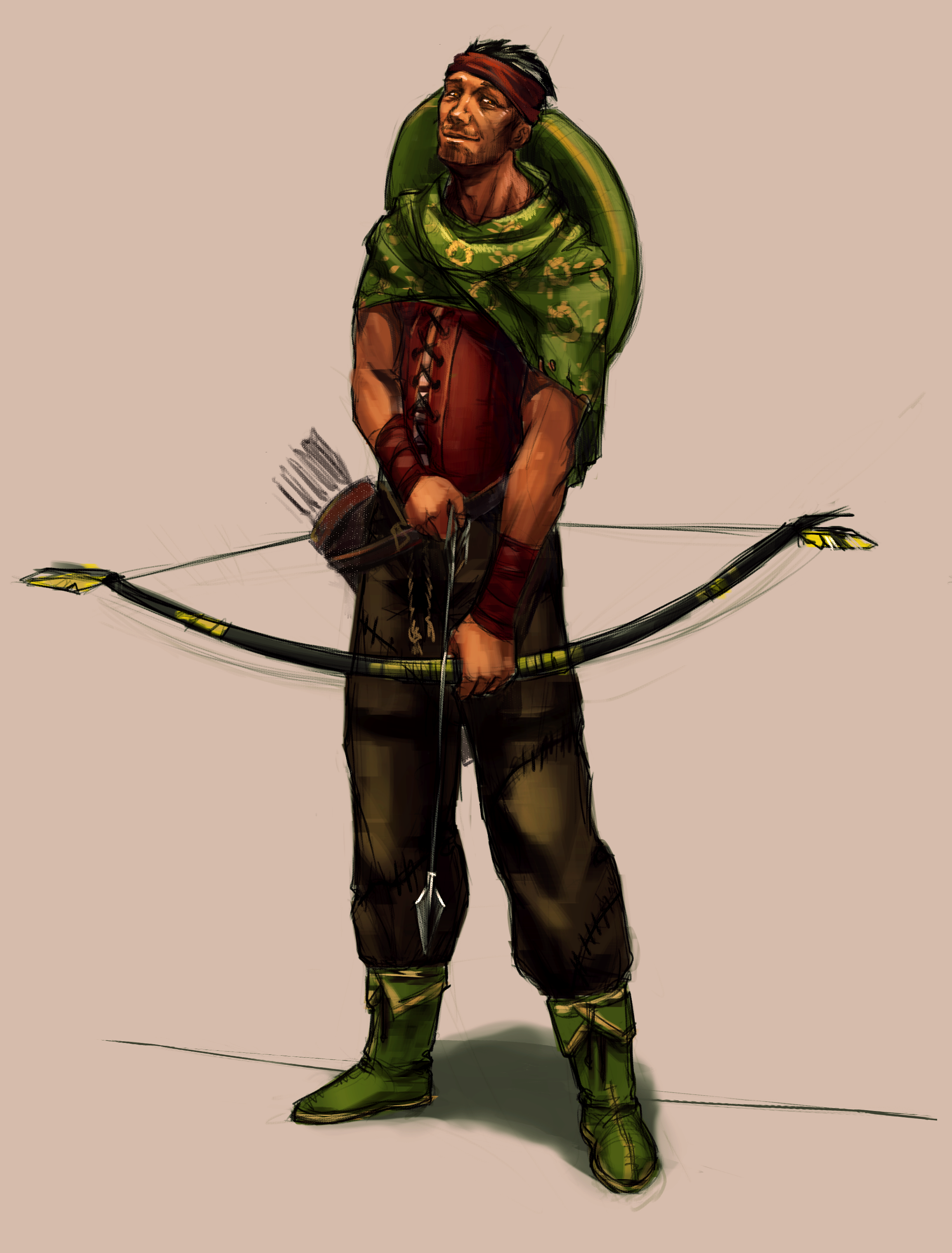 For comparison, here's the old version that I did myself to act as a placeholder while we were hunting out an artist with actual talent and some actual style (you'll see that I can draw - but nowhere near well enough). Oksana's painting of Nadime (above) was just a very loose sample and it's already a colossal improvement on my attempt, which I'm only a little bit embarrassed to show:

Oksana will be creating in-game avatars for each of the characters as well as busts and full-body portraits and the idea of seeing them and working with them in the development process gives me visceral tingles.

That's all for now ladies and gents, updates to follow!