A few words about the game itself and its current development status.

This game is my first experiment as a game developer.
At start I even could not imagine what kind of game it will be.

Implementing minecraft-like maps looks like a simple task at the start: rendering axis-aligned cube and calculating collisions for it are much simpler than doing same with custom geometries.

First experiment was successful: 32x32x32 scene was rendered using LWJGL. I have added light calculations for sun and torches, tried importing .obj models. Then I tried to increase scene size. And that was the end for initial version. 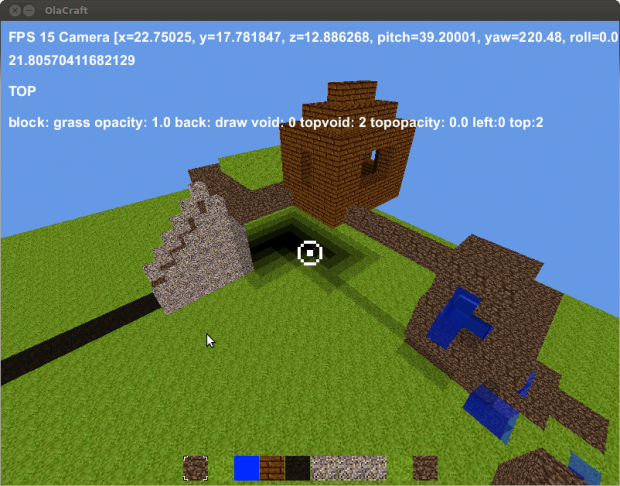 I started looking at different engines to choose from (versions from 0.1.1 up to 0.1.4) and finally ended with JOGL. It took a lot of time just to correctly setup camera for a first time, but i still think that was good decision. All source code was rewritten multiple times and now i have engine capable of rendering radius of 128 blocks withing 5ms on my machine. This is about 200fps in average. More modern PCs shows about 500fps and less powerful laptop did 80fps.

0.1.7 Performance: (note: on this screenshot lags was caused by eclipse IDE) 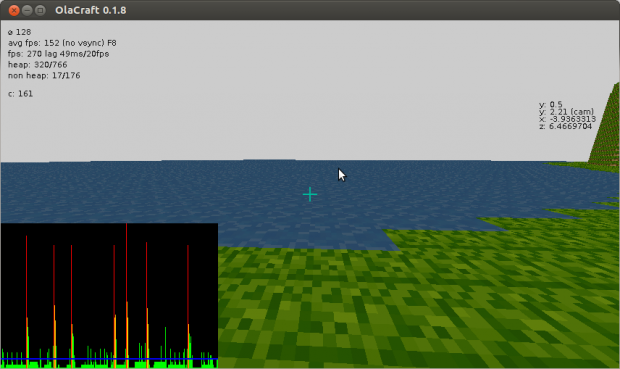 By the way i did some tries to import and render PMD models, bring bullets to engine, was experimenting a lot with all features of engine.

Complex terrain
I still not sure if i will use this feature (everybody will say that it "looks like minecraft" XD), but i'm trying to make terrain that will look interesting. I also have another idea about map generation to avoid comparison with MC, but that is for another article.

PMD models
Player models is another game aspect. You don't need them for a single player FPS game, but i was developing multiplayer from the start. PMD models comes from Miku-Miku Dance (MMD) software, able to make nice motions of anime-styled models for a dance videos. You can find this videos by searching MMD word on youtube, nicovideo or another video hosting. This models have bones for all you can imagine (fingers, eyes, skirt etc). So it's possible to make even good-looking cloth animation for a little cost of performance. At the moment i still have some unfinished work with materials, sphere textures, face animation and have a little performance issue. More or less finished animation of walking and jumping (see the final video).

Gameplay
Nothing is implemented yet worth to show, just a lot of ideas.

Final word
Olacraft is a codename. I have no idea what name it will take at release.
Even this is an experiment, I am trying to make unique, fast paced and enjoyable shooter.
A lot of work is still waits for me, but i'm not afraid :).

so, its basicly another minecraft clone?

I expected to see this. Yes, it started as clone (i even made a same-looking inventory). It will take a lot of time, but it will not be a clone at some point. Not even close to.

I like the ideas of minecraft (infinite random worlds, building ability etc). So i started from copying this. From this point i'll add new features and will erase similarity step by step.

Another clone candidate is Quake. I'm trying to implement similar movement abilities (like strafe-jumping bug). That makes this game candidate to be clone of Doom III, Half-Life, Counter-Strike etc XD.

Don't worry about it too much. Most games are clones from another game, or 'borrow' game mechanics.

For minecraft-based clones this questions are more expected because cubic worlds are simpler recognized than custom shaped (BSP trees at quake/hl/doom) even with different textures. So they expect to see the similar gameplay.

Minecraft was inspired and borrowed ideas from another game itself.

I know how the whole cloning things feels. My project started off as a Sonic fangame, but has steadily been evolving into its own unique thing, and now we're completely indie. I wish you luck molding this project into something original!