The latest changes in the latest version of Okhlos, right here in our devblog

Hi, everyone! It’s been a while since the last update but, as a testament of all the work we’ve been putting into the game, we bring you a new changelog! Yes, another list of amazing features and the like that are now in the current build. The bad news are that, although I know how much everyone loves endless lists and walls of text, I will have to keep this one short because we are already deep into the following version. So, without further ado here is the list of changes in version 0.7.1!

I don’t want to spoil much but we’ve added 24 new heroes to the game, and some I dare say are pretty cool like Circe (who turns enemies into pigs) or Tithonus (cursed with eternal life but not eternal youth) and they also include a few cameos from some our favorite games.
Hero Unlock System

This has been the largest change in the version. You can no longer buy persistent heroes or philosopher heroes. Instead, each of them now has an associated condition that you have to meet in order to unlock them (kill 50 harpies, reach Sparta without buying kings, get your defense modifier to 300%, etc). Once you do, you can recruit them in the Agora, selecting them via a new menu, but you will only be able to bring a limited number of them each run. So far it seems, it seems quite a lot of fun! Gotta unlock em all! 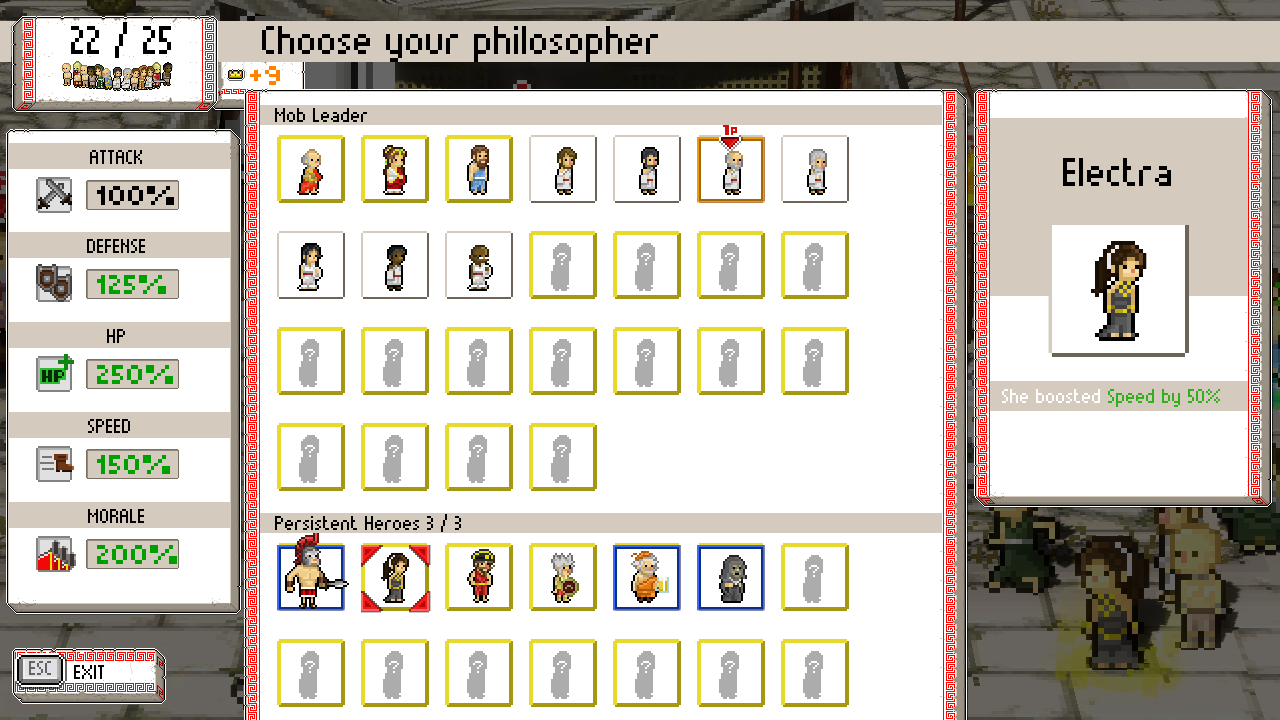 We’ve reviewing and working on all the god’s battles. Some of them have improved significantly (like Hephaestus), others may still need a little tweaking, but I think we’ve made progress with all of them. The next step will be doing the same for the rest of the enemies (which is kind of what we are doing right now), but I am getting ahead of myself.

A Unique Theme in every World

Gordon has finished the tracks for each of the different levels and they are all in the game! Music lovers rejoice! Next up: tons of new sfx!
Visual fxs in Lemnos

Once again, we are treading into spoiler territory here, but let me just say that for a while now we’ve been working on special levels that trigger very rarely and add have something different about them that changes the pace of a regular run. We already some of them working but they were almost an easter egg, now we’ve made official. A new bunch of them have been added (which, again, I don’t want to spoil), and now when you do find one you will have Homer to guide you and hint you about what is going on.

And that’s about it for version 0.7.1. Lots of minor additions, tweaking and improvements, but as I said, there is no time for that now. However, besides all the wonders and amazement of the changelog, we have some very exciting piece of news to share: Next month, we will be showing Okhlos at the 5th edition of the Media Indie Exchange!

The showcase will be on March 14, at the IGN Headquarters, in San Francisco, where attendees will have the chance to play some Okhlos, as well as fine selection of other independent games. So if you are in the area, be sure to drop by! And if not, don’t worry because there may some streams going on that night too! Do you want any more info? Go right here: Mediaindieexchange.com

And with that I say adieu! Until next time!