This week, rather than focus on one single aspect of development, we’d like to give a brief overview of a few different things we’ve been working on. In particular, these will be our main character, some music, and a first look at our dynamic time of day system!

This week, rather than focus on one single aspect of development, we’d like to give a brief overview of a few different things we’ve been working on.

The first of these is a proper unveiling of the main character of Starshard – the quiet-but-confident Karin Orr, along with a related early sketch! 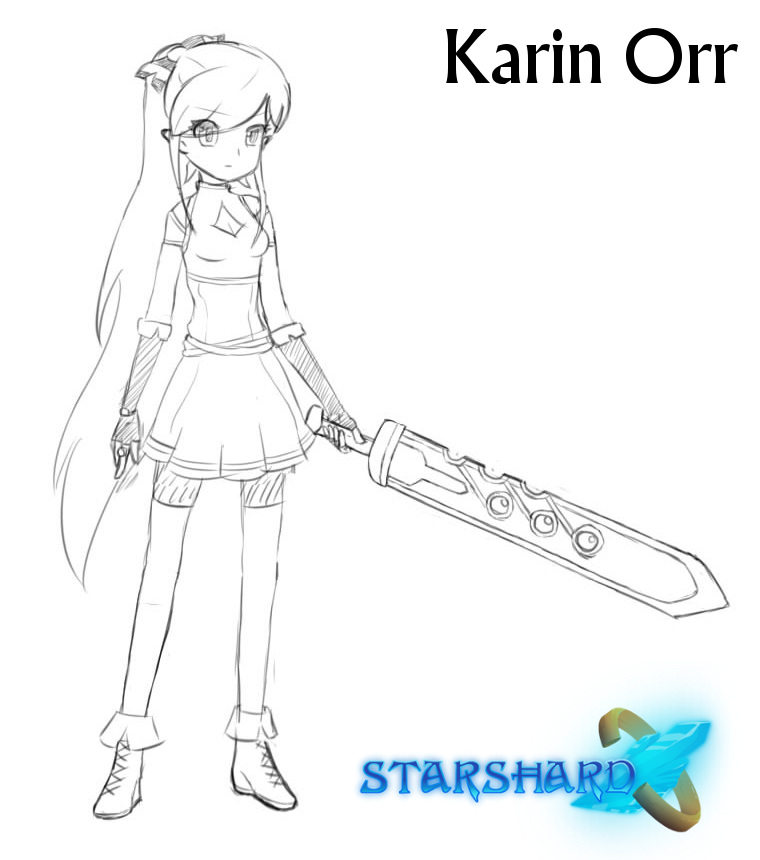 Thirteen years ago, Karin lost everything. Born in the magnificent city of Sky, situated on the neutral planet Echelia, she should have been granted a life of peace and prosperity together with her siblings. But the will of the universe had very different ideas; it was her father’s bloodline that eventually brought chaos to their door, casting her down into the depths of the city’s underworld at only five years of age. The Eldra – to whom blood holds more meaning than any other – do not always look favourably upon halves. Royal halves, such as she, were almost unprecedented.

Months passed in the darkened streets – taking with them her two siblings – before one arrived who could recognise the fire that had blossomed in her eyes.

Now eighteen, Karin flourishes under the wing of her master – Mathis – destined to take his place at the helm of a vast space colony within the coming years. Though her past has long been left behind her, she remains slow to trust. Yet to those she allows into her heart, she can be fiercely loyal. Mathis taught her many things over the years, from swordplay and invoking, to science, history, and the arts. As such, though she remains a quiet and often reserved individual, Karin harbours an unwavering confidence in her own abilities. Following in his footsteps, Karin aims to master the art of archaeology, joining him in seeking out lost technology amidst the countless husks of ancient civilisation scattered throughout the universe. Her chosen purpose in life: to better the futures of all races.

While we would not consider it to be the main theme of Starshard, ‘time’ certainly falls in amongst those we see at the forefront of the game. For this reason, the first track we’re unveiling in a draft state is Time’s Embrace, which you can hear below. This track was written with the cyclical nature of time in mind – the continuous repetition of the past making up a large chunk of its ostinati as time moves ever onwards.

To close, we’d like to give a look at what we’ve been working on this past week. Tying in with the overall theme of ‘time’ and our promise that Starshard would be a game featuring a dynamic passage of time and weather system, here’s a very shallow overview of what we have implemented to date! Below is a (sped up) gif depicting the passage of time over the course of a single day during a battle.

At this time, the number of hours in a day can be completely arbitrary, allowing for planets with any type of orbit. Day and night are designated by setting times for sunrise and sunset, leaving the system to calculate what sort of light levels should be achieved. This allows for fields in which daylight hours can be extremely long or extremely short in comparison to night which can lead to some interesting situations where certain worlds will never achieve full darkness or full light.

Of course, the diurnal cycle does not exist only for cosmetic reasons: The passage of time, along with the variance in darkness levels and weather changes, grant a variety of bonuses and penalties to units and monsters on the field. As an example, darkness levels in a particular area cause penalties to accuracy levels for most classes, in particular ranged classes. Nocturnal Therian genera, along with monsters, are granted general stat bonuses at night, while vampiric beings suffer penalties during the daytime. These are only a small sampling of the changes that can be brought into effect depending on the time of day – the mastery of which can help lead to a swift and decisive victory in battle!