New version of the client brings some great new features such as object and avatar spot animations and new object labels.

We're very excited to release this new version of the client that has some big changes. The biggest change is probably the most un-noticeable at first. Developers are now able to create and publish animated interactive products which will allow for a great range of new possibilities in the client. If you are a Developer and are interested in creating new Object and Avatar Spot animations head over to the Developer thread for the new editor or check out the Tutorial in the Knowledge Base.

The other great new feature are object labels for Sales Terminals, ATMs, Info Terminals and Gift Boxes. Stepping close enough to one of these objects will have a hovering label above it to better indicate that this object can be interacted with as well as what it's there for. Sales Terminals in Sunset Harbor have special labels to show what the the Sales Terminal contains. 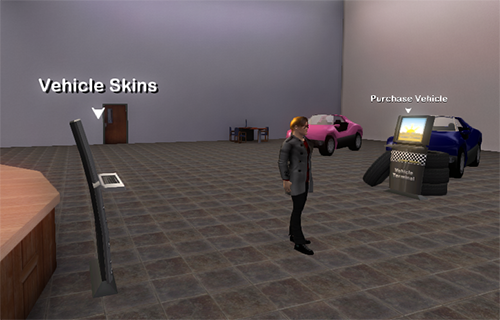 The labels will appear for retail object versions of the Sales Terminals, ATM's and Gift Boxes that are placed in your private and public locations. In a future release we will be allowing for these objects to be renamed so that you can have custom labels for your Sales Terminals and Gift Boxes.

- When approaching a Sales Terminal, ATM, Info Terminal or Gift Box a new floating label will appear over the object to better indicate it is something to be interacted with. In the case of Sunset Harbor Sales Terminals will have floating labels relevant to their content.