NOWHERE Alpha 32 is now available for players who are preordering / alphafunding the game. As usual, you'll find the new download on your account page. 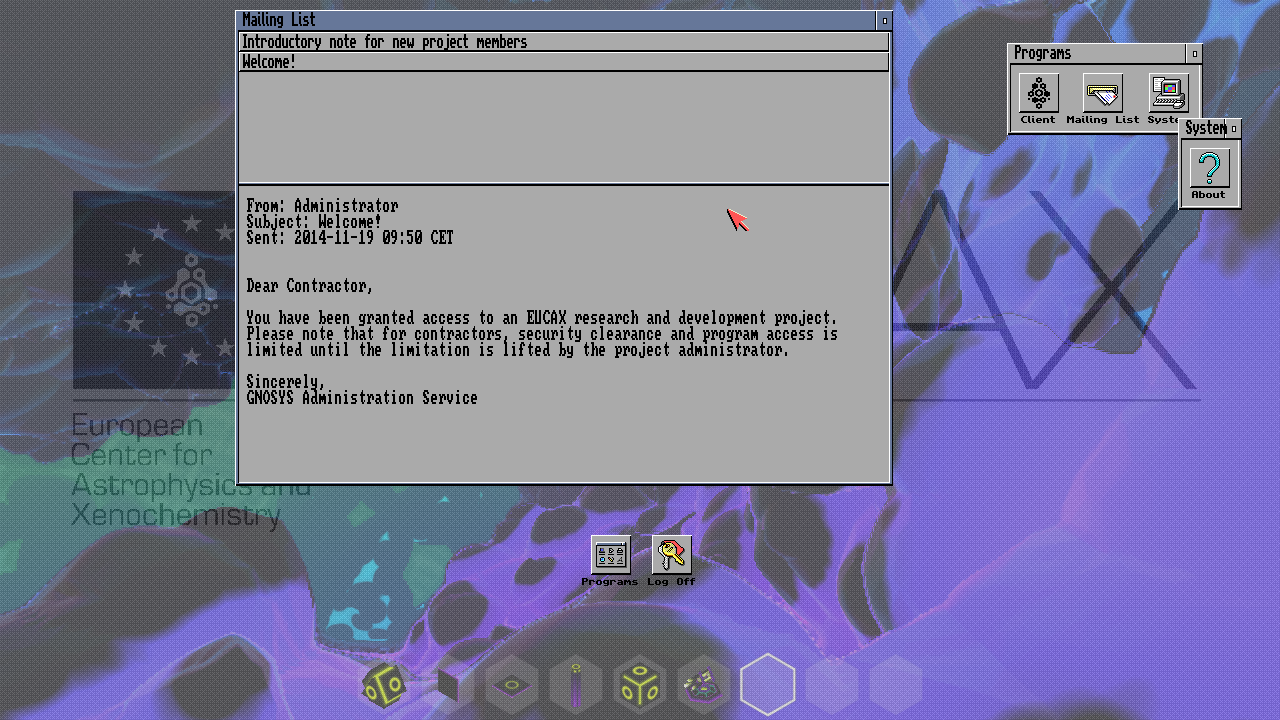 NOWHERE Alpha 32 is now available for players who are preordering / alphafunding the game. As usual, you'll find the new download on your account page.

Windows 32-bit and Linux builds are available. The OSX build will arrive soon.

- The menu has been replaced with an operating system from an alternate reality, called GNOSYS. The environment ties to the backstory of NOWHERE, which is now slowly finding its way into the game. In the OS, you launch the core part of the game through Programs -> Client. The Mailing List is going to be the place where we provide optional exposition for the game, where you gather bits and pieces from the discussions of scientists over their project's details. The system is going to be built out bit by bit over the course of NOWHERE's development, and will surely undergo more transformations. A few key elements are still missing.
- The gravitation vector in the test world has been changed to match a simple planetoid that is now hovering in the center. This way, the surface of the planet can be ceiling, wall, slope and abyss, and navigation is less nauseating ;-)
- Difficulties with rendering polygons on ATI graphics cards have been fixed thanks to @mmalex from Media Molecule, who sent us two Radeons for bugfixing (which I believe means no endorsement from their side, or implies that they have spare Radeons to give away. But I feel compelled to tell you to check out all their games, I'm pretty sure you already know at least one of them. ). If you still have problems with your Radeon, let us know.

- Windows 64-bit: Because of a problem with the JIT in PyPy, Nowhere crashes after a random running time between 10 seconds and 2 minutes. A batchfile "nowhere-win64.bat" is supplied to launch the game without JIT support, which slows down loading time, but preserves a relatively playable game.
- Linux: On dual monitor setups, the engine may not recognize the screen resolution correctly (a problem caused by SDL missing support for an X11 feature on Debian). Therefore, the launcher script explicitly starts the game in a 1280x720 window for now.
- Linux: The build is for 32-bit systems. Some 64-bit platforms do not provide 32-bit support libraries out of the box. 64-bit Ubuntu e.g. requires the ia32-libs package to be installed, which is part of the official repository.

- Exiting to the menu and re-starting the client will not work correctly.
- Post processing FX have been disabled because they grab the screen and therefore perform badly. They will be replaced with better, framebuffer-based implementations.
- Missing Feature: 3D sound. We use OpenAL but sounds are currently not attached to a location and will appear to emanate from the center of the screen.
- Missing Feature: fades. This needs to be done at some point ;-)
- Missing Feature: hud text. The inventory does currently not display item quantities.

- Work is now spent in driving the backstory forward and rearranging the gameplay around our new terrain techniques, starting with populating our space with the sentient swarm AI. The sentients are not hostile, but they inhabit the world, and interaction with them is a key element of the gameplay.