WELCOME TO OUR FIRST NOVEMBER UPDATE! In the wake of early Christmas decorations and the cold bite of winter in the Northern Hemisphere, we have come to you with a new update on recent events. Read on for some news on the following: The upcoming patch and update Mac/Linux release date The recently announced Sandbox mode and its Property Editor Your chance to vote for our Nugget Fashion Week winners

WELCOME TO OUR FIRST NOVEMBER UPDATE!

In the wake of early Christmas decorations and the cold bite of winter in the Northern Hemisphere, we have come to you with a new update on recent events. Read on for some news on the following:

The patch will include fixes for many of the bugs and issues that the community has found since the release of the pre-alpha, but will also include a few fixes and tweaks that the team had already started work on prior to the PA being released. These were primarily problems that simply couldn't be fixed in time, or were found directly after the current build was finalized.

The patch will also include numerous balance changes. The game should move at a slightly slower pace, with Nuggets not running off to mate so frequently and the growth rate of children lowered to a more normal speed. The overall slowdown and balancing should stabilize the gameplay and offer a less chaotic PA experience. Farming will also be partially implemented with most, but not all, of its features becoming active and usable. The level of implementation may change between now and when the update actually goes live.

The team has been hard at work, even before the pre-alpha’s release, fixing known issues and bugs. Once the community started submitting bug reports to the forums, the team’s focus was shifted over to higher-priority problems. This includes game-breaking bugs or those causing severe issues with game functionality, and they were dealt with first before returning to lower-priority issues like visual issues.

Each patch or update pushed will come with patch notes so you can see exactly what has been fixed, changed, and added.

SO WHEN IS THIS PATCH/UPDATE COMING?We want to ensure that the patch will not only come with many new features to test, but also be in a much more stable state. Our devsalso want to squash as many of these early bugs that you have all reported before pushing the next version. The first update is expected in Mid November. After that, patches should be released on a monthly basis.MAC AND LINUX LAUNCHER

The Mac release should show up within the next few days. The exact date is dependent on the success of the final tests. We will announce it as soon as it becomes available.

THE UNIVERSIM SANDBOX TOOLS
"How will I feel like a god?"

We see this question a lot. One way the team hopes to immerse you in the role is by letting you have full control over almost every aspect of your planet via Sandbox Tools.
With these tools, you'll be able to edit just about everything, from animal life and other available resources all the way up to the planet itself! You can even fine-tune how many trees are on your planet or how big a lake is, manage the mammoth herd sizes, and change the length of the seasons. You'll even be able to tweak research progression.
The Universim Sandbox Toolset will allow you to make the planet and all things on it uniquely your own.

While the Property Editor can edit many things, we will be focusing on the Nugget editor section today. Always remember, anything we showcase is likely to change down the road, so don’t expect it to look exactly like this in the final game.

In the Nugget Mating Property Editor Panel, you'll be able to change various attributes corresponding to Nugget mating and reproductive behaviors. Some property attributes are based on an average time duration, like how long a Nugget pair will converse or flirt before they head off to the hut. Another example is a percentage slider that changes the possibility for a pregnant Nugget to have twins. 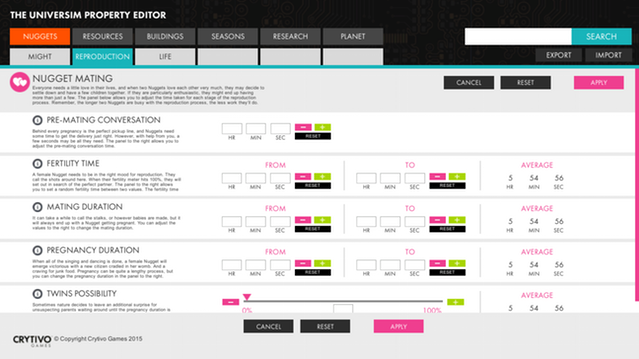 The Nugget Fashion Week Competition is drawing to a close, and we need you to vote for your favorite artwork! Head on over to the voting page for more details and to view the fantastic art we have received. Thank you to everyone who entered! You can all be proud of your work.

All the best,
The Crytivo Games Crew