The Ball developers return from Nordic Game with funding in hand.

Nordic Game was a fun time for our developers that went, especially since they came back with this:

Pictured above is the grant that The Ball was presented with from Nordic Game, which provides us with 250,000 DKK (~45,000 USD) in funding. It's also a huge boost to our team being recognized like this in front of our peers. The Nordic Game Program is funded through the Scandinavian governments and these grants are only awarded to a handful of companies a year. We're thankful and honored that we've been chosen. This money will go a long way in terms of helping us with the final months of development and marketing in the lead up to our release.

Of course, there were other things going on at Nordic Game as well. Sjoerd, and the two Markuses got to attend the various panels and a couple parties too. They even bumped into one of the great minds behind Epic. Here's what Sjoerd (Hourences) had to say about the event:

We had a great time at the Nordic Game Conference. It was a huge honor for us to be awarded a grant out of the 90-something applications they received! Going up on stage in a packed hall at Scandinavia's biggest game developers conference is an awesome experience. We talked to lots of people, attended a couple of presentations, and we even bumped into Mark Rein. 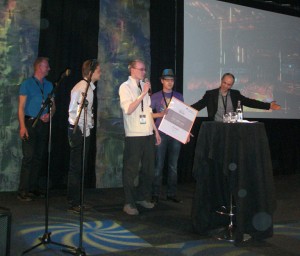 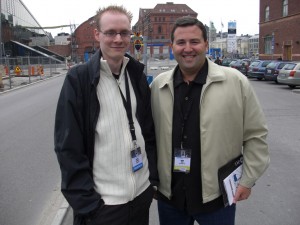 And since we promised you an update on the release date, we've set a timeline that lands us in the month of August. So there you have it, quite a bit narrowed down from the previous "Summer 2010" window and who knows, you just might see us pop up at some other events between now and then. Stay tuned.

Nice, guys! Wish i could have been the one to give you that money. You deserve it!

You can help support us when the game releases in August ;)

"The Nordic Game Program is funded through the Scandinavian governments"

Wow, the scandinavian countries do a lot to support indie developments like this, whether it be in music or game creation! Wish we had something like that in Germany!

Here, we have funding going into agriculture, etc. There are statistically as many artists in Germany, as there are people involved in agriculture. If our stuid government would just spend a fraction of what they blow into those dead industries on the arts, there would be a whole lot less artists with problems to survive in this rich country.

Congrats on being Swedish ;) ...and on this recognition!

congrats to the teotl studio

Lucky buggers :D. Congrats on it i bet you guys will spend it well.

you came on ut3 modding these ridiculously high quality things. It's no suprising you got moneys for it. Also, your unique non-fps gameplay is awesome. Just don't do only one style like everyone else does, you can do better. Also, watch out for manipulative publishers.