In this article we will cover some news about the development of The Destruction of the Nuclear Monsters, the new interactive tests we released, and to announce that the game will also be available on Linux.

This is just a short article with some interesting news. During the last few days, we have been working on several things, but let's start by wishing you all a Happy Valentine's Day. Remember to spread some love through all the people dear to you, and with everyone you meet! 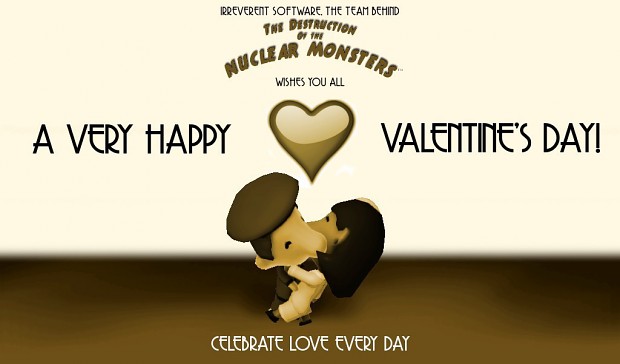 Now, with the news!

The Destruction of the Nuclear Monsters,

We are very proud to announce that our game is starting now the process of Steam Greenlight, right now as an early project. It will help us a lot to improve the game and to develop it if you can share it with your friends, give it a like, or give us your feedback.

But not only that. We also have prepared something special for all of you :

Today we released the first interactive demos for the game. It is a very small test made with the Alpha build of the game, letting you play with the giant monster Kelyphos, and destroy some buildings. Soon, we will be releasing more of such small tests, so you can get a teaser of what is to come in the full game. Your feedback is extremely important during this stage of development, so we ask you that if you download and play these demos, please take a moment to leave your comments about it. You can download them here

And this brings us to our third and final news :

is coming to Linux

After much testing and several builds, we are finally satisfied with the results we got in our Linux machine (Ubuntu 14.04), and with this success, we decided to officially develop and release the full game both in Windows and Linux. We are confident that this will help us reach even more players, and will help more people to enjoy the final game.

The look of the game, performance and features will be exactly the same across systems, so everyone can have the same experience.