Ahoi, it is done, the first version after ~5 years. 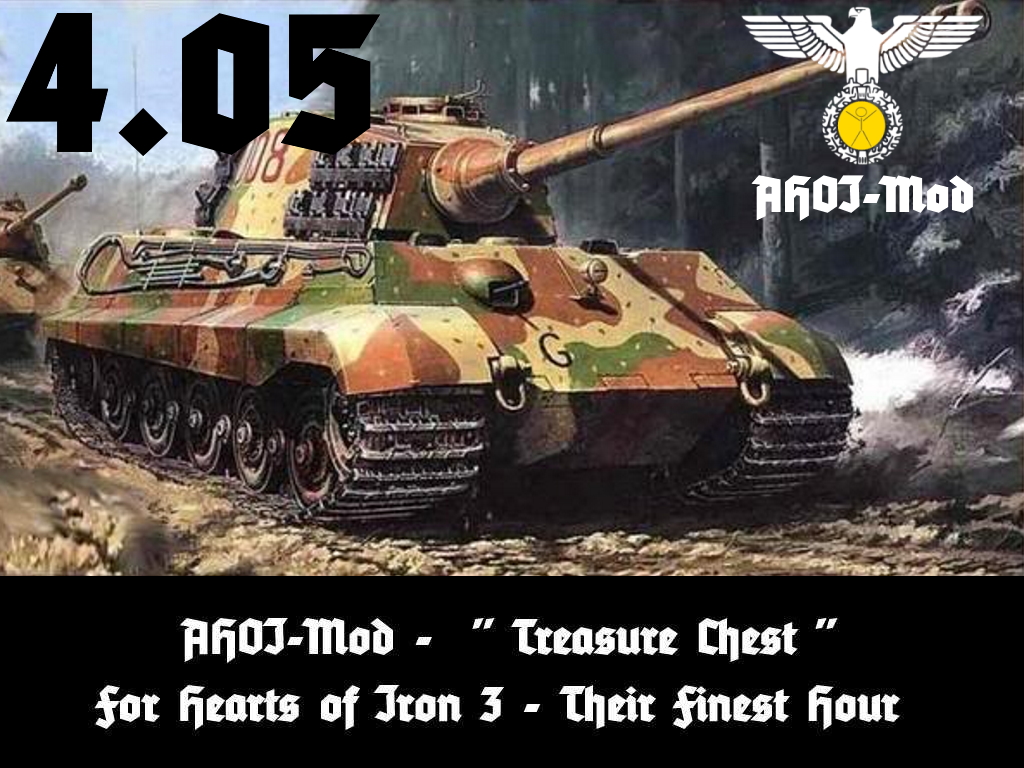 Ahoi!
It is done, the first version after ~5 years.

(Click on the wrench above for the latest version.)

The last Ahoi-Mod was the version 4.04 from Dec 22, 2015! I did work on the mod since, but didn't kept note of the many changes. Below you find at least the changes from this summer of 2020 and all that I wrote down for the previous versions.

Generally seems SOV to bee much harder to defeat. The mud-events give you 2 times a year a logistic hell and movement is slow. Also it will stall even the fastest Computers. Maybe put down game speed and hope for better weather.
Also generally I propose to save every 6 month and reload the game. Best to restart the whole game, as that seem to bring new life to the ai. Also don't forget to check the other major powers like USA/JAP/ENG/SOV/GER to see if the ai felt asleep there. Check the stance of teh Theatre HQ's, and if it is "prepare" you can wait forever for the support of e. g. the USA.. Sadly this is tied to the strategic ai and can't be modded.

Map:
Connection between Stranaer(ENG) to Larne(IRL) is gone. Transports needed now. ENG was buiding up way to much units there for nothing..
Bornholm lost its harbour. With harbour it is a potential target for stupid ai invasions.

Research
Militia_infantry is gets a research bonus from infantry theory and intantry_practical, changed to militia theory and militia practical.
Infantry_activation is a 1910 tech, but requires inf:militia_infantry-2 a 1930 tech- changed

Lua-ai
SWE will not allow military access that easily anymore
But look at GER invading NOR from 2 areas: 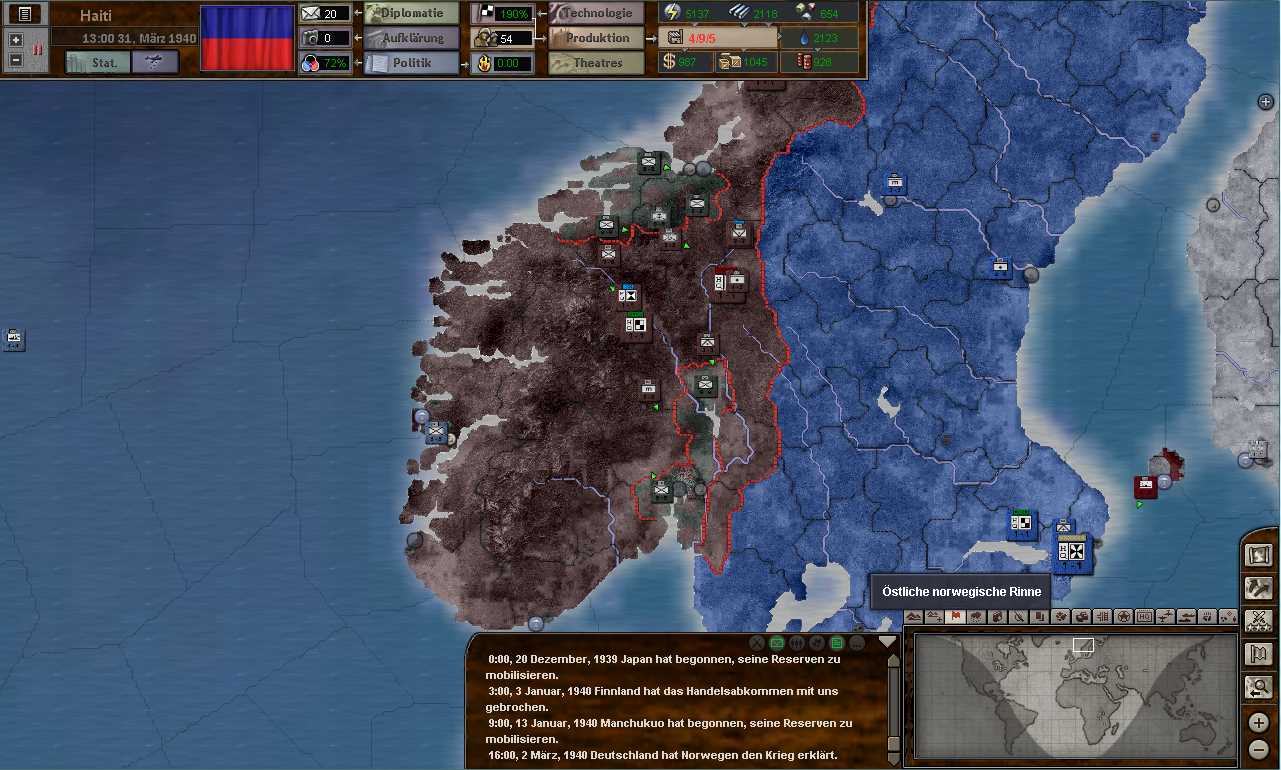 JAP is preparing earlier a war in the pacific
ITA will prepare earlier for a war with FRA
ITA will mobilize sooner
ITA will attack GRE only after YUG is gone
SPA will join axis if London has fallen, ENG is axis or SUEZ is under axis control

Units:
Hvy tanks have some less org-simulation of increased maintenance

“Patchlog 4.04:”
All over all I’m not quite sure what much I did since last official version of 4.02c. I was in a major overhaul as I had to stopp modding in October 2015 and now just wanted to share what I’ve done since. Lets have a look at what I remember:

12,232 changed files
Many of them only provinces wich got railroad switched with roads to trick the engine. Infra lvl wise nothing changed. trick didn’t work so I need to do it the really hard way and implement anoter more work intense solution. But then we’ll get also highways and maybe another type of railway that was only “planned” by Germany..
All you need to know is, RR give actually the old Infra bonus from roads and vice versa!

But also:
-MAN should now declare war against NatCHI and Japan only fully joins in later.. I had also done quite some province changes, e.g. in China to help the ai do a more historic war over there. But it is not done/balanced yet.
-OOB’s were adjusted
-Techs slightly adjusted
-Added some of deltablues additions for unit modells.
-Added some of deltablues techs pictures for some techs.
-Added “Hjalfnars Marine update” for better historical ship start techs.
-Added some own changes for FRA ships according to “Hjalfnars Marine update”.
-Tweaked unit upgrade paths
-Changed some dependencies path drawings in Pz-Tech screen
-Changed production limits of units to work some better.
-Tweaked some techs stats(start date, gains).
-Units give more practicals so you don’t loose to much production experience anymore.
-Unit counters got new wooden look
-Changed loading screens again, other cool pics..
-Changed some text for UI.
-Tweaked some values in static_modifiers
-Tweaked some values in strategic_resources
-Tweaked some values in defines.lua
-Added some events to help divide Yugoslavia between axis powers to prevent supply problems.
-Added Rasputitia. You will have two times a year a severe problem with suppy in center russia because of the mud season.
-Added Huang He flooding. As CHI flooded the Huang He river to slow down the JAP adavance, you and the ai can do that now too.
-Added a new system on how to install the mod to have it easier for all of you to install the mod and being sure to have it done right.

And propably much more..

Patchlog for 4.02c:
-Changed loading screens again, other cool pics..
-Added description(tooltips) for new buildings
-Added description(tooltips) for new buildings decsions
-Fixed some typos and oddities with some technologies wich were reported
-Added some bonuses for techs that were only prerequisite and had only malus so far.
So with some produktion techs you get now boni and also can reduce the build cost/build time of units. So no longer 4 years builds for modern ships, but 2 years are possible now with the right techs.
-Added ship gfx for naval combat view.(MTB, all carriers, PocketBB)
-Added gfx for new buildings in production view
-Fixed percentage values for max amount of units being buildable.(Paradox bugged it, so that needed a workaround..)
-CGM-Mode should work now with all countries.
-Switched gfx for pause/speed up/speed down, so that is usabel as before again.
-Added first changes for Models and pics of those(Still very generic..)
-Changed slightly the dynamic ai decsions
-Production ai slightly changed to have more land units build earlier, and have a better building for minors.
(Overall less ships will be build.)
-Changed sunk ship list font colour to white again.
-Changed some dmg modifier for air combat critical hits(nerfed it ab it)
-Raised new leader org hit and some more little tweaks here and there..
-Some more I didn’t wrote up..

Patchlog for 4.02b:
-I hope I patched all reported bugs.
-Counters changed to have no more borders around them.
-The new feature of TFH of Penetration/Armour are implemented.
-The new feature of TFH of Tactics is implemented(Doctrines)
-Some technology errors solved.
-Some technology balancing.
-Technologies like WW1 planes are now integrated. (WWI Scenario will be added some later..)
-Changed productions Lua.
-New buildings are finally in:
If you build a port or airport, you get a naval base/air base for free every two steps via decsions you can take.
Military buldings can be build faster then the civil part, but military bases are needed for rapair/refuel, civil buildings add IC/Infra.
Railroad networks are added. A railline is easier to be bombed/dmg in fights but allows more supply.
Heavy Industries will later be tied to production capabilities of tanks in the same way as ports/airports needed for air/sea units.
-CGM-Mode should work now with all countries.
-Some more I didn’t wrote up..

Feedback wanted!
I'm still just one person doing this. So you help me much with just pointing out to things you find worth mentioning.
Please help and add a note here in the forum about what you would like to do, so we don't have unnecessary double work. To have all feedback focused in one place please use this forum:
Ahoi-mod.forumotion.com
In the file "AHOI-Technology help.txt" you can read how easy it is to add new descriptions for techs and add pictures for them.
It would be nice if you can help me with the descriptions and techs for the tech-tree. Maybe you can just take a branch you like. Thats not hard work but much if I do that all alone. A little how to was done and some already helped with this. A very big thank you to all who helped me so far! Still it is much left to do. Just let me know that you like to help. You can use the forum above, or use another forum, facebook, twitter..

Have fun with the newest version of the Ahoi-Mod - Treasure Chest 4.05!