Check out the new features - and help us create some Missions to get the game for free!

Ok... In my last news post I wrote that we planned to release Space Ranger for Windows in the beginning of September 2013.. That never happened, because we decided to add a lot of new features and content to the game before the Windows release.

Now we've reached a point where almost all the new stuff is in there, and we're doing the final tests, bughunting and polishing. So i thought it was about time i posted some news! :-) But before i start my endless babbling, please enjoy the new trailer video:

Name change
As the creative part of the game has become much more user-friendly, and is a much bigger part of Space Ranger now, we decided to change the name to 'Space Ranger - Arcade Shooter Kit' or Space Ranger ASK, if you prefer. Along with that we made a shiny new logo:

Free version
Along with the fully featured version, we'll release a free version, which will have ALL the features, except you can only play and edit the first level of every Mission, and the Import function is disabled. This gives you 15 levels to play, and the option to create, play and export unlimited levels.

New game objects added
- Repair Station, fixes your ship when hovering it
- Mining Station, mines asteroids into shiny coins
- Dropoff Station, let's you drop off rescued spacemen
- Teleport Station, transports your ship to another location within the level
- Tiles and Tilesets - a flexible system for creating cool level backgrounds
- More ground objects and targets to shoot at
- Railer - allows you to create paths for the game objects
- Shadows - make the game objects cast shadows on the ground
- Passive targets - sitting ducks that don't shoot back
- A large pile of new Spawner and Decoration items

Here's a few screenshots featuring some the new stuff: 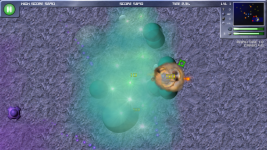 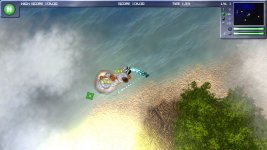 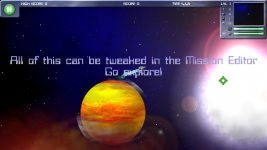 Mission editor
- A nice tree-view format, providing a nice overview of your Mission
- Level Decorations - for creating some awesome atmospheric levels
- Mission Resources - a Mission resource library to be used across your levels (for now it's only used for paths)
- A lot of new controllable options, like Opacity, Rotation, Speed, Depth, Position, Color scales, Size and more
- Easy Import/Export functions (man, this saves time)

A few shots from the new Mission Editor: 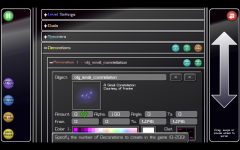 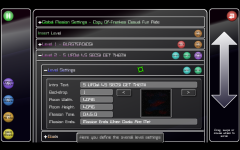 Special Effects
One of the efforts to optimize the game performance actually allowed us to create some amazing screen distortion effects. Notice how stuff explodes in the trailer!

New Game Options
- VSYNC switch
- Windowed/Fullscreen switch
- Back buffer (draws everything to a separate surface, optimizes performance on most devices)
- A lot of quality settings, allowing you to run the game on really slow devices

Release date
Well... we're aiming for some time within the next 2-4 weeks! ;-) Track the game to get notified when it's ready for download!

WANTED: Mission Designers and testers!
We need some dedicated people who wants to help create some awesome Missions for us to include in the release. You will of course recieve the game for free, in exchange for some cool Missions. If you're interested, please contact me!

Thank you for reading! We hope you like the new stuff! :-)