Introducing the first trailer for Tribe Of Pok, along with the release of the Alpha 10 update. Now also available on Itch.io!

Posted by PokingWaterGames on Oct 23rd, 2015

Introducing the first trailer for Tribe Of Pok:

It's amazing how long it takes to make a one-minute video. You have to plan out each scene, then go in-game and shoot it. Then you realise you need special debug functionality to capture the scenes you want, so you have to program those in. Luckily a few of the scenes happened naturally in the course of gameplay (and I happened to have a recent save handy so I could replay it over and over). Add in effects and overlays, and you end up with a good chunk of time taken.

It was an enjoyable learning experience, I think I might create a few more tutorial-type videos showing how to play the game. As for trailers, I probably won't make another for a while unless an awesome idea grips me. 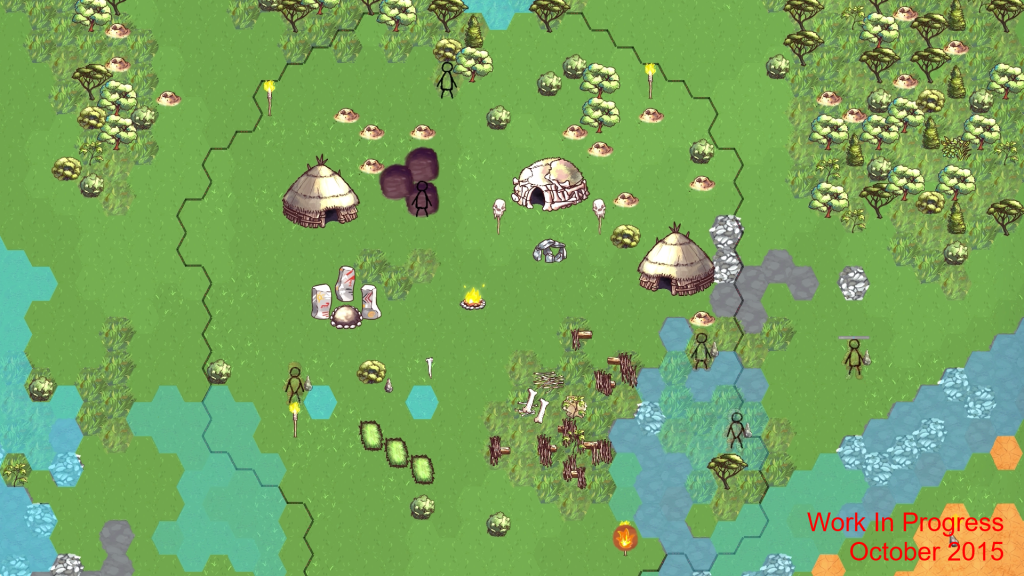 Of course this month wasn't just spent making videos, there's also been a few substantial changes to the game.

Animations have been improved using the animation system I implemented last month. Animals push and shove as they fight. Trees sprout into existence and fall over when they die. The good thing about this system is I can stretch, shrink, offset and transform existing images to create the illusion of movement/action without having to create lots of separate sprites. I can use mathematics to bounce, wiggle and shake objects which I'm more comfortable doing rather than blowing the budget on animations.

Some work was done on the new player experience as well. Tutorials pop up now to ensure the player doesn't miss them, and I've also added more tooltips. One fairly big addition is tooltips for extracting, harvesting and butchering. When you hover over a hex with a designation active, the tooltip will tell you what the output will be if you assign a task there. E.g. click on the Extract designation, hover over a tree and it will list wood and twigs as the product. Once you've cut down the tree, hover over that same hex again and if there's fertile ground, it will list grass as the product. The tooltips are context sensitive. Here we have an example of hovering over the same tree when Extracting vs Harvesting. You can see the different outputs depending on the context:

By the way, the game is now also available via Itch.io!