I've added a couple of new features to Twist this time around, as well as tweaked around with the gameplay speed.

It's Jordan here once again to give you all a short summary of what I've been working on lately. After adding the rogue-mode, I moved onto other elements of my to-do list. First up was adding 2 more blocks; the rotation block and the boost block. These blocks are intended to not cause certain death but be a sure hinderance on the path to survival. The rotation block rotates the player 90 degree in either direction, whilst the boost block speeds up the game's speed, doing the opposite of the Slow-Motion power up. 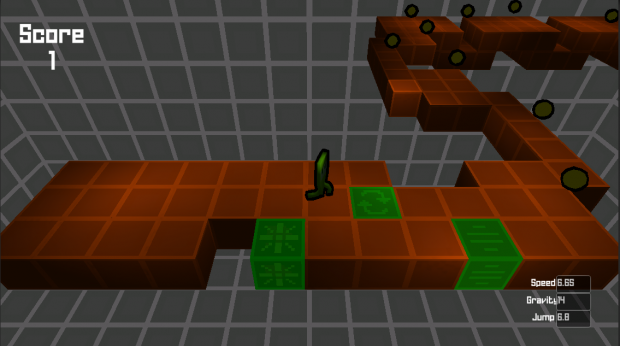 The textures on the blocks aren't incredibly descriptive, but the rotation one is self explanatory, the one with 4 lines is the boost block, and the one that looks like a philips head screwdriver is the jump pad. All blocks in the game will be non-lethal obstacles, with the aim of slowing progress without killing the player. They may also have practical uses within some puzzle environments.

Another area of progress I've focused on has been the power up framework. I redesigned some of the code and got it more organised which is a huge boost. I'm hoping to reorganise the rest of the code and rewrite parts to increase the efficiency of the game also.

I have added 2 new power ups, these are automatic jumping, and wall immunity. Power ups are timed advantages that give the player different extra abilities for a short period of time. The automatic jumping does what it says on the tin, you control rotation, the game controls the jumping. The wall immunity prevents the player from dying on collision with walls. To keep track of the timing of the power ups I added a timing bar to the GUI, it is only visible while a power up is being used. 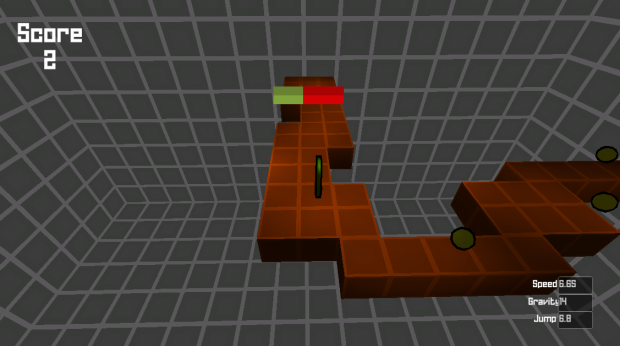 I'm still undecided how the player should be able to get power ups, most likely the player will have to pick them up in-game and will keep the power-up until they use it and finish the level during the play through they used it in. Meaning that if the player uses the power-up but dies, when he respawns he will have that power-up restored, however if the player uses it and then completes the level, the power up will not be restored. Power-ups will either be found in obscure places in the levels, or can be purchased from an in-game store for points. This is still an area where much planning is needed.

Looking ahead towards future development, I will be adding a storyline framework and a level editor. I will most likely clean up a lot of code and build a system to handle the level editor and to open it's levels. I will also have to port the current levels to this new system and add an interface for opening them in-game. that's going to be a huge job so it could take a while in the making. I'll keep it updated on here so make sure you track fi you want to find out all the latest news.

Also, be sure to show your support by contributing to the IndieGoGo campaign, the funds from which will go into developing the game further with new assets and a soundtrack: