I finally took the time to redesign tiles and the way they're rendered. The goals were to:

In Triverse, each part has a power level determined by its proximity to power cores. Power level is one of the most important factors in designing your ship, as it affects weapon damage output, thruster force, and hull strength. Visually, it's indicated by the glow color on certain parts.

Team/faction colors are shown as the overall color of parts, with lighting effects applied on top. This was not feasible with the previous rendering because the power color was applied to the entire part. 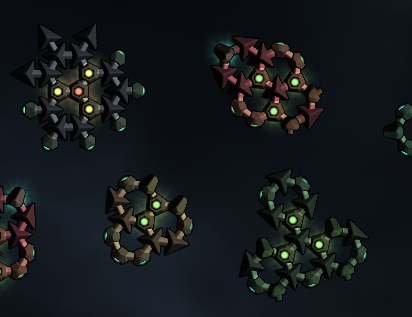 It's difficult or impossible to simultaneously pilot your ship, aim turrets, and repair. Fortunately, autofire takes care of aiming turrets when needed. You can toggle it on or off to allow the AI to control turrets on your ship. For small ships with forward-pointing weapons, this is often unnecessary. For larger ships, while repairing, or when you want to put your full attention on piloting, autofire fills the gap.

As good as it sounds, the real question is whether it's easy to configure. Previously, it was a matter of toggling individual weapon groups or toggling all weapon groups, but I've since decided to make a separate set of autofire-eligible groups. Other groups are excluded from autofire. The result is simpler, and firing can generally be done with two buttons, fire primary and toggle autofire.

So this supports the scenario of building a big ship with a bunch of turrets and one death ray, where you want full control over the main gun but allow the AI to control the turrets. Or you can hand over control of the death ray to the AI too and focus on piloting. This scenario also sounds like a good target for multiplayer, where one player pilots and others are gunners or builders.

Weapon group management is one of the more difficult design areas because controls need to be simple while supporting a wide variety of ship layouts and play styles. Configuring weapon groups should be intuitive and seamless; no additional windows allowed!