Since the last update I've upgraded the game engine, added new mutators for projectile spells, and added some new quality of life features.

It’s been a little longer than usual since my last update, but it’s been for a good reason! I made the jump to upgrade JMonkey engine to version 3.1 which has had a number of performance improvements and more consistent frame rate. Along with the performance improvements, however, it unleashed a horde of bugs which took a lot of time to clear up, hence the tardiness of this update.

After the massive bug hunt I had I was able to spend some time on new features. A few of those new features I included today. The first is your humble climbing rope. I spent several days rewriting the collision code to be more accurate to add new API calls for when you enter and leave blocks. This has allowed me to add climbing rope as you can see below.

A new feature that I have been wanting to add for a long time now is healthbars. Now all damageable mobs will show a health bar if they are below full health. I also added a menu option to disable the health bars if you don’t like them. 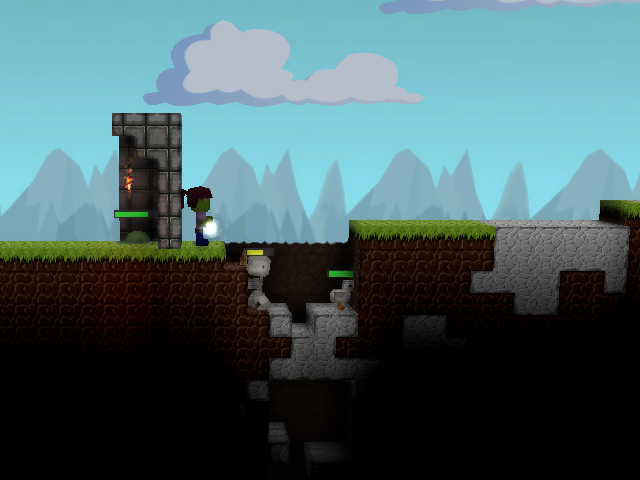 No update would be complete without some new spell functionality. I’ve added a couple of new modifiers for projectiles. The first is split which allows you to split a projectile into multiple copies at the expensive of the spells power level.

Perhaps my favorite of the new modifiers is very similiar to seek but instead of tracking an enemy it causes the projectile to track the mouse. This lets you move projectiles around obstacles as well as create a swarm of projectiles to rain down upon your enemies.

I have a lot of new content coming down the pipe, so stay tuned!

Awesome, keep up the great work! :)