News Update outlining changes to how skills work, Boss Lairs spawning, and welcome to our Composer.

Hello there. A lot has been happening over the last week or so, so I figured I might as well drive right in there with some news:

Soundtrack
The soundtrack for Claustrophobia is now in production, so a big welcome and thanks to Chris Kukla who will be composing it.

New Skill Engine
I've mainly been working on the skill engine, which has come on a bit since the last skill update. The main concept of the skill engine has changed, so skills and passive abilities are now found on one overall skill tree, rather than bound to specific weapons. On levelling up or finding 'Skill Tomes', you gain points to spend in this skill tree, customising different parts of how your character functions. Below, you can see the tree in it's current state: with all 5 skills implemented. Suffice to say, at the end of each branch will be a skill which then in turn branches into different skill specialisation. Each skill will require the purchase of the skill further up the tree. 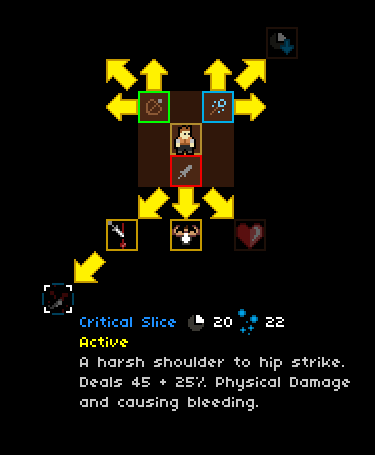 Boss Lairs
Bosses and other power creatures have now been added to the game properly, and spawn in special rooms called Lairs. These rooms are marked by golden doors, which is probably enough warning to tell you you don't want to enter with just a wooden sword...