A new petrol station modeled by our prop modeler has been added in which allows for more exploration in the scene, goals are being though up around this along with the begins of zombie AI scripts and similar progress. New Character systems are on the way including new weapons and more realistic movement including running and hopefully forms of non intrusive parkour to help open world flow. 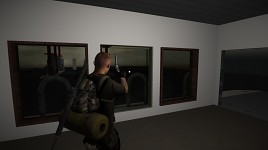 example of one of the new shots from the new scene.